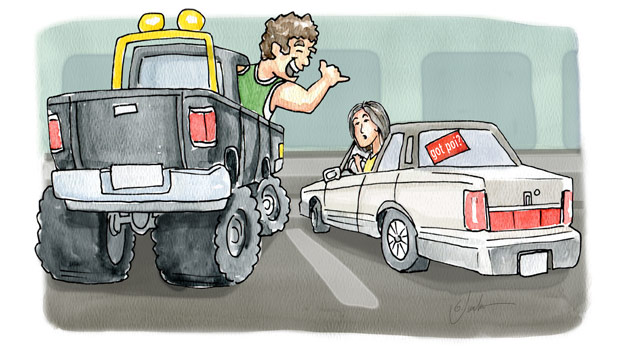 The care package from Pukalani arrived while we were still settling into our newly rented, 1950s-era Fort Lauderdale bungalow. Hot, humid, crowded and endlessly flat, South Florida was a foreign country some 4,789 miles away from home. Despite its familiar-looking tropical setting, something just wasn’t right about the place. There was no mauka to help delineate makai. The plumerias had no fragrance, the papayas had no flavor, and the geckos had no chirp. Even the rice refused to stick together.

That ordinary-looking parcel turned out to be a Hawaiian treasure chest in disguise. Inside were bags of li hing mui, dried mango, chow fun noodles, Kona coffee, wasabi furikake, a bottle of Aloha Shoyu, an Ainokea t-shirt, a “Braddah Iz” CD, and a red sticker that asked, “Got Poi?”

These humble comforts fill me with saudades (a Portuguese term, not easily translated, describing a bittersweet longing for something not attainable). Pidgin translation: “Choke homesick.”

The red “Got Poi?” sticker immediately got affixed to the back window of our white 1992 Lincoln Mercury land yacht. Purchased from our used-car-dealer neighbor, it sorely lacked South Beach chic, but was substantial enough to survive the inevitable South Florida car crash.

Months passed. The red “Got Poi?” sticker went unnoticed, except by a Cuban coworker who asked, “What the heck is that?” Until a routine Saturday morning shopping trip. . . .

Our usual supermarket, Publix, is located less than three miles from our house, but the trip entails a death-defying drive along one of Broward County’s most dangerous roads, Federal Highway. It should be a Florida State Historic Site: the birthplace of Road Rage.

Half-expecting a sniper in search of a random shooting victim, I ignore the horn and refuse to turn around. The light turns green, the traffic inches forward, and again I hear, “BEEP, BEEP, BEEP, BEEEEEP.” Okay, now this is getting scary . . . I must ditch the horn-blower.

I whip into the Publix parking lot and tuck into a nondescript parking stall. Phew, I think I lost him.

A glance into my rearview mirror reveals an ominous black monster pickup truck blocking my escape. My heart is pounding. I hear a door open and slam. I brace myself and turn. . . .

And see THE SHAKA.

The proverbial Hawaiian salute is connected to a very big Hawaiian with an even bigger smile. “Eh, sistah—I saw your poi stickah! You from Hawaii?” What’s this? A local boy!

He tells me his name is Kalani; he’s originally from Oahu, now living on a Seminole reservation near Miami. “Get lotta guys from Hawaii living down here,” he explains. “We planning one hoolaulea next month in Jupiter. You gotta come. Call Charlie Kaleialoha Smith; he da organizer, he’s a Maui boy. Wait, I give you his numbah.”

One month later the white land yacht is cruising a Jupiter beach park in search of a lone Hawaiian flag. We find it flying over a jumble of beach chairs, blue tarps, coolers, aluminum pans and rice cookers. The sound of slack-key guitar and the unmistakable aroma of teriyaki on a hibachi waft through the air. This must be the place.

About thirty of us displaced Hawaiians gather that day. We share food, stories, music, hula, and our saudades for home. At sunset, we gather in a circle, hold hands and sing “Hawaii Aloha.” Tears stream down our faces. For one glorious afternoon a nameless Florida picnic site, marked with a Hawaiian flag, becomes our sovereign land. Home is where the poi is. 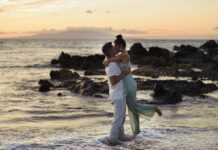 Win a Trip to Maui!