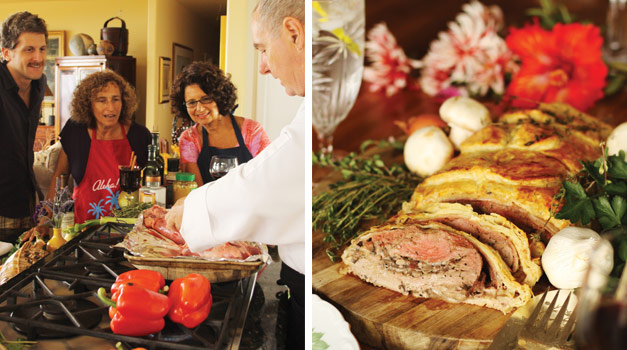 Even the savviest host can find meal preparation a daunting holiday task. We turned for advice to Ralph Giles, the culinary genius behind Catering from Soup to Nuts—and were delighted to learn that even a menu as impressive as beef Wellington, mango sweet potatoes, and bell peppers with scallops can be prepared in advance, leaving the cook more time to enjoy what matters most—drinking hot spiced wine!

Our senior editor, Rita Goldman, was the first on the test-kitchen scene: the Kula home of MNKO publisher Diane Haynes Woodburn. When I arrived at the bucolic setting, Rita was wandering though the gardens, chanting, “I do not cook, I do not cook. . . .”

“Please make her stop,” Diane called from the house, then went back to readying the kitchen.

Before I had the chance to convince Rita that cooking is fun, art director John Giordani arrived with photographer Nina Kuna, on the heels of Chef Ralph Giles and three giant coolers filled with precious ingredients. After hauling the cache into the kitchen, the chef tossed aprons to each of the gathered participants.

“Better put these on,” he warned. “It’s gonna get dirty.”

Chef Ralph revealed steely focus as he rolled up his sleeves and got down to business, starting backward—with dessert and wine. Digging into the cooler, he produced a sack of sliced figs. “Fresh is better but we have these, so . . .” he tossed the sweet dried treats into a glass bowl, added a handful of raisins, “we must add something.” He popped open a bottle of Marsala wine, doused the concoction lavishly, then took a swallow of the dulcet nectar himself.

The figs would continue to soak in the liquor, becoming plump and juicy, while we prepared the next dish. The scent of the wine wafted dreamily into the living room.

“Does anyone want wine?” inquired our hostess, suddenly enchanted. But as Chef Ralph moved to arm each of his students with a sharp blade, he suggested wine should wait.

“Let me demonstrate a simple and effective way to skin and cube Molokai sweet potatoes. Slice off a small portion from the bottom, stand the potato on the flat surface. Now peel the outer skin, working from top to bottom,” he directed.

“I’m slicing away half the potato!” lamented the noncook among us.

“Use the heel of the knife—it’s more controlled that way.” Chef Ralph’s suggestion paid off. Before long, Rita was beaming at the perfect pile of cubed potatoes she had produced.

Chef then demonstrated the best way to coax the peel from oranges, which were needed for both the potato casserole and the dessert. John proved himself a surprisingly skilled prep cook, with nary a hint of pith in his collection of citrus, while Diane confirmed her kitchen prowess by skillfully removing skins from gnarly hunks of ginger.

“I could do this blindfolded,” she proclaimed, “but only after a glass of wine. Is it time for wine?”

Not just yet; it was time to assemble the casserole. 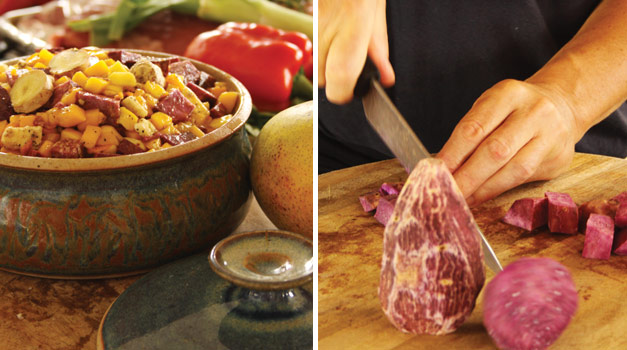 Molokai Sweet Potato and Mango Casserole
Chef Giles adds island spices and locally grown ingredients to this Hawaiian version of the classic sweet potato dish. Use the suggested ingredients as a springboard for your own creativity—think pineapple, coconut, and roasted mac nuts. Serves 4.

METHOD Preheat oven to 350 degrees. Peel the sweet potatoes and cut into ½-inch cubes. Place with other dry ingredients in a two-quart ovenproof casserole and cover the mixture with POG. Cover with lid, then wrap the entire dish in aluminum foil, which hastens baking and makes oven cleaning easier.

Bake approximately three hours, checking for doneness at regular intervals. Add more POG to replace any liquid the potatoes have absorbed. (You can substitute other types of potatoes for this dish; if you use Molokai sweet potatoes, be aware that they absorb a lot of liquid.) Once the mixture is fork tender, do not add more liquid.

NOTE You can prepare this recipe a day in advance and store it unbaked in the refrigerator or bake it ahead of time and reheat it when needed.

VERDICT Yum! This dish adds a festive crimson to the holiday plate, much brighter than you would expect, and the flavors reminded us of both cranberry relish and sweet potatoes in a single bite.  Because Molokai sweets are so nutritious, delicious and satisfying, we all agreed the casserole would make a delicious option for a day-after breakfast. Be sure to make extra! 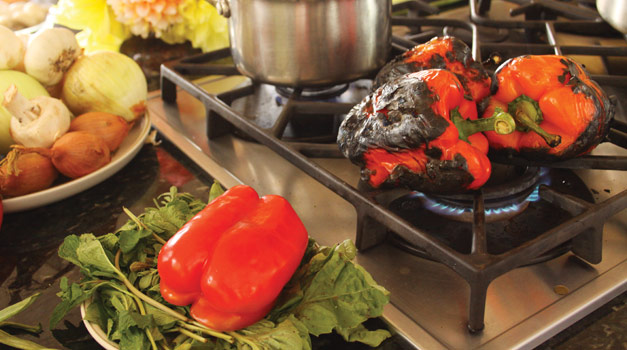 IS IT GETTING HOT IN HERE?

For his next culinary feat, Chef Ralph turned up the flame on the gas range and piled red bell peppers directly onto the fire.

“Those are going to burn!” Rita gasped.

It took about twenty minutes for the peppers to char over the gas flame. Chef acknowledged that the peppers would have charred much faster on a gas grill (or if they were marshmallows), so plan accordingly.

Scallop- and Shrimp-stuffed Roasted Peppers with Pesto
This light but satisfying appetizer of vitamin-rich peppers and heart-healthy shellfish is best served with crusty bread so that not one bit of the delicious and aromatic juices go to waist. I mean, waste. Serves 4.

METHOD Preheat oven to 350 degrees. Grill the peppers over a low, open flame on a barbecue grill or gas stovetop, or under the broiler in the oven, turning until the outsides are thoroughly blackened. Let cool, then pull out the stem and peel off the blackened skin. Slice in half lengthwise, carefully. Scrape out and discard the cores and seeds.

Arrange the peppers cut side up in a lightly oiled baking pan. Spread each pepper half with pesto. Place a scallop and shrimp in each pepper half. Sprinkle with minced garlic and grated Parmesan and bake 10 to 12 minutes. Serve warm.

NOTE Peppers may be roasted ahead of time.

VERDICT This was arguably the simplest preparation on the menu. For minimal effort, it offers maximum impact. The pesto boosts the flavor of the peppers, creating an appetizer that’s as delicious as it is easy. Slightly sweet and deliciously briny, the scallops and shrimp make an elegant introduction to a spectacular meal. Even the garlic-averse among us found the flavors enticing yet mellow. 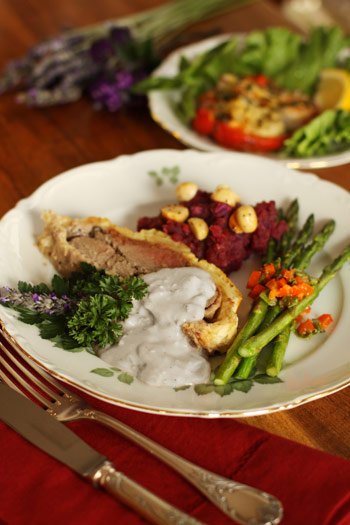 Some claim this luxurious fare was a favored Napoleonic dish; others contend that the Duke of Wellington also loved the beef, foie gras and duxelle combo and ordered it served at the banquet celebrating his victory at Waterloo. (Could there be anything more satisfying than rubbing the face of a certain Frenchman in his own foie gras?)

But since this is the season of peace and goodwill, let’s go with the apolitical theory that beef Wellington was created in the twentieth century for a civic reception in Wellington, New Zealand. It’s no surprise that many claim credit for this creation. It’s fantastique!

TO BEGIN “There are many variations to the recipe, but one thing is always true—you must start with the most elegant cut of meat—the whole filet,” Chef Ralph announced as he held up the gorgeous tenderloin for us to admire.

“Now we must trim away the fat and silvery tissue along with the small ends,” said Chef, showing us how handy a sharp knife and experience can be. (If you’re not as comfortable trimming beef, ask the butcher to do it for you.) “The silvery tissue we’ll discard. The ends we will reserve; they can be used for soup or sautéed for another dinner.” After trimming, Chef had two and half pounds of perfect filet roast about five inches in diameter.

Some cooks sear the roast at this point, then cool and hold it for later assembly and baking, but in his version of the classic, Chef Ralph spared us that step, moving right along to the preparation of a duxelle. This luscious mixture combines butter, shallots, leeks, mushrooms, and Madeira wine thickened with Chef’s surprise ingredient, cream cheese, which he says creates a more substantial sauce than heavy cream can achieve.

METHOD Sweat the shallots and leeks in butter or bacon fat, add mushrooms and wine, and simmer until most of the liquid evaporates. Add the cream cheese and simmer, stirring occasionally until mixture is thick and rich.

Spoon the duxelle over the top of the roast, or use Chef Ralph’s filling technique: slice a quarter of the diameter into the roast on an angle, and by making a series of small lengthwise cuts, roll the roast out flat. Spread filling over all, then roll it back up.

Lay out shingled slices of Parma ham and place tenderloin on top of the slices, covering the entire roast with more sliced ham or prosciutto, overlapping them slightly. (This adds flavor and shields the pastry crust from moisture released by the duxelle.)

The last layer of decadence is liver pate spread over the top of the roast. A thin layer, Chef cautioned. “The flavor is intense, and high-quality pate is expensive. Or you can omit the pate if you choose.”

Next, Chef carefully rolled out two sheets of dough on a lightly floured board, overlapping the edges slightly to make one large sheet, before wrapping the entire roast in the dough like a Christmas package. He cut free-form leaf shapes from the leftover dough to decorate the top of the roast with a maile lei design, then brushed the pastry with egg wash so it would brown nicely in the oven. “A whole beaten egg makes a fine wash,” he said. “I use only the yolk, which gives a glossier finish.”

We could hardly contain our enthusiasm when Chef Ralph popped the roast into the 450-degree oven.

“When the roast registers 130 degrees it will be perfectly done, medium rare,” he announced. In no time, the air filled with the unmistakable aroma of roasting meat and buttery pastry.

I picked up a fork at the ten-minute mark on the oven timer. “Now we turn it down [to 350 degrees] and bake about thirty minutes more.” I reluctantly lowered my fork. Those were the longest thirty minutes of the day.

At thirty minutes, like clockwork, the roast reached the magic number on the instant-read thermometer. Chef Ralph removed it from the heat and let it stand a few minutes longer on the counter, wrapped in foil and covered with a towel, before carving it into a dozen slices. “Letting it rest allows the juices to be absorbed back into the meat, finishes the cooking, and allows the filling and dough to cool slightly, so things don’t fall apart upon cutting,” Chef explained, holding back the hungry hoards by assigning them table-setting duties.

NOTE You can prepare this dish a day or two ahead, but wait to wrap the beef in pastry until you plan to bake and serve it.

VERDICT As we fell under the spell cast by this dish, the sight of it, the scent of it, the sinfully rich taste of it, we all developed a kinship de cuisine. It’s true—the power of community intensifies when people share in the creation of delicious food.

Chef Ralph summed it up: “I tell my students, ‘Here is a recipe, there’s the technique,’ but that’s only the beginning. What makes good cooking is not here,” he said, tapping his forehead. “What makes a cook great is in here,” clasping his hand to his chest.

“You can always taste when love is in the dish.”