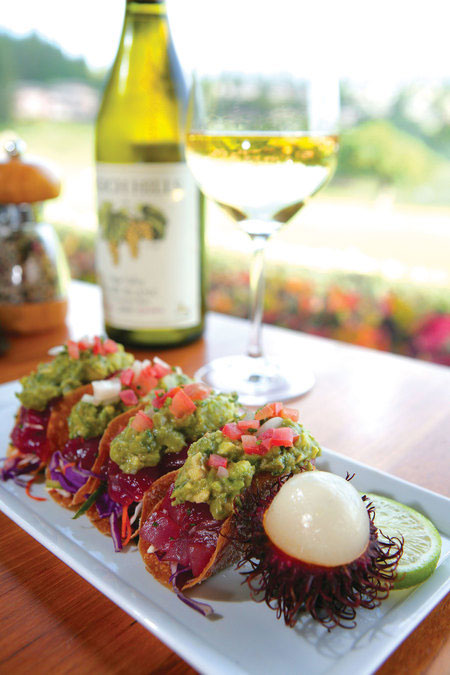 Last November, an international team of scientists issued a dire warning: If current overfishing and polluting trends continue, the world’s fisheries will collapse by 2048. Unless changes are made, “this is the last century of wild seafood,” says Steve Palumbi of Stanford University in a report published by Science. Gulp. More than scare tactics, this report compiles four years of global research and mirrors what we’re already seeing here in Hawai‘i: fewer and smaller fish. No more opihi. Lobsters on the decline. Fortunately, a few local restaurants can help us brave the new world of eating seafood more sustainably. So, for those of you breaking into a cold sweat at the thought that last night’s seafood buffet might be your last, read on.

Sitting in the gorgeous dining room of Pineapple Grill in Kapalua, I’m about to dive into my first all-sustainable seafood menu. Chef Ryan Luckey delivers a mouthwatering appetizer platter—a trio of bite-sized ‘ahi (yellowfin tuna) preparations. The gleaming, ruby-colored poke is perfect. The petite ‘ahi tacos are a zesty counterpoint to the best of the bunch, a miniature version of an instant-favorite entrée: pistachio and wasabi pea-crusted ‘ahi atop coconut-scented “forbidden” rice. Wow.

Great news, considering Chef Luckey’s lean, mean new menu is designed to give the marine ecosystem a break from our insatiable appetites.

Pineapple Grill is the pioneer participant in Maui Seafood Watch—part of a national program developed by the Monterey Bay Aquarium and sponsored locally by the Pacific Whale Foundation (PWF). Seafood Watch produces pocket-sized regional guides to help consumers navigate the waters of sustainable fish choices. You’ll find a Hawai‘i guide in this issue and online (www.seafoodwatch.org). Fish species are evaluated according to how they are caught, where they are caught, how quickly they reproduce, and how all of this affects the health of the ocean. For instance, that yummy mahi mentioned above was troll-caught (a fishing method preferable to nets or longlines that can indiscriminately kill other wildlife). It was caught in Hawai‘i (a well-regulated region) and the species quickly reaches sexual maturity (which allows stocks to rebound). These considerations make it a sustainable choice.

Seafood Watch’s regional guides list fish in three categories: “Best Choice” (green), “Good Alternative” (yellow), and “Avoid” (red). The Hawai‘i guide gives pole-caught akule the green light—as in, go ahead and eat it. Critically overfished Chilean sea bass and onaga (ruby snapper) are in the red—species to be avoided. So are farmed salmon, thanks to farming practices that generate toxic marine waste.

As a Seafood Watch participant, Pineapple Grill agreed not serve fish that are red-listed. Chef Luckey submits his menu to PWF for quarterly inspection. In exchange, the restaurant receives staff training and materials, and substantial free advertising on PWF’s website and onboard its vessels. According to PWF community outreach coordinator Brooke Porter, where to eat is among the top questions asked by boat passengers. The company is happy to recommend an establishment that shares its environmental mission.

So why haven’t more local restaurants jumped onboard?

Sustainability requires some sacrifice. Committing to the Seafood Watch program means abandoning some popular menu items. “The shrimp has been a problem,” says Porter. “Everyone wants to eat shrimp.” Shrimp fisheries and farms are among the worst environmental offenders. Asian tiger prawns—a staple on many local menus—net the highest bycatch of any commercial fishery. Up to 15 pounds of unwanted dead and dying fish are thrown overboard for each pound of shrimp taken. Conversely, shrimp farms are notorious for destroying native habitat and polluting the coastlines of developing countries. Sustainable shrimp alternatives are available, but they’re expensive—a prohibitive factor for many Maui restaurants. “The whole idea of this program,” says Porter, “is to start off with awareness and work towards sustainability. I’d love to say that in five years the Maui seafood industry will be sustainable.”

At present, Pineapple Grill is alone in stepping up to the plate with PWF, though a few island restaurants offer their own versions of sustainability.

Mama’s Fish House earned an international reputation for serving wild-caught, local seafood long before it was PC. “The owner told me when I started, you make sure you serve the best ingredients,” says Executive Chef Perry Bateman. “We can buy cheaper mahi from Fiji, but we pay more for mahi from Hawai‘i because it’s the freshest.”

Since opening its doors in 1973, the award-winning restaurant has listed on its menu the names of the boats and fishermen who reeled in the day’s catch. “We have a very close relationship with our fishermen. Many of them fish only for Mama’s,” says Chef Bateman. (Even the wild salmon, a recent menu addition, was hooked by a local fisherman—a Maui boy who followed his girlfriend to Alaska and continues to fish for the restaurant.)

While the menu at Mama’s isn’t guaranteed to be sustainable, the restaurant’s close connection to its suppliers bodes well—and allows diners the freedom to make informed choices. Often the quest for quality has environmental benefits as well. “We only like to buy troll-caught fish,” says Chef Bateman. “Longline fish [are] not the best quality, because they’ve been out longer.” Fish caught on longlines (hundreds of miles of filament with baited hooks) hang in the water until the boat returns to haul them out. Longline fishing can also result in tremendous bycatch—including sharks, seals, seabirds, and turtles. Troll-caught fish is both fresher and more eco-friendly.

The majority of Mama’s menu items rate as “Good Alternatives” according to Seafood Watch. The delectable Hawaiian snappers—such as the uku (grey snapper) tossed with avocado and Olowalu tomatoes, or the ‘opakapaka (pink snapper) sautéed with white wine and capers—fall in this category. These are fish to eat on special occasions, rather than once a week. A trip to Mama’s, most would agree, qualifies as such an occasion.

Whether it’s a yuzu ponzu oyster shooter in a five-spice sugared glass, or a piping-hot bucket of steamer clams, a meal here will likely land in the green. Oysters and other shellfish are typically farm-raised, but unlike shrimp, these filter feeders don’t require massive food inputs or expel toxic wastes. The menu lists where the glistening bivalves came from—our first sustainability clue. We should further inquire how they were caught. Dredge-harvested, wild-caught oysters should be avoided. Not only are wild oysters known to contain dangerous levels of contaminants such as PCBs, but dredging damages seafloor biodiversity.

Biodiversity might sound like a big topic to bite off when shopping for supper—but it essentially boils down to a few questions: Where did this fish come from? Was it farmed or wild-caught? How was it caught? Using our Seafood Watch cheat sheet, we can easily pick environmental winners off any menu.

“As the richest nation on earth, we have this incredible opportunity to vote with our dollars,” says Ann Rillero, public-relations director for PWF. “We can vote to have fish in our waters for generations to come.”

Check out  www.seafoodwatch.org for the fish list and more information.