War was a common occurrence in olden Hawai‘i, for although the ali‘i (royalty) usually inherited their high status, they had to protect it from ambitious rivals. In Hawaiian Antiquities, scholar David Malo writes that in the chiefs’ inner circle were “those who were expert in all soldierly accomplishments. . . . Many took lessons in spear-throwing, spear-thrusting, pole-vaulting, single-stick, rough-and-tumble wrestling, and in boxing.”

Sham fights were held frequently, pitting one chief’s team against another’s. The chiefs themselves were active participants. Observes Malo, “These exercises . . . were practiced in every period in the different islands to show the chiefs beforehand who among the people were warriors, so that these might be trained and brought up as soldiers. . . .”

Simple yet lethal, the Hawaiians’ arsenal included clubs with stone heads, daggers made from the bills of marlins and swordfish, slashing tools fashioned from sharks’ teeth, and barbed spears whose tips were designed to break off after embedding in the target.

Kai has made all of these weapons, but the scarcity and high cost of materials present him with challenges. For example, when he started making weapons, fishermen would give him teeth from sharks they’d snared, or sell them to him for a dime apiece. Today, shark teeth, when he can find them, cost $3 to $5 each.

Also, it’s illegal today for craftsmen to incorporate whale bone, whale teeth and turtle shells in their work—all of which were commonly used to make implements in the past. Instead, Kai uses cow bone, buffalo horn and boar tusks for his creations.

In addition, several of the most desirable indigenous hardwoods traditionally used for weapons, including kauila and uhiuhi, are now classified as endangered and can’t be logged. Although Kai has permits to obtain fallen trees, he can’t sell products made from endangered species. Instead, he’ll give them to family members and to museums and cultural organizations for protocol gifts or educational purposes. 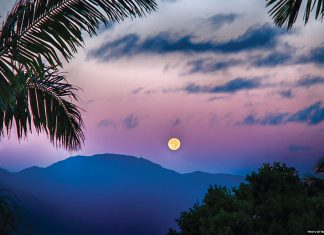 Planting by the Moon

Finding the science behind an ancient, indigenous practice.