“The tiger shark is the most aggressive of the shark species,” Kai explains. “It’s known as the man-eater, so what better mana and kaona [hidden meaning] is there to put into a weapon than that?”

Interest piqued, Kai tried to recreate other mea kaua in the ensuing months. “I’ve kept all my first efforts,” he says. “They remind me of my mistakes, so I won’t make them again.”

Around that time, his mother’s cousin, Kahauanu Lake—a renowned singer, musician, composer and authority on Hawaiian artifacts—offered to be his mentor. Every Saturday morning for six years, he instructed Kai in na mea Hawai‘i (things of Hawai‘i), from hula and history to weaving and warfare.

“It was very important for weapons makers to understand the art of fighting in order to make instruments that were effective in battle,” Kai says. “Depending on their needs, warriors would either make their own weapons or seek out a person who was more skilled in making a particular item.” Knowledge of weaving was essential because many weapons were lashed together with cordage braided from strong plant fibers such as olona. The pïkoi (tripping club) was attached to a slender woven rope measuring up to thirty-five feet long.

From his research, Kai learned that both men and women used weapons. Maka‘ainana (commoners) made simple tools that could also be used as weapons, such as the ‘o‘o (digging stick) and niho ‘oki (shark’s tooth utility knife). The warriors created the ihe, newa, leiomano and other more deadly designs. 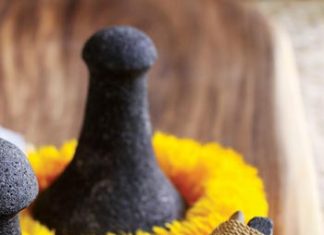 In its twenty-five years, Po‘okela has influenced the community beyond Kaanapali Beach Hotel.