At fifty-eight, “‘Umi” Kai is a respected Hawaiian cultural practitioner and skilled maker of Hawaiian implements, including na mea kaua (literally things of war, weapons). He wasn’t always so closely connected to his roots. “During the summer between my junior and senior years in high school, I visited my brother, who was stationed at Elmendorf Air Force Base in Anchorage,” he recalls. “I wound up attending high school there for one semester. People asked me a lot of questions about Hawai‘i and I couldn’t answer most of them. I returned home, determined to learn.”

Kai traces his fascination with weapons to a leiomano (a shark-toothed slashing tool; literally, “lei of the shark”) that caught his eye in the home of one of his uncles. “It was hanging on a living-room wall, and no one was allowed to touch it,” he says. “When my uncle passed away, it disappeared. I think it was buried with him.”

When he was nineteen, Kai made his first weapon, based on his memory of that leiomano and pictures he had seen in books and magazines at Bishop Museum. With skills limited to what he had learned in shop class at Kaimukï High School, he painstakingly shaped the oblong paddle from a slab of wood from a mango tree he had cut down in his backyard. He drilled holes in the paddle, and used linen cordage to lash twelve tiger-shark teeth to it. 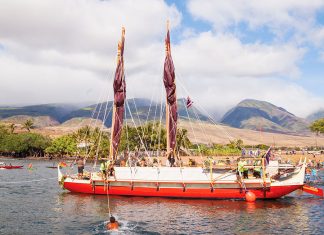 Birth of a Canoe