Samson Harp has the unlikely guise of a tattooed cherub. Five thick lines, like jagged shark’s teeth, darken the left side of the young Hawaiian’s face. But any semblance of fierceness evaporates when he grins ear-to-ear, welcoming guests into Pacific Rootz, his new Wailuku tattoo shop. 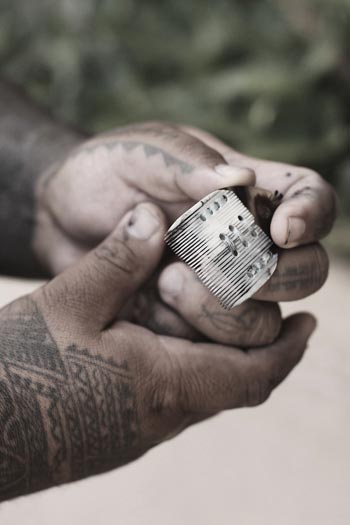 Polynesia gave the world the tattoo—both the art and the word, derived from “tatau” in Tahitian, and “kakau” in Hawaiian. In 1769, Captain James Cook’s crew returned from the Pacific with tales of half-blacked warriors and inked women wearing designs as delicate as lace.

The Pacific Island nations each possess unique tattooing customs. Filipino warriors of old earned symmetrical chest patterns after a successful headhunt. Samoan chiefs still cover their torsos with designs that reveal their rank, while Maori women permanently paint their lips and chin with swirls. But in Hawai‘i, even as modern tattoos surge in popularity, the authentic practice of kakau lay dormant.

Contemporary tattoos bear only superficial resemblance to their source. Traditional tattoos are hand-tapped, applied with the cadence of a heartbeat, rather than the buzz of an electric tattoo gun. Kakau is an active verb: ka, “to strike,” and kau, “to place upon.” It mimics the sound of the wooden mallet hitting the moli, the needle that inks the skin. The resulting mark, or uhi, is sacred. More than mere ornamentation, each symbol and pattern has spiritual significance and identifies its wearer within his or her community.

Harp is a bridge between contemporary and traditional tattooing, as his decorated body bears witness. He got his first tattoo at age nine. The former ward of the state discovered sketching as an outlet for self-expression. His friends, fascinated by tattoos, turned to the natural artist in their midst. By seventeen, Harp was a trendsetting apprentice at a tattoo parlor on Maui’s north shore; skin was his canvas. Riffing off tribal themes he’d seen, growing up in the Islands, he developed a following for his fanciful, Polynesian-style body art.

But when Harp approached Keone Nunes in 1999, it wasn’t to learn from the master Hawaiian tattooist; the hotshot teenager had a bone to pick.

“Mr. Nunes saw a tattoo I gave my nephew and made some remarks that were offensive to me,” says Harp. “I didn’t know anything. I was young, fiery. I looked up his number and chewed him out.”

If Nunes had been an egotist, or Hawaiian kakau were about being macho, the story might’ve ended in a brawl. Instead, Nunes shared his wisdom with Harp. He urged the young Hawaiian to learn his native tongue, which Harp did, over time.

He also learned the meanings beneath the marks he’d been appropriating. For example, the maka ihe, or point of the spear, symbolizes a man’s duty to protect and provide. Canoe builders, farmers, and fishermen honor their kuleana, or responsibility, with particular plant or tool motifs. Animals, such as owls or sharks, might evoke ‘aumakua, or ancestral guardian spirits.

While some motifs are noa, free for anyone seeking protection or healing, many are kapu, restricted to specific Native Hawaiian families. Adopting the mark of the great Maui chief Pi‘ilani, for example, isn’t wise unless you happen to be his great-great-great-great-grandson.

Placement matters, too. Historically, tattoos were placed asymmetrically on the body to emulate the gods and balance male and female energy. As the legs are a person’s foundation, they are the first to be adorned—men on the outside, from ankle to hip, and women on the inside.

“The more we learn, the more responsible we become,” says Harp, who revised his freewheeling approach to ancient symbology. “I started to ask, not can I, but should I?”

For years, Harp pleaded with Nunes for a maka, or face tattoo, but the elder tattooist questioned his motive. Harp got the message. “These marks are for pillars of the community,” he says. “If you wear a maka and you go out drinking and make an ass of yourself, it reflects poorly on all of us. You have to be really humble.”

Simply being Hawaiian was not enough; he had to earn the right to wear it. How? By delving into the rich, cloaked world of kakau and allowing it to transform him from the inside out. 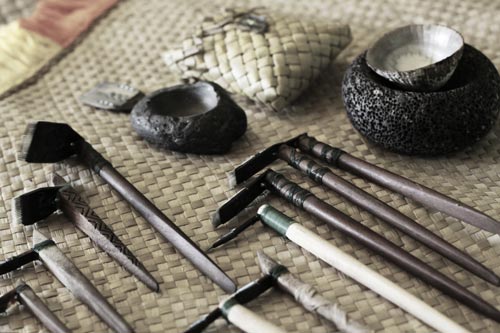 Keone Nunes had no intention of becoming the authority on a lost art. He began tattooing at age thirty-four, during time off from his job assisting indigenous organizations with Federal grant reporting. Quiet, humble, and methodic, he’s almost single-handedly revived the ancient practice of hand-tapping in Hawai‘i.

Unlike Harp, Nunes grew up on O‘ahu’s rural leeward coast, immersed in all facets of Hawaiian culture, including kakau. His aunt had been a tattooist’s assistant and passed the sacred protocols on to her nephew.

“I thought it was common knowledge,” says Nunes. “It wasn’t until my early thirties that I realized not everybody knows the same things I do.”

In 1990, Nunes sought to repair a self-inflicted, botched tattoo, and found that tapping had all but vanished in the Islands. Everybody used machines. A friend recognized Nunes’s unique fluency in the inked language of his ancestors and encouraged him to pursue it. He traveled to Samoa, to study with that culture’s hand-tapping master, Su‘a Sulu‘ape Paulo. He has since tattooed hundreds of people in the ancient way. He doesn’t advertise and he’s selective about whom he works on: those honoring their lineage or seeking spiritual healing.

Appropriately, his studio sits in the back of a Waianae church. Prayer and protocols guide each step of the kakau process, to preserve and enhance the mana, spiritual power, of those involved.

“Whether it’s kapu or noa, each design has certain prayers that go with it,” says Nunes. “Without them, it’s just a design without meaning or mana.” With each tap of the mallet, the tattooist applies his own mana, to summon that hiding within.

It starts with the tools. A set of five small, comblike moli takes a month or more to make. Each is hand-carved, without metal.

“Metal throws everything off,” explains Nunes. “It’s too sharp, too convenient. You might as well use a machine.”

Historically, moli were carved from bird bones or boar’s teeth. Nunes’s molï are hippopotamus tusk. It’s the hardest ivory available and works with his medical-grade sterilization equipment—his sole compromise to modern necessity. The hahau, or mallet, is hewn from native ‘ulei wood; the ink a blend of burnt kukui-nut ash.

Understandably, he treats his implements with reverence. Before working on someone, he’ll wake at two or three in the morning to pray and ceremonially cleanse his moli in the ocean.

Long before that day arrives, the tattoo recipient has been busy preparing. Each person’s journey is vastly different, says Nunes, but typical protocols include genealogical study, prayer, fasting, and abstinence from intoxicants. Nunes might additionally require a person to clear away grievances with family and friends—or learn to speak Hawaiian.

Sound demanding? It is. The process of preparing for an uhi, enduring the pain of its application, and wearing the mark is meant to create an indelible bond between the bearer, his or her community, nature, and the divine.

The tattooist, not the recipient, decides when someone is ripe for such spiritual transformation and what the accompanying blueprint will be. A powerful uhi is something to grow into, evoking both the past and a person’s potential.

“I can feel the person change as I’m working on them,” says Nunes. “Kyle [Nakanelua] is a good example. When I first met him, he was like a lot of other Hawaiians—proud of being Hawaiian, but he didn’t know why. Now he knows why.”

Nakanelua, an airport fire captain and taro farmer, waited nearly twenty years for his facial tattoo, or maka. “It’s one of my greatest treasures,” he says. “Uhi belong to the first people of this land and those who descend from them. It’s not about ‘you can’t have this,’ but ‘is this appropriate to you?’ If your answer is yes, then the uhi, the hidden pearl buried deep within, might take you twenty years to find. It’s not like putting on a design; it’s like clearing away the dirt to allow it to come out.”

The process of receiving an uhi, which also means “covering” or “veil,” is, in essence, an unveiling, a revelation. Through it, more and more Hawaiians are recapturing the living pulse of their proud heritage and discovering who they truly are.

“After the protocols, I felt one thousand years old. It was a rebirth,” says Harp, who finally got his maka four years ago. “Getting my face tattoo is when I became a man.”

Now the father of six, with a seventh on the way, Harp exudes a sincerity and gentleness born out of a firm sense of identity. The practice of kakau opened a living channel that connects him with his ancestors, establishing permanence and continuity in his life.

Working with traditional tools, the molï and hahau, enhances this bond. “When we act upon those motions,” says Harp, “we escape who we are and become our ancestors. We go out of our way to honor them. For me, there’s a spiritual benefit.”

At both of Harp’s popular studios, clients can opt for contemporary or traditional tattoos. Fans still flock to him for eye-popping aesthetic adornment—but if you seek marks of greater depth, you’ll find a willing guide. 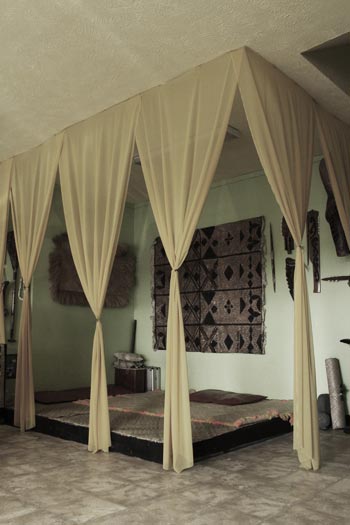