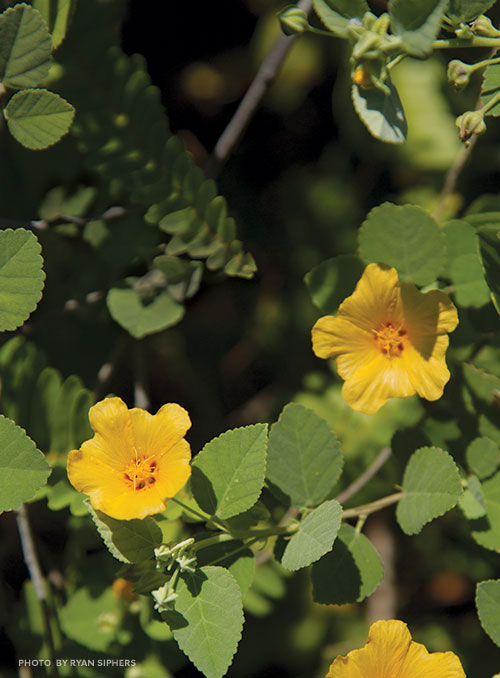 By and large, the story of native Hawaiian plants is a story of losing ground to aggressive alien plants, to the trampling and teeth of introduced animals, and the gradual loss of cultural meaning. Bright, dusky-orange ‘ilima is an exception; it’s actually listed as “a common plant found on all of the Hawaiian Islands.” I know it as the little glowing flowerheads that nod to me in the driest of the drylands around the southwestern sides of Maui. Miraculously, Indian Axis deer — an introduced plague — won’t eat it, even in the parched areas where they have munched the life out of every other last plant.

Sometimes it grows low to the ground (‘ilima papa) and sometimes it is a spindly but hardy bush. In pre-contact times, ‘ilima was also the name for the flat land near a village, and the plants there of the same name were carefully tended as a source of flowers for lei, something that sounds breezy and easy until you realize that it takes 500 to 1,000 ‘‘ilima flowers to make one strand. The ali‘i (chiefs) favored the red and pure-yellow flowers in their lei ‘ilima, so much like the bright tones of their treasured feather lei. All the shades of the flower had names: kuakea for the light-yellow flower, ‘ilima lei for the deep-golden flower, ‘ilima ‘ula‘ula for the bronze flower, and ‘ilima kolī kukui for the rusty red flower — a distinction that tips you off to the value of, or affection for, the plant.

Hawaiians also kept it near the family compound for its purgative and medicinal qualities. ‘Ilima blossoms were given to new babies to stimulate their first, well, poops. For adults, ‘ilima sap and warm seawater went up to induce, ahem, things to come down. Women in labor drank the pounded flowers, a slimy concoction that helped to ease childbirth. And ‘ilima leaves, sturdy but velvety, were the toilet paper of Old Hawai‘i.

While one source says that ‘ilima treated “general weakness,” I myself have to admit to a general weakness for the plant, growing there in the kīpuka (oases) of the lava fields — little gold and orange sparks, fortunately still common. 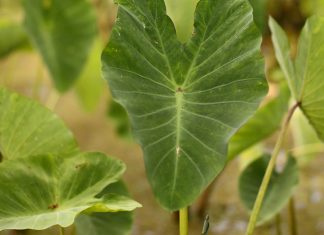 How food is grown, prepared, and used is arguably as important in defining a culture as lineage, language and lore.