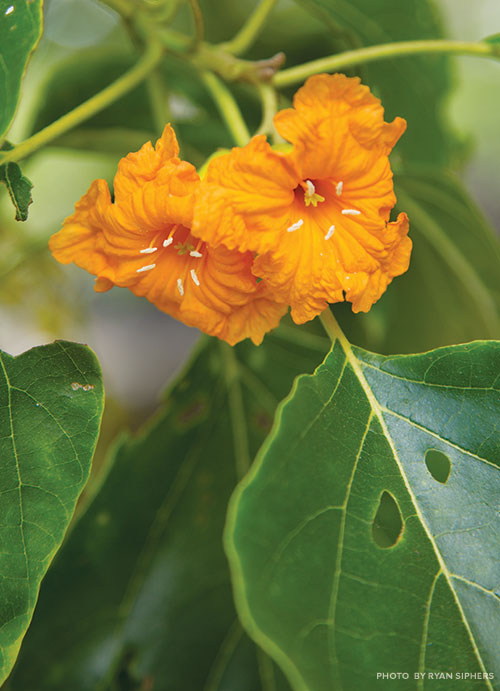 Botanists have recently decided that kou is a native plant, based on fossil pollen evidence. It is a tree that the modern world has overlooked, but that the Hawaiian world treasured. It was in a celebrated kou grove in Lahaina that the ali‘i Ka‘ahumanu gave permission for the first Christian sermon in Hawai‘i, but today very few kou trees remain. I find them standing lonely and proud around former village sites on Maui, generally along the coast. There is something about the orange-red visual tone of the flowers that first talked to my heart, flowers that were prized in lei. One ‘ōlelo no‘eau (Hawaiian proverb) tells of a rude young chiefess who repeatedly demanded a lei kou of an old woman whom she misjudged to be a nobody. The crone was in fact a sorceress who called sharks down upon the imperious young woman as she reclined in a tide pool.

Kou is best known for the beauty of its cream-and-caramel-toned wood, with fine grain that swirls and pools. Beautiful and useful: kou wood does not impart the taste of itself into the food held by the great bowls and calabashes of yesterday’s Hawai‘i. Carvers loved how easily it was worked. Parents would thoughtfully and hopefully plant kou when children were born so those children and then grandchildren would have the wood, someday, for carving. Kou seems to own the tones of the warm brown and red spectrum, and a dye extracted from the carefully aged leaves stained kapa. Fishing lines, like all cordage in that time, were made of organic fibers. Salt water was tough on fibers, but kou dye applied to fishing lines strengthened and protected them. And as long as one didn’t go around demanding that old women hand over laboriously crafted personal items, you might assume that the sharks would leave the fishermen alone. 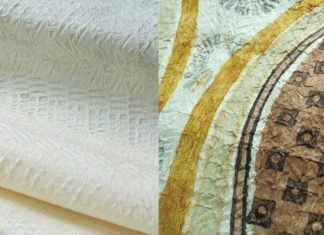 This story straddles centuries to look at authentic Hawaiian clothing prior to Western contact, and how three young Hawaiian entrepreneurs are incorporating ancient meanings, patterns, and knowledge into their contemporary apparel.