I remember reading a sailor’s account of a walk he took on a Hawaiian island after long weeks at sea. It was the early 1800s, post-Western contact but before the epidemics that would roar through the Hawaiian world like wildfire, emptying out its communities. That sailor walked all day, and not once did he lose sight of the orderly villages and farms that lay along the shoreline, as well as high on the slopes and hillsides.

Hawaiians, though celebrated fishermen, were also deeply rooted in the uses and importance of plants. As inhabitants of the most isolated islands on Earth, they
had to be. They carefully carried several plants to Hawai‘i from elsewhere in Polynesia — “canoe plants” whose uses and stories were essential. Other plants were endemic,
and evolved to fit the island ecosystem precisely; their uses and stories would unfold as the need for them arose.

But why would stories be essential? For a culture that had no writing and no history books for reference, stories were a way to personify and anchor in time the meanings and importance of events, people and, in this case, plants that fed, housed and healed the community.

Pre-contact, Hawai‘i’s intense isolation made it a laboratory where evolution ran wild. Many plants arrived here via the wind and waves, or on the wings and feet (and in the digestive systems) of birds. They changed over time and became unique to this place. Without animals to chew or trample them, some plants lost their hardiness or their thorns or their “mintyness,” which in plants is a  natural repellent. Now imagine those vulnerable plants when foreign invaders (people included) arrived.

At Maui Nui Botanical Gardens, those precious endemics are sheltered, nurtured, cultivated and shared. The Gardens is also a haven for indigenous plants (those found naturally here, and also elsewhere) and is a locally famous repository of canoe plants and their intertwined histories. Here are just a few. 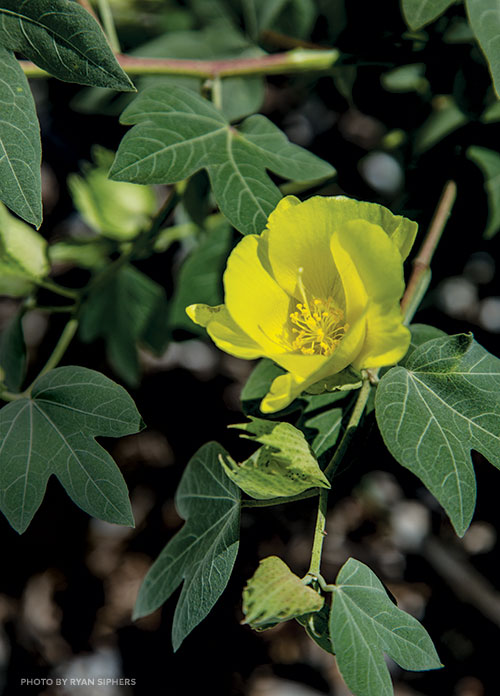 otton is not a plant you’d expect to find in Hawai‘i. Its vast continental history conjures images of industry and empire, slavery and war. But Hawai‘i’s native cotton has been here all along, dotting the coast and sunning itself, sometimes spreading up and out into bushes eight feet high or more, covered in fluffy white bundles.

Hawaiians did not use cotton for cloth in the way western world did. They stuffed pillows with the bolls and used the leaves and flowers — with a little egg white thrown in — to make green or yellow dye for kapa (barkcloth). Dried ma‘o flowers were also used medicinally as a remedy for severe stomach cramps. The name ma‘o is a contraction of the Hawaiian ‘ōma‘o (green), and that is also the name of a native Hawaiian thrush with a greenish sheen on its feathers.

Despite the impressive historical resume of its continental cousin, Hawaiian cotton actually saved the mainland industry when it was hybridized (bred into commercial strains). Why? Insects were not attracted to it in the same way. And so, like hula and surfing, ma‘o was a small but mighty Hawaiian contribution that helped shape the modern world.