When the 2009 Grammy Awards air on February 8, island artists will once again vie for Best Hawaiian Music Album. Most will be looking at long odds, because the many schools of Hawaiian music are pigeonholed into a single Grammy category: Folk Music. And every year of the award’s existence, a slack-key guitar compilation has claimed it.

Given the richness and diversity of Hawaiian music, that’s a recipe for controversy.

The arguments take place among the musicians, and within the Hawaiian community. Keola Beamer demurred about his own Grammy nomination last year for a slack-key album of arrangements of Western classical selections. “To call [this album] Hawaiian music is not really pono [appropriate].” The Office of Hawaiian Affairs periodical Ka Wai Ola has complained about the lack of Grammy success for “olelo Hawai‘i,” authentic Hawaiian language and vocals.

Even Paul Konweiser, Grammy-winning slack-key guitar producer, told me, “While I feel that I’ve made some sort of contribution to Hawaiian music, I am uncomfortable with the fact that I have three of these [Grammys] on my shelf and fabulous musicians like Amy [Hanaiali‘i], Raiatea [Helm], Ledward [Ka‘apana] and others don’t have one.”

It took more than a decade for Hawaiian music to get even this limited Grammy recognition. Intense debates   persisted over the proper balance of Hawaiian language in a Hawaiian album, and which schools of music should be considered truly Hawaiian. The ultimate decisions—Hawaiian must be present on at least 51 percent of a vocal music album, and instrumental albums should contain traditional musical elements—were compromises meant to maintain authenticity while being flexible enough for contemporary albums. Given how relatively few albums were submitted, Hawaiians, like Native Americans, were granted only one award category.

As a result, the first year’s nominees were a wildly varied Who’s Who of Hawaiian artists, including Keali‘i Reichel, the Brothers Cazimero, and producer Charles Brotman Jr.’s Slack Key Guitar Volume 2, which took home the Grammy. Since then, the Masters of Hawaiian Slack Key Guitar Concert Series, released by Daniel Ho Creations and produced by Ho, George Kahumoku Jr., Paul Konweiser, and Wayne Wang, has won for three years running. 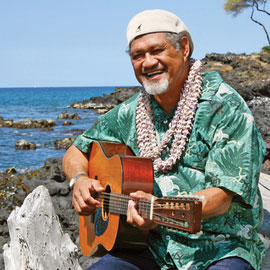 No one denies that slack-key (or ki ho‘alu—“loosen the key”—referring to the form’s open tunings) is a glorious Hawaiian school of music. Its greatest players, like Gabby Pahinui and his sons Cyril, Blah and Martin, are local musical icons. But the way slack-key has run the Grammy table every year has many fans complaining about Hawaiian music’s inclusion in the Folk category, along with guitar-based genres like Americana and traditional folk songs. Does that skew the awards toward guitar selections and away from what the Office of Hawaiian Affairs’ Ka Wai Ola calls “the creativity of Hawaiian language lyricists?”

Slack-key may have an unfair advantage, if Mainland members of the Recording Academy prefer guitar-based Hawaiian music that seems relatively familiar. They inevitably dominate a voting process that allows any member to vote in nine categories in which they claim to have expertise, and nominations and winners alike are decided by a direct vote of the membership. The small percentage of Hawaiian members can be outvoted in their own category.

Further aggravating the controversy, Grammy rules state that in a compilation, only the producers take home actual awards, not the artists themselves. Cyril Pahinui’s solo album He‘eia was a 2008 Grammy nominee, but lost to the compilation Treasures of Hawaiian Slack Key Guitar. An unfailingly humble musician who is generous with praise of his musical comrades and ancestors, Pahinui nonetheless told me, “The [compilations] producers won that, not us, and we don’t get the recognition. . . . One compilation, that’s good enough; three, [the Grammy voters] got carried away. . . .”

Still, the Masters series’ three Grammy Awards are in part the result of the sensitive and conscientious production job done by Daniel Ho, who culled years of recordings of Hawai‘i’s best guitarists for the selections, many of which also include traditional Hawaiian singing. His efforts were preceded by the musician/producer who godfathered slack-key’s success: George Winston, whose Dancing Cat Records captured hundreds of performances by slack-key’s greatest artists for more than a decade.

The Masters series also benefited from groundwork laid by Dancing Cat’s Herculean marketing campaign. Ben Churchill, former marketing liaison between Dancing Cat and BMG, describes a yearly broadside that included schmoozing at Tower Records and Borders Books annual conferences, postcard mailings to 1,200 radio stations and thousands of discs to music professionals. Meanwhile, as  guitarist/composer Dennis Kamakahi told me, “We slack-key players were more well-known because we traveled more. If you want to be known outside of Hawai‘i, you have to do that. . . . We spent our life on the road.”

Could one more Grammy category improve the odds for other Hawaiian music forms? “I think if there is a second Hawaiian Grammy, it should go to a noncompilation album,” says Paul Konweiser. “This would ensure that an actual artist gets the award.” George Kahumoku, himself a premier slack-key guitarist, notes, “Latino music has several categories. We should have categories, like Best Hawaiian Female Vocalist.” 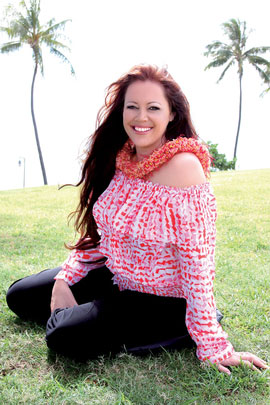 If any artist could catalyze a second Grammy category for Hawaiian vocals, it’s twice-nominated Amy Hanaiali‘i Gilliom, who knows how to shrewdly blend Hawaiian and crossover music, with albums that feature traditional Hawaiian falsetto, hapa-haole [western-influenced] crooning, even rock. “I can read a crowd and give them more jazz, or more Hawaiian. But I also want to make the world understand what Hawaiian music truly is. I try with American pop standards to introduce people to layers of Hawaiian music and its spirituality.”

So she does Creedence Clearwater’s “Have You Ever Seen the Rain?” while explaining that rain is her ‘aumakua (ancestral protector)—and gives the song a slack-key rhythm while she’s at it. Hanaiali‘i’s drive to foster awareness of Hawaiian music and her worldwide tours led Governor Linda Lingle to appoint her an ambassador of music for the Islands.

“Being in the thick of the Grammys was a high honor and an incredible feeling,” she told me. “I’m hoping [the Grammys] will open up to vocals, because language is a really big part of our music.” When she’s second on the bill to newbies to the music like Boz Scaggs and his band, Hanaiali‘i is happy to use her considerable charm to tell them, “I’m in the folk category at the Grammys. . . . Could you vote, please?” She realizes that “Word of mouth is very important. The Grammy ballot is thousands of names you never heard about.”

Yet Hanaiali‘i insists that, “It makes me happier if an eighty-year-old tutu [grandmother] cries at my singing than thousands [cheering] on the Mainland.” Cyril Pahinui echoes that pride: “Just to carry my dad’s name and continue his legacy is good enough for me.”

As a coproducer of the Masters’ series—and thus one of the only Hawaiian musicians to have his own Grammy   statuette—George Kahumoku Jr. may have the most insight and perspective. For Kahumoku, “The Grammys in one way are a blessing, in one way a nightmare, because they divided the Hawaiian community.” He’s done his best to salve the wounds; he’s tweaked the Grammy rule that only producers can accept the awards, by inviting participating musicians onstage with him each year. And he wants to share his good fortune. “In 2008, we had a kickoff party on Maui for Cyril Pahinui. I was pushing for him; I really believe in Cyril, and want him to succeed.”

Kahumoku cheerfully recounts the excitement of the Grammys: the paparazzi shooting pictures of him, the      parties in Honolulu and California, and especially meeting Ringo Starr and Tina Turner “musician to musician.” But he insists that what’s most exciting about the Grammys is that “It’s an honor and a thrill to see Hawaiian music recognized as universal music.” That’s another way of saying that it’s the music fans of Hawai‘i, the Mainland and the world who will be the true beneficiaries of broader and deeper Hawaiian Grammy recognition.

For information on how Hawaiian music can get more recognition at the Grammys, check out Michael Stein’s web-exclusive.