To scientifically measure the rise and set of the heavens—the stars, moon, the sun with its solstices—the Hawaiians possessed a marvelous set of scientific instruments. They had the islands themselves, with their many fixed perspectives on the celestial flow.

For instance, where I live I see the sun set every day. In midsummer it sets over Mauna Kahalawai (the West Maui Mountains), and in midwinter it sets over Kaho‘olawe, and every day the setting moves a bit either left or right. At the equinox, if the horizon is clear, I can see Diamond Head in silhouette against the final departure of the sun into the sea. On the basis of what I have just told you, you can use a map and draw a line straight to my house.

In short, the Hawaiian Islands are superb astronomy tools. But the Hawaiians improved on these natural tools by building stone platforms with carefully calculated edges. These instruments were known as heiau, which people today think of as temples or ceremonial platforms on which the chiefs and wizards would enact all sorts of shenanigans. But mostly they were observatories. As Kalei pointed out to me, the word heiau actually means to “capture” (hei) “time” (au).

Clearly, to follow kaulana mahina requires more thinking than it takes to buy a calendar at Long’s. I see it as a scientific art form whose practitioners have mostly vanished from the earth. When I met with Kalei at MCC, she told me that we had just entered one of these malama pili—one of these extra malama—known as Melemele. 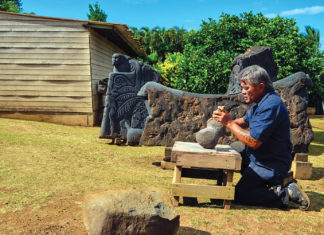 The life of Kālaipōhaku Hoaka Delos Reyes has been shaped by the medium he shapes.