I was instantly reminded of the most important thing to know about kaulana mahina—that it was devised by a culture of open-sea voyagers, people who had studied the sky for their own survival and who knew its features the way most people know how to butter toast.

In each month of the Hawaiian calendar, the moon has thirty phases—each with its own name, its own relationship to the heavens, the tides, the fish at sea, the plants on land. . . . Based on meticulous observation, generation after generation, the kaulana mahina interpreted the ecosystem that the Islands’ first people depended upon for survival.

The moon is a marvelously regular measuring device. The new moon, invisible, rises and sets with the sun. Then, every day thereafter, it falls behind the sun by fifty to fifty-five minutes, waxing slightly larger each evening until “day” fifteen, when, perfectly full, it rises as the sun sets. This backwards-falling continues as the moon wanes and then, with perfect symmetry fifteen “days” later, it once again rises invisibly with the sun. 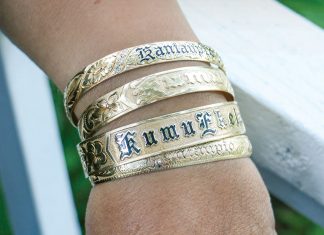 “As Hawaiians, our mo‘olelo [stories] are so important,” says Maelia. “With heirloom jewelry, the mo‘olelo live on in each piece.”