During the early nineties, Kalei went with a group to Kaho‘olawe. In the group were students from Hawai‘i Island who knew an ancient hand-game, a mnemonic or memory device so that children would know the names of each of the moon’s thirty phases. She learned that all children by age six used to know these names—something like our “Thirty days hath September. . . .”—and an old proverb would tease ignorant people by saying “You’re just like a child who doesn’t know the moon.” She decided not to be ignorant.

Today she holds a master’s degree in Hawaiian language from UH–Manoa and works primarily as a researcher for the Edith Kanaka‘ole Foundation. Her kuleana (area of responsibility) is papahulilani, the study of the sky, a task she was given “because of my passion with the moon,” she says. (She wrote her master’s thesis on the subject.) She also teaches Hawaiian language and Hawaiian astronomy at Maui Community College, which is where I caught up with her. She and her astronomy students were gathered on the campus commons under the balmy Kahului night sky. A bullying wind kept whipping our paper sky-maps as we pointed and peered into a slightly misty Hawaiian sky.

We saw mahina in the first quarter or ‘Ole Ku Kahi phase. We admired Ka‘awela (the name for Jupiter at that time), considered a kite-shaped constellation (Pegasus) that preserves the story of rivals Kalupe and Kawelo, strained to see Kio-pa‘a (the North Star), and found the place where Makali‘i (the Pleiades) had just risen.

“Pleiades is funny,” she said. “If you look at it, you can’t see it. But if you don’t look at it, it’s there. It’s a shaka-length away from that tree.” (Shaka hand-signs at arm’s length turn out to be a good way to plot your way through the night sky.) She pointed out the “mariner’s triangle” and said, “You need twenty-one stars to sail by.” 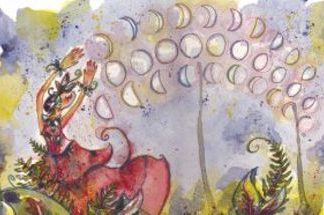 In its wax and wane, Hawaiians of old found the secrets to sustainable living.