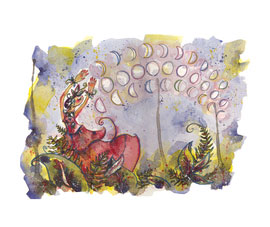 In old days, the Hawaiians measured time by the moon. That methodology, kaulana mahina, is just now being rediscovered. And guess what—in terms of astronomical sophistication it rivals that of the Mayans. Captured in poetry and stone by many generations of kahuna (native scholars), this kaulana mahina holds the secret to sustainable living in these islands.

The agreement that today is January 14th or March 3rd or (you name it) certainly comes in handy. It tells us when to pay the electric bill or what day to show up at the office. Days are numbered like beads on a string that can be taken anywhere and used any place. This admirable simplicity has helped make the Gregorian system (first adopted in 1582) the most widely used calendar on Earth.

But we pay a price for this simplicity. We can stop looking at the sky. We can have “a day” without ever seeing daylight (or moonlight). If you live according to the tides and the rains, the movements of sea life and the liveliness of plants, the cyclic scarcity and abundance of natural resources, you would prefer a calendar that provides more information.

Such is the Hawaiian moon calendar, the system indigenous to these islands. Kaulana mahina—literally, “positions of the moon” (mahina being the word for moon)—kept the human and natural worlds in harmony for centuries until it was crowded out by the gradual Westernization of the Islands. Fortunately we have excellent information about this system preserved in the old chants (including the all-important Kumulipo), in some early histories (such as David Malo’s Hawaiian Antiquities), and above all in millions of pages of nineteenth-century Hawaiian-language newspapers, most of which are still not translated into English. The woman who has embraced the challenge of resurrecting the kaulana mahina is Maui-born Kalei Tsuha.