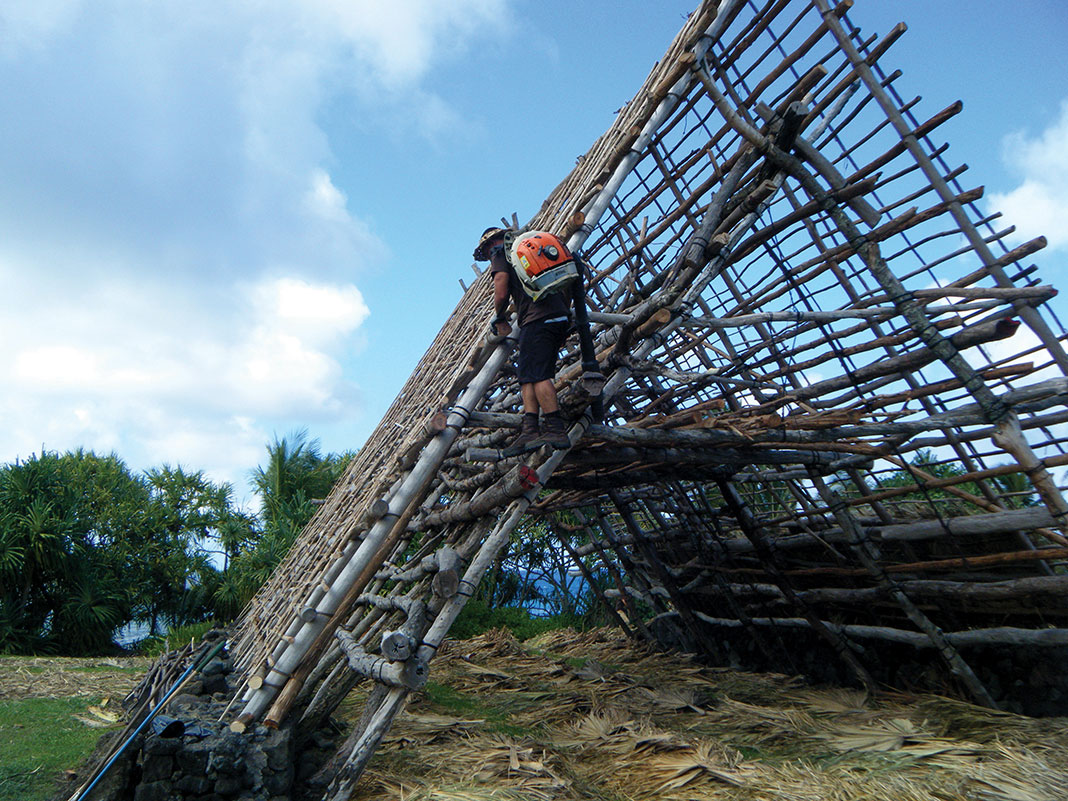 He approached Dr. Rudy Mitchell, at that time an archeologist at Waimea Falls Park, for guidance. Mitchell started drawing the poles of a hale, sketching out the male and female wooden joints, and, “it all came flooding back from that report in sixth grade,” says Sinenci. “Then I really began to study at the Bishop Museum.” For his first small hale, Sinenci used only natural fibers for lashing. (He now uses nylon rope, which is stronger.) “When we use the term ‘Hawaiian hale architecture,’ what we mean is that everything is tightly lashed and the wood is shaped so that it can be notched together,” he says, “Never a nail.”

That first small structure led to one after the other in a cascade of learning and teaching. Today Sinenci has forty dedicated hale haumana (students) in his own hālau (school), Hālau Hale Kuhi Kuhi, with eight alaka‘i (leaders) under him, each teaching four students of their own. He requires his haumana to build six hale before he will certify them; he is the only person in the world who can certify them, and to date he has certified ten. The structural tattoos on his hands signify his unique status and authority. Students range from their teens to their seventies and come from absolutely every background: a woman captain from the Israeli army, a taro grower from Kaua‘i, professors, architects and schoolteachers.

Sinenci himself is in his mid-seventies, and still nimble on the scaffolding of hale in mid-construction. He also travels like a madman, overseeing projects all over the state. “Sometimes,” he says, “before I wake up, I wiggle around in bed a little and try to guess which place I’m in. I rack up a lot of HawaiianMiles.” He even built a hale in China: “You can find it in the book Treehouses of the World.”

The changed ecological face of Hawai‘i means that the original, commonly used trees and grasses are hard to find, or altogether gone. He now uses invasive woods in his constructions whenever possible, and his materials list has a handy acronym for students: IKESOMI, which stands for “Ironwood, Keawe, Eucalyptus, Strawberry guava, ‘Ōhia‘ai, Mangrove, Inkberry.” “For every hale I built in the beginning, I had to go out and harvest the wood myself. Everybody at first thought I was crazy,” he says. Pili grass is rare now, but palms, both native and introduced, are easily found. “Loulu, the Hawaiian word for palm, is now the most common and most available thatching,” he says, “so, just like in the old days, you use what you have.” 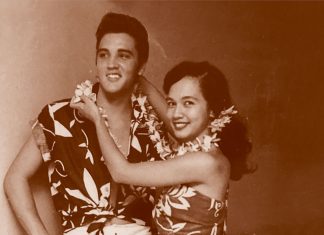 Kumu hula and lei maker, Gordean Bailey has spent a lifetime sharing the culture of aloha.