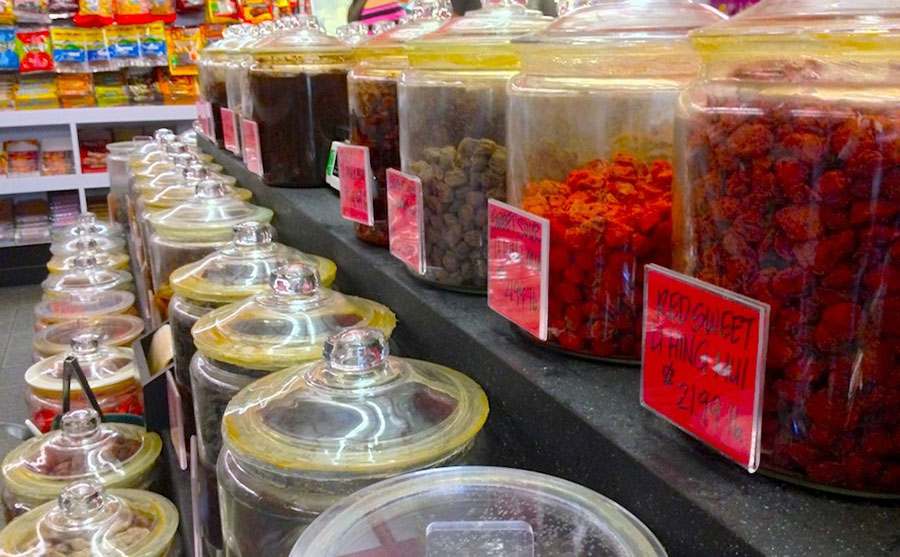 Anyone who knows me, understands and accepts my two vices: a love of scaring people (a la jumping from behind the door or out of closets), and my obsession with li hing mui. The latter might need some further exploration for non-Hawaii folk.

Li hing mui is basically salted dried plum. There are many variations (red, white, seedless, wet, sweet, sweet sour, powder, shredded, etc.), with each having a distinct taste. The classic red version is a bit of sweet, lots of salty and all tang.

DISCLAIMER: Expect puckered lips and ugly scrunched faces upon the first nibble. Which reminds me, it’s meant to be nibbled on, not eaten whole. And don’t eat the seed under all the li hing mui flesh. When my brother in law (who is from Toronto) tried li hing mui for the first time, he hated it. But that’s only because he made the rookie mistake of trying to eat the entire thing—seed and all. This is the same guy who accidentally popped a huge piece of daikon (pickled radish) in his mouth thinking it was pineapple.

While li hing mui is a simple snack found in just about every grocery and convenience store in Hawaii, it has made its way onto fine dining plates over the years. Hawaii celebrity chef Alan Wong is another fan, and has dished up marinated olives with li hing mui as a pupu (appetizer), and a tomato salad covered in li hing mui infused dressing. I also remember having a li hing mui infused tuna roll at the sushi bar that shares space with Wow-Wee Maui’s Kava Bar and Grill.

Why is it a vice? Because it contains artificial coloring and aspartame (artificial sweetener), which has been linked to cancer — although the debate on that is still divided. On a brighter note, Oahu-based OnoPops sells an all-natural version without artificial coloring or aspartame, which you can find here. It doesn’t taste exactly the same as the traditional stuff, but it definitely does the trick.

For Hawaii locals, li hing mui brings back memories of your favorite crack seed store or after-school days spent snacking with friends. But for those unfamiliar with this bite-sized wonder, it is often described as “an acquired taste.” If you fall into the second category, don’t worry—there’s more than one way to try li hing mui.