Geologists tell us that Haleakala, the 10,000-foot volcano that comprises East Maui, is 2 million years old, give or take. Imagine the field day evolution has had, designing and clothing this mountain. Hawai‘i, growing from the sea as it does, has never touched any other landmass, so all of its biological children are spin-offs of the first lucky landers. Evolution, a little drunk on isolation and possibility and time, made the plants and insects of Hawai‘i unique, and so diverse that we are considered one of the best places in the world to study the outcomes of natural processes. All of the creatures on these pages are endemic — found nowhere else in the world. And that is because they were created here. 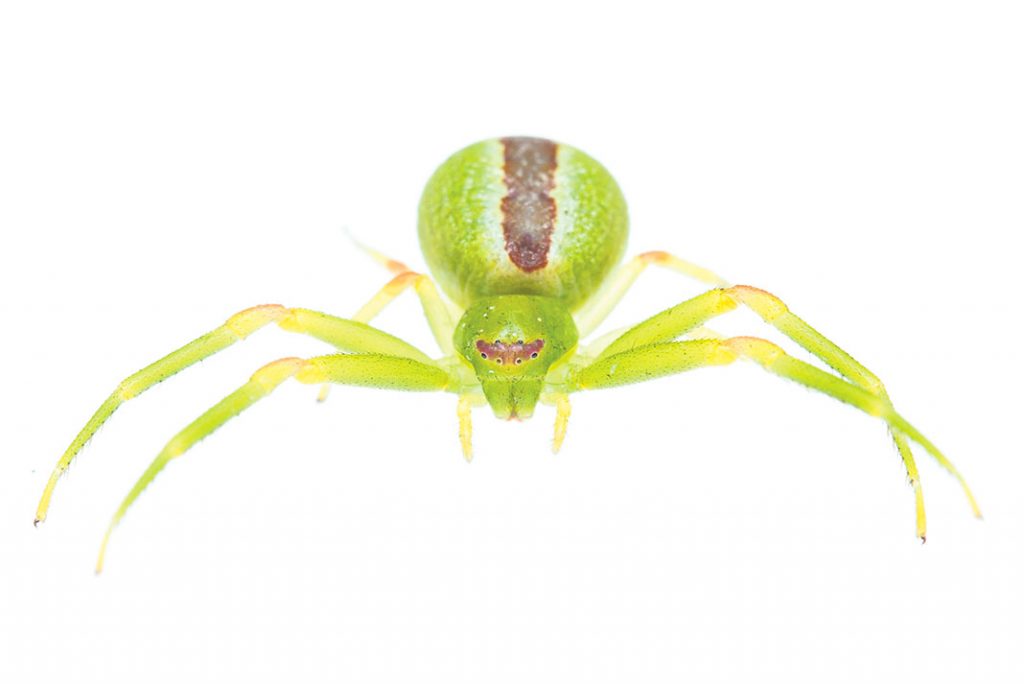 The family Thomisidae, to which the endemic masked crab spider (Misumenops vitellinus) belongs, has been in Hawai‘i a long, long time. It is a vast family of many species, all of them descended from one fecund pioneer millions of years ago. Perhaps that long view helps her to be so patient as she waits, delicate arms wide, for dinner to land all unsuspecting on a flower of the Syfelia plant (not pictured), a plant that has been her hunting ground for so long that she matches it, green for green. In fact, when full of eggs, her tender abdomen looks a bit like one of the Syfelia flowers, too. Longtime married couples tend to look alike after a while, don’t they? 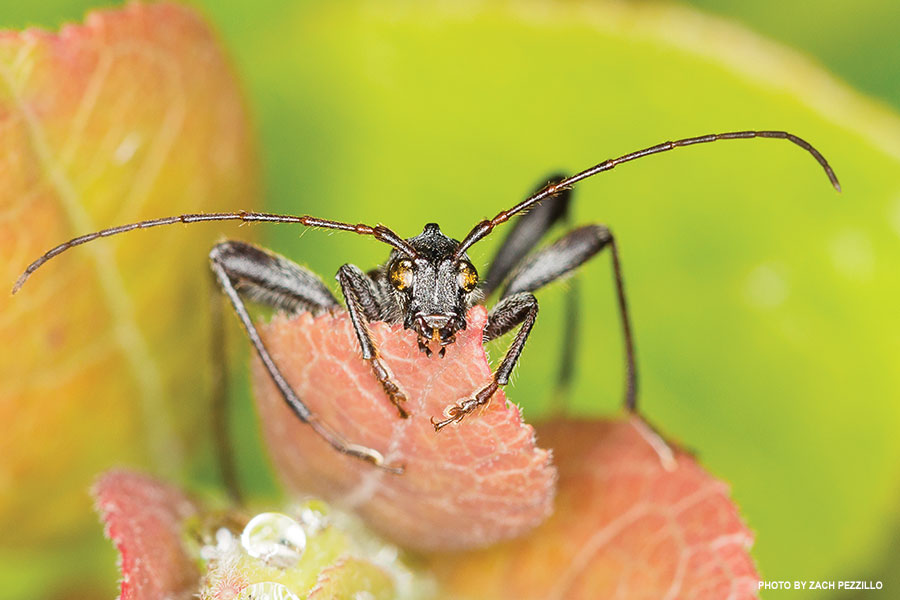 Meet Plagithmysus funebris, our native longhorn beetle. It is a wee creature with a slim waist, measuring a tidy 3/4 inch. No fewer than 116 species of this beetle are found on Haleakala from sea to summit, all of them descended from one fortunate founder. Showy antennae are sometimes as long as (or even longer than) the beetle’s body. Longhorn beetles live quiet lives under moss on bark while their larval children, securely burrowed into branches, await the day they will be old enough to sport magnificent antennae, too. 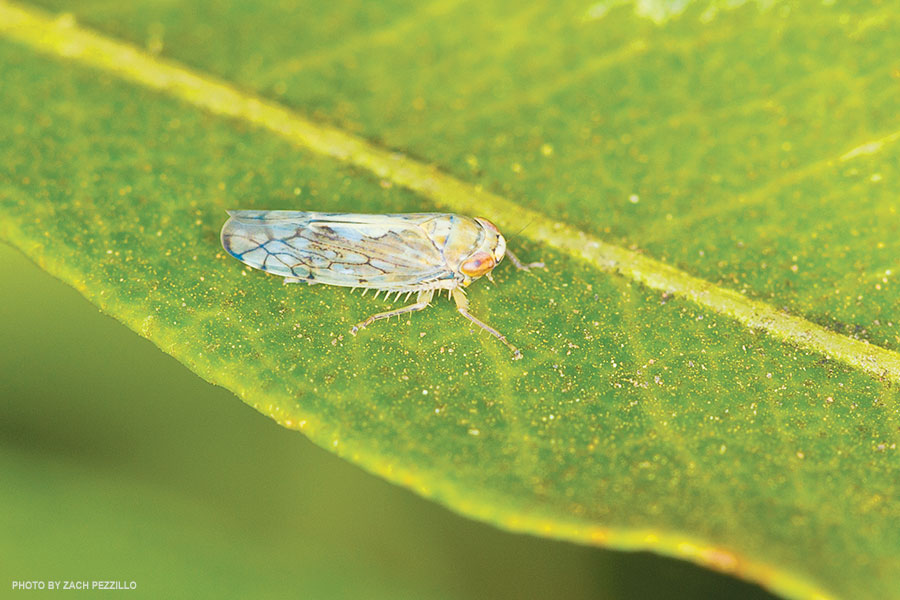 Ah, little stained-glass leafhopper (Nesophrosyne hawaiiensis), with your wide head. Doubtless you are dreaming of a safe harbor on the underside of a leaf, from which you may contemplate where to stab and drink deeply of the juice of your host plant. You are less than 1/4 inch long, and devoted to the plant whose leaves you hop. The two of you have sailed through many eons and epochs as a duo, although few can say how long ago this match was made. We do know, though, that it was made, and remains, a match made here and only here. 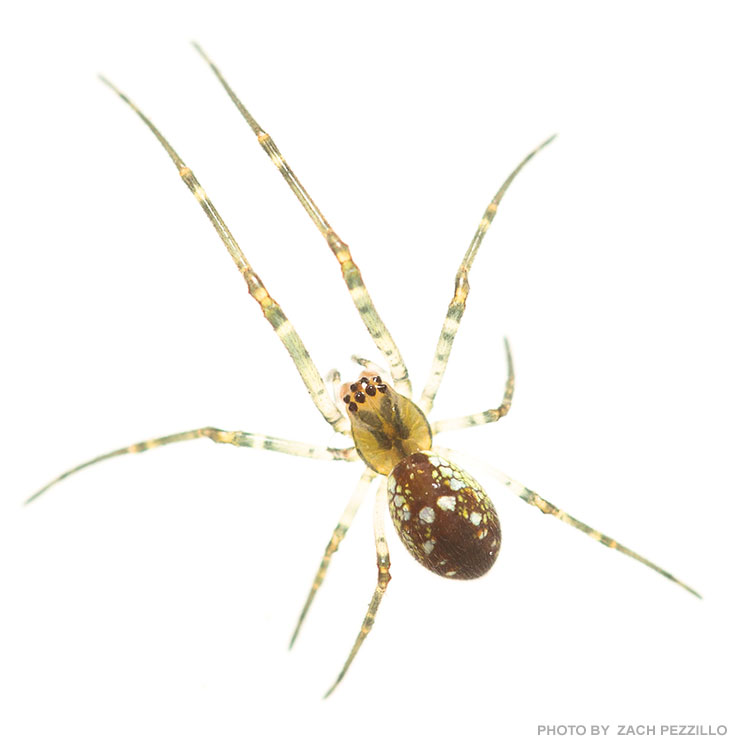 That sounds like an ancient Greek goddess, but it is the family name of this small (1/4-inch to 3/4-inch), slender spider. Lean in. See those geometric shapes patterning her back? The pattern can pulse. It can shimmy. It can ripple like silk, dimming and brightening, and no one knows why. Like the happy face spider, this beguiler does not build webs, but instead chooses to make herself long, legs reaching in front, stretching in back, so that she can fold into a leaf, innocuous until her stomach wakes. And then she stretches, shimmers, and goes in search of dinner. 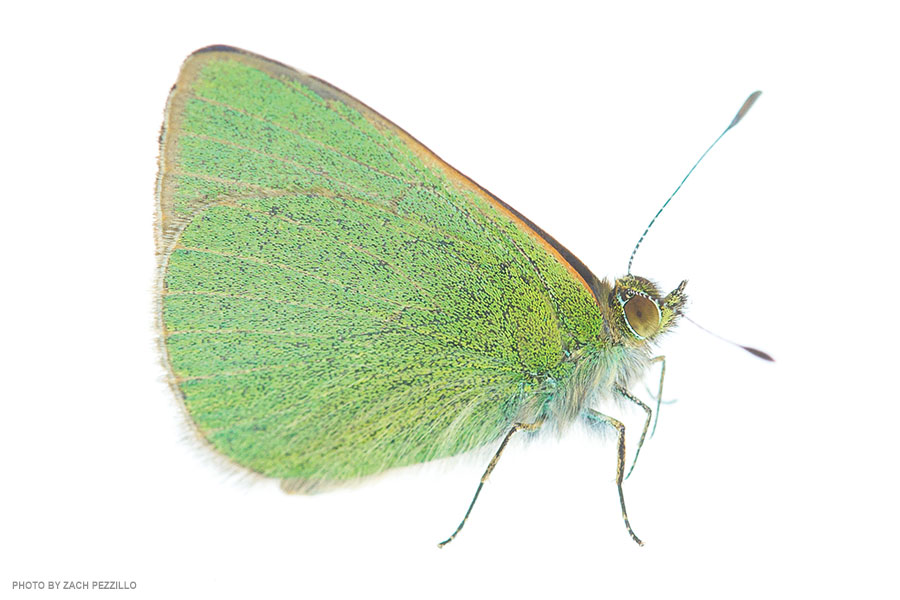 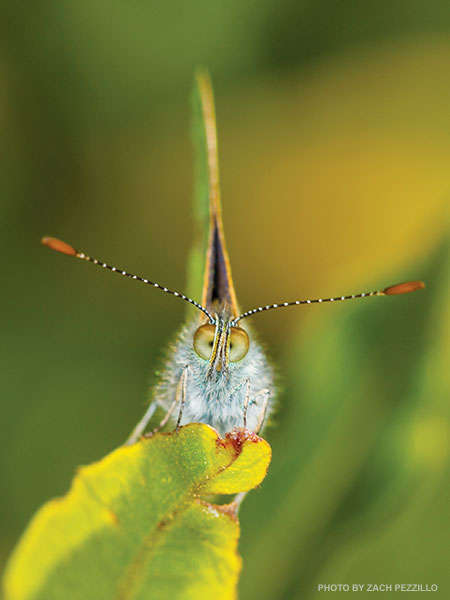 Consider the inch-long, iridescent koa butterfly, also known as Udara blackburni, or Blackburn’s Blue. Hawai‘i has produced nearly 1,000 species of moth, but only two native butterflies. This one’s affinity with tree and sky is affirmed by wings that are shimmery sky blue above and leaf green below. As a caterpillar it munches steadily through koa leaves. As an adult it trips the forest fantastic, from coastline to colder climes, alighting here on sandalwood tree blossoms, there on ‘a‘ali‘i shrub blooms — a fiery bluegreen opal on the move. 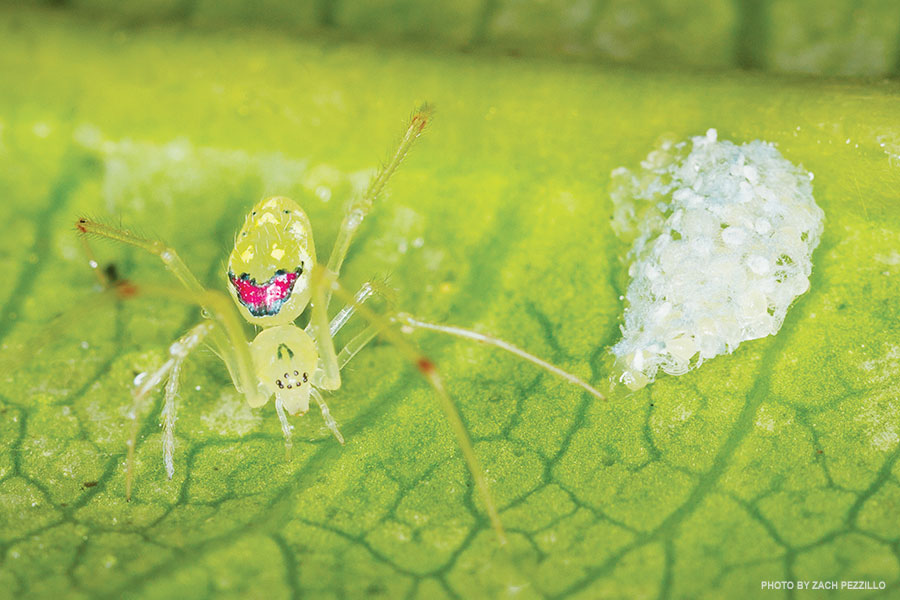 Slender of leg and sleek of body, the light-green and glassine Hawaiian happy face spider (Theridion grallator) builds no showy web, but goes about her business in the evenings among the broad and sheltering leaves of native forest trees. She is tiny, a mere five millimeters or so, but fierce in her mother love. Her light-green egg bundle is stowed for safety on the underside of a leaf, and when her children hatch she hunts for them until they can make their own way. Her Hawaiian name, for obvious reasons, is nananana makaki‘i (face-patterned spider). 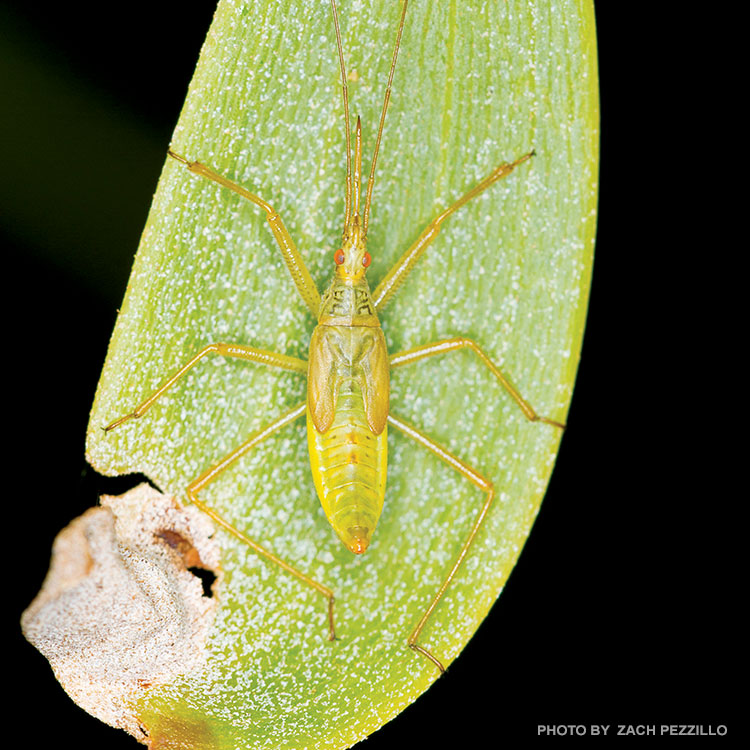 This flightless nabid (damsel bug) nymph is descended of a line of fearsome (if small) predators who elsewhere in the world whizz about, catching prey in their forelegs a la the praying mantis. And yet, in Hawai‘i and over the millennia, this tangerine-eyed beastie has done away with flight altogether. Note the wings, or what is left of them. Tiny and practically decorative, they look more like a short jacket shrugged into on a cool evening. In Hawai‘i, flightless nabids stalk the forest, long pointy rostrums at the ready to nab a meal and ingest it like a smoothie, one satisfying, sucking slurp at a time. 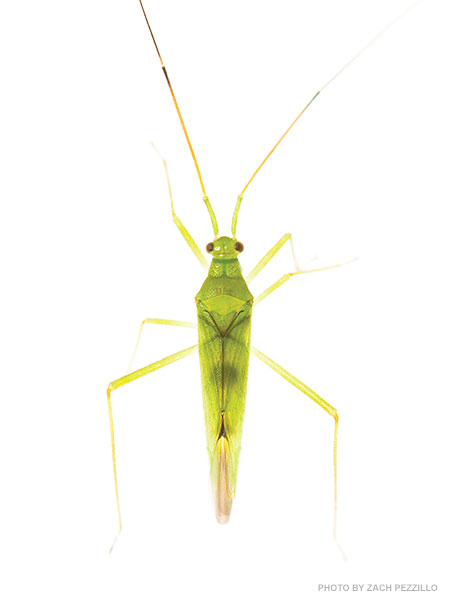 The slender mirid leaf bug (Nesiomiris obliqua) reminds you of something, doesn’t it? Summer evenings, maybe, with a lissome and lithe green form perched on a screen door, or bounding away from you on evening walks through forest and field. In Hawai‘i, this half-inch leaf bug claims many relatives, over fifty species, and all of them slightly different. Most are found on only one island, and each is hungry for a very particular native Hawaiian plant, such as the dancing ‘olapa, that tree so beloved of halau hula (hula troupes) and poets. Perhaps if every rose has its thorn, every leaf has its bug, eh? 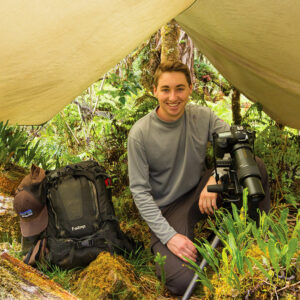 Zach Pezzillo is an unabashed enthusiast of insects and other small creatures. As a child, he frequently snuck them into his bedroom, and was once delighted when he successfully hatched several hundred praying mantises from an egg sack — his mother, not so much.

Zach’s favorite place to work is within The Nature Conservancy’s Waikamoi Preserve on the slopes of Haleakala. “Waikamoi is home to an abundance of native species,” he says, “some rare or even critically endangered. I hope that people who see my photographs come away with a heightened appreciation of nature in our own communities. I like to think that my photographs help to give native species, in particular, a voice they otherwise would not have.”