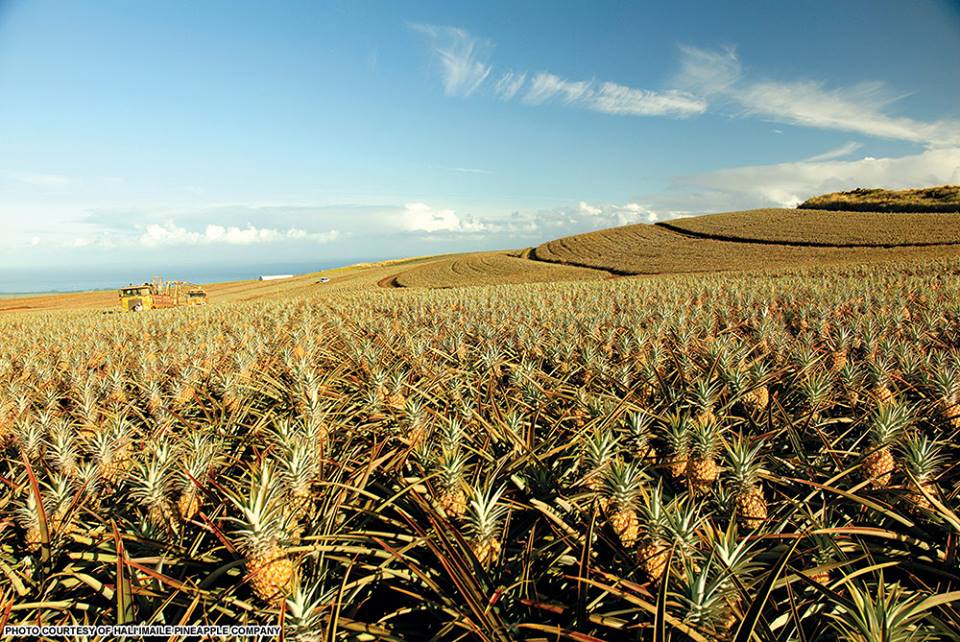 In 2007, Maui Land & Pineapple Company stunned the local community by closing its Kahului cannery after seventy-five years of operation. Two-and-a-half years later, when Maui Land & Pine shut down its fresh-fruit operations as well, we mourned the apparent demise of the island’s century-old pineapple industry.

Only a generation ago, pineapple was Hawai‘i’s second largest export crop, providing more than 80 percent of the world’s supply. For people around the globe, the golden fruit came to symbolize the Islands themselves — until foreign competition from countries with far lower production costs began dumping fruit on the market in the 1990s, and dethroned “King Pine.”

But in 2010, a small group of former Maui Land & Pine executives and managers, along with Ulupalakua Ranch owner C. Pardee Erdman, chose to defy the odds and formed the Hali‘imaile Pineapple Company. They leased more than 1,500 acres of Maui Land & Pine’s fields in upcountry Hali‘imaile, purchased equipment from the company, and retained sixty-five employees who would have otherwise lost their livelihood.

As a child in 1960s Maui, I grew up surrounded by pineapple fields, literally. My grandmother, like many local families, owned a small pineapple patch in Ha‘iku and sold the fresh fruit to one of the three canneries operating on Maui at the time. My mother and aunt both worked for Maui Land & Pine throughout their adult lives; Mom as a secretary and records coordinator, and Auntie Sachan as executive secretary to CEO J. Walter Cameron and then to his son, Colin, when the younger Cameron assumed the reins. Sometimes my mother would pick me up after school and take me back to her desk at the Hali‘imaile operations base, where I was allowed to play on the lawn fronting the office, as long as I stayed far from the driveway where the trucks rumbled in, one after the other, having deposited their cargo at the Kahului cannery.

Each December, Colin’s wife, Margaret, delivered dozens of jars of her homemade mango chutney to the office staff, and freshly baked gingerbread men for their children. To this day, the smell of gingerbread reminds me of Hali‘imaile and Mrs. Cameron’s gentle smile.

Throughout my youth, mornings began with a chilled glass of sunshine-yellow pineapple juice, and I could always count on finding a bowl of fresh-cut fruit in the refrigerator after a hard day at play. This was before the development of hybrids like Maui Gold, so the sweetness of our daily snacks varied. No matter, if the pineapple was sour, a little salt magically took away the bite. Mom would also sprinkle salt on my tongue whenever I got “itchy mouth” from eating too much fresh pine. Now, thanks to the low acid and high sugar content of Maui Gold, we no longer need the saltshaker.

Hali‘imaile Pine harvests its fruit at the peak of its juicy ripeness and delivers it to local markets within two to three days. Even mainland orders, which make up about 20 percent of Maui Gold sales, are shipped via FedEx two-day service, guaranteeing optimal freshness. That singular focus on high-quality, fresh fruit has proven a more successful strategy than Maui Land & Pine’s emphasis on canning — and serves, perhaps, as a cautionary tale for established companies whose enormous investments of time and money make them unable or unwilling to adapt to changing markets.

Touring the Hali‘imaile operations, I feel as though I’ve returned to a childhood home. The new company occupies much of the original Maui Land & Pine base yard and buildings. The office is now housed in a large garage where remnants of the past, including industrial safety warning signs and faded photographs, adorn the walls.

My guides are President & CEO Darren Strand, formerly Maui Pine’s director of field operations, and Executive Vice President Rodrigo “Rudy” Balala, who started as a teenaged field worker in the summer of 1979. During his thirty years with Maui Land & Pine, Rudy worked his way up from picking fruit and driving trucks to managing harvesting operations and then serving as director of harvesting and packing operations. Both are hardworking, hands-on managers who feel more at home in the fields than in a boardroom. They are passionate about honoring Maui’s pineapple heritage while ensuring its future through modern farming practices and sheer determination. “Pineapple ag on Maui may be on a smaller scale,” says Rudy, “but it’s an integral part of the island’s identity.”

Although Maui Land & Pine was primarily a canned-pineapple enterprise (thirty years after foreign competition began to erode Hawai‘i’s domination of the market in the 1960s, it was the last plantation in the state to continue canning), it hadn’t quite placed all of its eggs in one basket — or can. The company maintained an experimental department to work on hybrids for the fresh-fruit market, and collaborated with agricultural giants Dole and Del Monte to establish the Pineapple Research Institute at the University of Hawai‘i. In 1973, the institute’s Dr. David Williams developed a cross variety — PRI 73-50 — that was low in acid and extra sweet. It was unsuitable for canning, but perfect for eating fresh. When the institute closed in 1986, Dr. Williams went to work for Maui Land & Pine and continued to refine 73-50 and other varieties until his retirement in 1992. It wasn’t until 2005, after the canning business had ceased to thrive, that Maui Land & Pine introduced 73-50 to the market as Maui Gold.

Hali‘imaile Pine is strictly devoted to fresh fruit. And except for a display garden of nearly 100 varieties, Maui Gold is all the company grows. “We inherited the world’s premier pineapple, and it’s a healthy product,” says Strand. “We are genuinely passionate about our crop.”

Here in the subtropics, it’s pretty much impossible to grow pineapple as a commercial crop without some use of pesticides, so the company goes out of its way to implement other sustainable farming practices: composting, meticulously conserving water, and leasing 400 acres more than production requires, to allow fields to lie fallow. Harvested pineapples undergo an ozone-based water rinse certified for use on organic produce, rather than the traditional chlorine-based spray. Through an innovative approach to harvesting and packing procedures, Hali‘imaile Pine has reduced culls (rejected fruit) from 30 percent to less than 3 percent.

“The previous model was to harvest and deliver as many tons as possible from the farm to the cannery and packing shed,” says Darren “The burden that placed on quality control led to a lot of culls. Our model is different. The same people who pick the fruit on Monday will pack it on Tuesday; this alone reduced rejects by nearly 20 percent. And the few tons of fruit we leave in the field because of size or cosmetic issues are harvested the following week and used in a value-added product such as fresh-cut or frozen chunks.”

Darren credits the company’s success to its current eighty or so employees, some of whom have toiled in the pineapple industry for over thirty-five years, all of whom are willing to do tasks other than their officially designated duties. Those workers who harvest one day and pack the next help eliminate the employee downtime that specialization creates. No wonder Darren says, “Our workers are our most valuable asset.”

Watching them at work, interacting with the bosses as easily as they do with each other, I can see that the spirit of ‘ohana still prevails here at Hali‘imaile, preserved as part of the Maui pineapple legacy.

That sense of family and community extends to partnerships with other Maui businesses and organizations. Maui’s Winery at Ulupalakua Ranch produces three different pineapple wines made from the juice of fresh, hand-picked Maui Gold, and Maui Culinary Academy at UH-Maui College produces a smoky-flavored roasted Maui Gold pineapple jam, created by the students and sold to benefit the Academy’s research and development program.

Strand says there is a stronger demand for Maui Gold in the local and statewide markets than originally anticipated, so the company is working toward a slight expansion, primarily by capturing value on fruit that would normally not be harvested because of less than perfect external appearances: undersized fruit, blemished skin, etc. These new markets will include more juice production for Maui’s Winery, freshly cut and ready-to-eat pineapple, and quick-frozen chunks.

You can glimpse the history and the future of pineapple on Maui firsthand by taking the Maui Pineapple Tour through Hali‘imaile Pine’s fields and packing facility, with colorful commentary and ample sampling. Go Zip, LLC (mauipineappletour.com), offers two tours a day, seven days a week. Every guest receives a fresh, whole pineapple at the end of the tour.

Sorry, no gingerbread men or chutney.