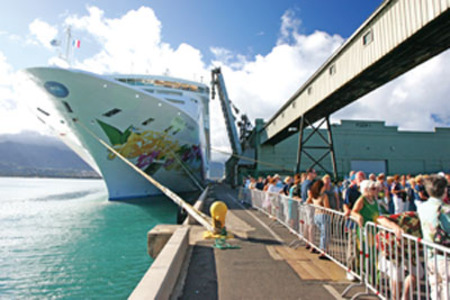 From the window of the Kahului Harbor district office, the Pride of Aloha cruise ship looks ready to plow straight through the small building. Harbor maps and aerial photos laid out on the conference table depict the ship in a more manageable size. But viewed from any angle, managing traffic at Kahului Harbor is a job for those with big vision.

Just about everything we need to live on Maui comes to us via Kahului Harbor: food, lumber, cars, fuel—everything outside of carry-on luggage. Kahului Harbor is our umbilical cord, through which essential goods reach our shores. So how are we managing this most important resource? The question hinges on the ambitions of two companies—Hawai‘i Superferry and Norwegian Cruise Lines America (NCLA)—considered assets to Maui County by some and burdens by others.

“I don’t need a 2025 plan, I need a 2006 plan,” says Steve Pfister, Kahului Harbor district manager. Shorthanded, he’s one of two people in the office today. “I have immediate needs. We’re up to the fence line.” As we talk, he looks anxiously at the ringing phone and jokes, “If you know any high schoolers who need a job. . . . ”

Aside from being Maui’s sole commercial port and a port of call for city-sized cruise ships, Kahului Harbor is a popular surf spot, the north shore’s only public boat ramp, and the home of two proud canoe teams. In the early 1900s, railroad tracks crisscrossed the harbor, delivering Maui’s primary export: sugar. Evidence of the sugar days remains in the form of long, upraised metal chutes and molasses silos.

“Everybody works together,” Pfister says. “Working together” sometimes involves delaying arrival or carrying less freight in order to utilize a shallow berth. But space is getting tighter and tighter. In 2004, the sand barge sailed 61 times; in 2005, 96 times. NCLA plans to bring a third cruise ship, its biggest yet, to Kahului by 2007. And then there’s the Superferry.

Touted as the answer to expensive interisland flights, Hawai‘i Superferry has attracted controversy from the start. On an island grappling with a population explosion, it’s no surprise that Hawai‘i Superferry’s advertised “900 people, 200 cars and 15 trucks traveling from Honolulu to Maui in three hours in cruise-ship luxury” has raised some eyebrows among environmentalists and other concerned parties. Still, just as many embrace the idea of more affordable interisland travel and look to Hawai‘i Superferry, nicknamed “H-4,” to carry Maui into the future. (The nickname is a reference to O‘ahu’s expressways: the H-1, H-2, and H-3.)

Flashy catamarans currently under construction in Alabama for the Superferry fleet will be outfitted with restaurants, high-speed internet, and plush furnishings. Service from O‘ahu to Maui and Kaua‘i is slated to begin in 2007, and to the Big Island
in 2009.

DOT Director Rod Haraga calls the Superferry a “great economic engine for the state.” Superferry’s projected customers are families, sports teams, exporters, and even the military. Maui farmers anticipate the possibility of entering the O‘ahu market. “Right now it’s basically impossible to ship produce off-island,” says Michael McCoy of Fresh Island Herbs. He pays $35 to ship just 20 pounds of herbs by air. Driving a vanload onto the Superferry will cost just $90. “It could quadruple business,” he says. “I think it could be a boon for small farmers.”

“You see who I’m for,” says Harbor District Manager Pfister, holding up his H-4 coffee mug. But later he questions the Superferry’s parking, security, and staging areas—at this point, there aren’t any. Where will passengers wait for a ride, or change baby diapers, he wonders. “I only have so many palm trees.”

State legislators, who approved $40 million in harbor improvements to accommodate Hawai‘i Superferry, have been alarmed at hearing rumors of tents and porta-potties as possible solutions for lack of infrastructure. Frustration over the lack of communication from both DOT and Hawai‘i Superferry has been high. In an October 26 article of The Maui News, State Senator Shan Tsutsui expressed anger at having learned from a newspaper story that Haraga had signed an operating agreement with Hawai‘i Superferry.

Critics point to considerable gaps in planning and infrastructure. Don Reeser, the former superintendent of Haleakala National Park, wrote a letter urging Superferry executives to address the potential transport of invasive species. Passenger vehicles and agricultural products are top vectors for invasive-species dispersal. On an island waging an all-out war against foreign pests such as miconia, coqui frogs, and banana bunchy top virus, a few muddy tires could undo years of work.

“We’re maxed out without the Superferry. We’re stepping all over each other at this point,” says Glenn Hong of Young Brothers.

Hawai‘i Superferry CEO John Garibaldi dismisses these concerns. Vehicles and baggage will be checked at time of boarding, he says, and may be subject to sniffer-dog inspection. Dirty cars will be turned away. “It’s important,” says Garibaldi, “to weigh the very real positives against the alleged negatives. We believe the Superferry will be a big positive.”

Responding to criticisms that DOT has been too cozy with Superferry development, Haraga began holding statewide public meetings in November. Resource managers such as Reeser feel that these conversations amount to one person’s word against another’s—that without a formal study, gauging the consequences of connecting the islands via “H-4” is impossible. Like others, Maui County Environmental Coordinator Rob Parsons is frustrated. “There’s been a kind of arrogance surrounding the Superferry and DOT, with them telling us what’s good for us,” he says. “A very bad precedent is being set by not insisting on an environmental assessment or impact study. Our concerns are being swept aside.”

The Maui, Kaua‘i, and Big Island county councils each passed resolutions asking for environmental review. Four Maui organizations filed suit with the U.S. District Court, hoping to force the issue. Their case was dismissed and is being appealed.

While some worry how Hawai‘i Superferry’s hundreds of passengers, trucks, and cars will affect the environment beyond the harbor, others haven’t left the pier. The Superferry is scheduled to dock at Pier 2, in the midst of Young Brothers’ operations.

“We’ve told the State we’re willing to work with them,” says Glenn Hong of Young Brothers. “But we can’t give up space without replacement acreage.” His staff works 12-hour shifts, unloading up to three ramps simultaneously, to turn cargo over in a day. “We’re maxed out without the Superferry. We’re stepping all over each other at this point.”

Meanwhile, back on Pier 1, cruise ships are multiplying. Maui’s first cruise ship arrived in the mid-‘90s. This year, Maui will entertain over 300 visits; a whopping 450,000 ship passengers will disembark in Kahului alone. When NCLA’s third ship, Pride of Hawai‘i, arrives in 2007, the company will engage half of Kahului’s deep-draft pier six days a week. Unlike Hawai‘i Superferry, these mammoth ships have slipped in without much public outcry.

The loudest opposition has come from Maui’s oldest canoe clubs, Na Kai ‘Ewalu and Hawaiian. The clubs, based at Kahului Harbor, have already sacrificed prime paddling areas to post-9/11 security measures. Na Kai ‘Ewalu coach Karen Chun feels “this latest encroachment will be intolerable.” She says the harbor’s sheltered water is “the only access for many low-income kids who live in Kahului to safe water sports, including fishing, paddling, swimming, and surfing.”

Recreational harbor users aren’t the only ones raising concerns. The community group Save Kahului Harbor claims a dedication “to long-range, sensible planning for Maui’s ocean transportation needs.” Its website looks at water and air pollution and whether the cruise industry truly meets community needs.

Mayor Alan Arakawa appointed a Cruise Ship Task Force to assess the situation in 2003. Members included representatives from the police department; Maui’s Visitors Bureau, Chamber of Commerce, and Hotel Association; and community advocates Maui Tomorrow. The task force also sought input from all sectors of the community. Their report, published last August, contains substantial social, economic, and environmental findings. (Results of the study relating to Lahaina Harbor will be discussed next issue in a story on small-boat harbors.)

NCLA was especially cooperative with the study. The world’s only US-flagged cruise-ship company is poised to assume 70 percent of Hawai‘i’s cruise business by 2007. Here to stay, NCLA has agreed to operate only within Hawaiian waters, and, unlike foreign-flagged companies, pays state and federal taxes. The company’s contracts with local businesses such as Hike Maui, Pacific Whale Foundation, and the Maui Ocean Center benefit the local economy. Whether benefits ultimately outweigh the cost of hosting cruise ships is a question the task force, after nearly two years’ investigation, was unable to answer.

For one thing, a cost/benefit analysis of the cruise industry has been complicated by legal ambiguity. Until this fall, cruise-ship companies operated under a Memorandum of Understanding (MOU), rather than laws. While the MOU covered hazardous waste, sewage discharge, and environmental emissions in detail, compliance was voluntary. If companies broke the rules they agreed to, no enforcement body existed to reprimand them. They were also self-reporting; incidents of noncompliance may not have been conveyed. How the new state laws—enforceable but less stringent than the MOU—will affect cruise operations remains to be seen.

Meanwhile, Kahului Harbor’s popularity shows no sign of waning. Yet despite the heavy flow of passenger traffic, cash flow for harbor improvements remains tight. Hawai‘i’s dockage fees are the lowest in the nation. Cruise-ship passengers pay $1.85 in dockage to visit Maui, compared with $14 at Seattle, the next-lowest-priced port. Fees go into a pooled DOT account. While Maui is the state’s most popular port of call, receiving more cruise ships than O‘ahu, the task force reports that it is unclear how much of the state revenue is spent here.

At the heart of Kahului Harbor issues is the question of industry self-regulation. Do we continue to expect companies to take responsibility for their impact on Maui’s environment, economy, and culture, or do we assume that responsibility ourselves? As precious harbor real estate is divvied up, it may be time to hit pause and determine Maui County’s priorities. As Pfister says, “If it’s a good idea today, it’ll be a good idea a few years from now.”