At today’s Hāna Kū, local fishermen arrive, armed with diving fins, a stockpile of fishing poles, spears, and a trove of knowledge that their fathers and grandfathers have passed down to them over a lifetime. Like a cast of ʻaʻama crabs clinging to the charcoal-colored cliff side, the fishermen and chefs scurry past the surging surf below until they’re out of sight. Hours later, and their bags a few pounds heavier, they return ashore and pour their haul into an oversized cooler filled with ice.

By 5 o’clock a small and eclectic group has assembled on the grounds of Ala Kukui. At one end of the property, two men transform fresh kalo (taro) into poi, each strike of the pōhaku (stone) on the wooden papa (board) creating a familiar cadence that for these residents can only mean a feast will soon commence. Kids of all sizes and ages scamper through the crowd, their laughter adding to the evening’s soundtrack. The table at the center of the outdoor lānai is a food magnet. Every few minutes, a new dish is squeezed into the spread.

Throughout the weekend, versions of this scene will replay with each meal. The Hāna families provide the ingredients—lobster and fish caught just hours earlier, wild boar from the mountains, morsels of prized ʻopihi (limpets). Others gather produce from the Ala Kukui grounds and nearby Mahele Farm. In the kitchen, chefs talk story over chopping boards and steamy pots.

With no set itinerary and no planned menu, these weekends unfold with an easy camaraderie. Impromptu dishes are inspired by the day’s bounty, and while guests scatter throughout the day, everyone faithfully appears just in time for each meal.

Chef Bancaco, who has participated in three Hāna Kū weekends, sees food as a kind of icebreaker between the chefs and Hāna families. “When you go there, you’re putting your heart on a plate to make that connection with the people of Hāna.”

The connection goes both ways: the chefs and the Hāna families learn from one another, inspired by their different skills and simply honored to be in each other’s company. 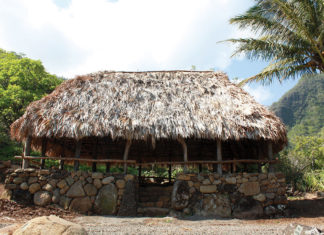 Indigenous architecture was shaped by—and helped to shape—life in early Hawai‘i. Descendants of the Islands’ first people are building on that foundation.