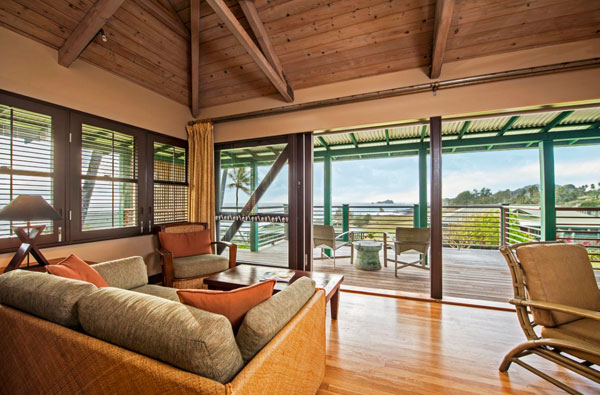 The dining room serves lunch from 11 a.m. to 2 p.m., while the Paniolo Lounge next door offers a similar menu from 2 :30 to 6 p.m. During our too-brief stay, we stop in more than once at the bar, enamored with a trio of tuna appetizers that include poisson cru-style ceviche made with coconut milk, classic shoyu-doused ahi poke, and yellowfin sliced thick and hearty as simple sashimi topped with jalepeño slivers.

After lunch we try our hand at throw-net fishing. During the first hour of the two-hour class, our Hawaiian mentor teaches us about ancient fishing techniques, then shows us the “ropes” before guiding us down to Hāna Bay, where we cast our nets into the sea. It proves easy to assess our budding prowess by the number and size of fish we gather. (We will need much practice.) It matters little that our yield was not that fruitful; we have gained perspective and insight into the challenges of life on a tropical island in days of yore.

Then it’s off to Travaasa’s spa, located in a wing of guest rooms that have been renovated into lovely but simple treatment rooms. Although many of the resort activities are gratis, some are an extra fee. I make good use of our $125 resort credit, included in the price of the weekend, and succumb to the lure of a rejuvenating facial and reflexology foot massage. (Travaasa also offers day spa packages for those not staying at the hotel.)

My companion uses his voucher to take on the rigors of a horseback ride, followed by an island brew hop, otherwise known as beer tasting at the Paniolo Lounge. I join him later to compare notes. Spa program manager Monique Jutila stops by. “How were the treatments?” she asks.

“That was the best massage I’ve ever had,” I tell her, reaching for a cucumber-ginger concoction the barkeep has slipped in front of me.

“And the horseback ride?” Monique asks my friend.

“The views were spectacular. Hāna was made for exploring on horseback,” he concludes. “Did you know it wasn’t until the 1940s that the road to Hāna was anything more than a horse trail?” he relates, having gleaned the information during his ride.