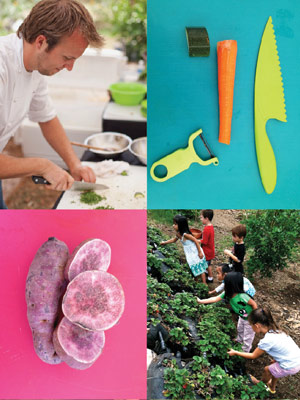 Jubilant second graders file into the Kihei Elementary School garden, taking their places at cutting boards set up beneath a shade tent. They beam at Chef Brian Etheredge, owner of award-winning Capische? restaurant just down the road, who passes out green onions, basil, and parsley. The gourmets-in-training rub the fragrant herbs between their fingers, cut them into tiny pieces with scissors, and toss them into a giant bowl. The students are celebrating last week’s sweet potato harvest by making sweet potato salad and gnocchi. To guide them, a few of Maui’s finest chefs have volunteered their time and know-how.

A labor of love, Kihei Elementary School’s garden would not exist without such volunteers. Four years ago, when Alana Kaopuiki started teaching second-grade science, she looked around the school campus in vain for something green. “I couldn’t believe there wasn’t anywhere for children to see the life cycles,” she says. She reached out to South Maui Sustainability, an organization that, among other things, fosters community gardens. Volunteers showed up with shovels and helped Kaopuiki’s class build three raised beds.

“It was such a success, all of the other teachers wanted a garden,” says Nio Kindla, whose tanned face hints at how many hours he spends out here with the kids. Kindla and the other volunteers realized that they’d planted an important seed at Kihei Elementary. They formed the South Maui School Gardens Project, and with a small grant from the County of Maui, bought plant starts and supplies. The school principal designated a quarter acre in the center of the schoolyard for the garden. The next fall, the project ballooned from one class to twenty-six — more than six hundred students.

The volunteers couldn’t keep up with demand. For help, they turned to an unlikely but perfectly suited source: the food-and-beverage industry. Kindla is the headwaiter for Private Maui Chef, an exclusive catering company. Back in 2008, he invited his boss, Dan Fiske, to see why he sometimes shows up for shifts with dirt-scuffed elbows. The ploy worked.

“Once you go to the garden,” says Fiske, “It’s impossible not to want to help.” Fiske, a passionate locavore and lifelong farmer himself, donated both his money and time to the school garden. Then he mustered his colleagues — the top knives in South Maui — to join him. Now, on any given school day, you might find Fiske, Brian Etheredge and Chris Kulis of Capische?, or Cameron Lewark of Spago tossing salad greens with enraptured grade-schoolers. 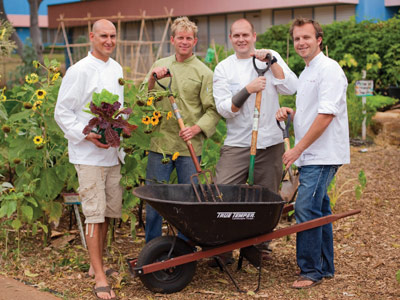 The chefs shoulder the program in meaningful ways: they teach cooking classes on-site, host benefit dinners at their restaurants, and offer their employees incentives to volunteer. For the past four years, Fiske and Etheredge have funded a part-time salary for garden coordinator Kirk Surrey. It’s Surrey’s job to schedule the nearly nine hundred students and parents who now frequent the garden.

Etheredge signed on after hearing about a second grader who brought his teacher a gift of bananas, but didn’t know what the fruits were or how to eat them. “That sealed the deal for me,” says Etheredge. “Kids know what Fritos or Fruit Loops are, but when you take them to the vegetable aisle, they can’t name anything. Being a chef and studying nutrition, I know what food does or, more importantly, doesn’t do. Little bodies need so much to grow. If they don’t get it, they grow crooked.” 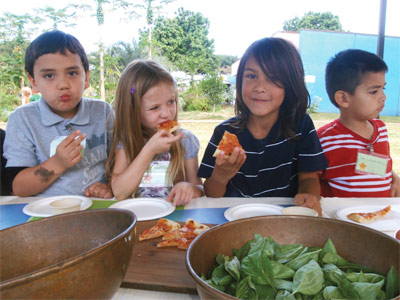 That a seven-year-old didn’t recognize the nation’s most popular fruit — one that grows in his own backyard — shows how far we’ve strayed from our roots. As a society, we have become food illiterate. So this year, the Kihei school garden’s focus is food familiarity. The students are learning a new language of seeds, sprouts, and leaves, one that evolves into fantastic flavors. A hand-painted sign at the garden’s entry helps students connect plants with foods they eat, pointing the way to pizza, salsa, stir fry, and green smoothies.

“Our first year we did a taste test,” says Kindla. “We had kids that had never had a green bean — not even in school lunch.”

“Now kids can identify rattlesnakes,” pipes in Surrey. A “rattlesnake” is a type of green bean — a purple-speckled heirloom variety. The creative keiki gardeners have shaped the rattlesnake vines into a tunnel. There’s also a Hawaiian taro patch and a spot for the Three Sisters — the vegetable trio of corn, squash, and beans that Native Americans shared with the pilgrims. It’s a prime setting for both history and science lessons.

“We teach kids how plants work together,” says Surrey, explaining that cornstalks serve as a trellis for the beans, the beans restore nitrogen that corn sucks from the soil, and the squash’s prickly leaves keep pests away from all three. When bushy plants bolt (that’s gardenspeak for go to seed), the students learn to collect what they need for future crops.

Kihei Elementary isn’t Maui’s only public-school garden — it wasn’t even the first — but it’s the most substantial and sustainable. The project itself keeps expanding; the tireless volunteers migrated next door to Lokelani Intermediate School, where they plan to build a terraced garden in the campus amphitheater — complete with a flower orchard for lei making. They recently changed their name to Grow Some Good, which better reflects their far-reaching goals.

“People assume that because Maui is a rural community, kids know about farming and cultural practices, but they don’t,” says Surrey. “A lot of kids’ parents work two or three jobs.” And those jobs barely put food on the table. Kaopuiki estimates that 60 percent of her students receive free or reduced school lunches — signifying that their families hover near the federal poverty line. Kindla and Surrey were thrilled to hear that kids were asking for kale in their smoothies at home, but parents weren’t as excited.

“The feedback we kept getting from parents was, ‘We can’t afford fruits and vegetables,’” says Surrey. “So we’re bridging the gap between what’s happening here at the garden and what’s happening at home.”

Once a month, Grow Some Good hosts “Plant It” events with the YMCA. They give away surplus vegetables and starts for home gardens, and teach parents to cook the recipes their kids created.

Under the sweltering South Maui sun, the Kihei Elementary School garden is a fertile oasis of flowers, roots, vines, hay bales, and butterflies. The temperature feels at least two degrees cooler within its boundary. Shiny purple eggplants and Roma tomatoes dangle above strawberries ripe for the picking. But the sweetest harvest is the kids’ blossoming connection to what they eat, where it comes from, and how it makes them feel.

Beneath the tent, three second graders shovel the last forkfuls of purple sweet potato gnocchi into their mouths, recounting what they liked best about the dish. “It’s a mix of different colors,” says one girl. “It’s really healthy,” says another. “I like the fresh tomato,” says a third.