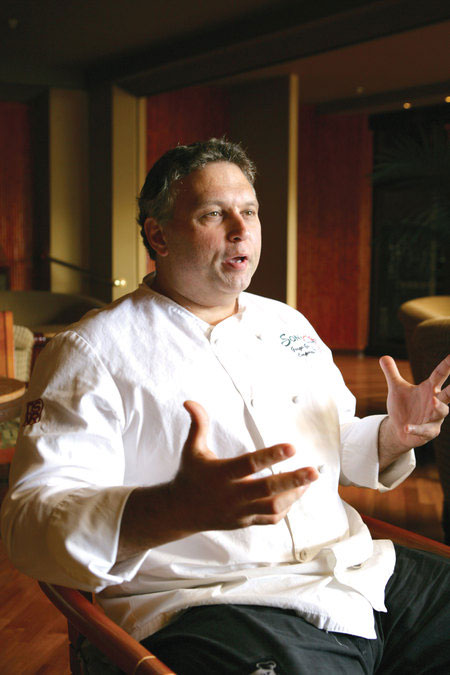 Great meals are handcrafted works of art, dependent on the artisans who create and deliver them to the table. We all know that the guest comes first at fine restaurants; but when the kitchen is happy, the food tastes better. Recently I peeked into the “back of the house” of three 2007 ‘Aipono Award winners to see how Maui’s top restaurants cultivate the kind of talent that keeps us coming back for more.

Pushing through the swinging doors into the bright kitchen of Son’z, 2007 Best New Restaurant, Chef George Gomes clues me in. “It’s not the back of the house,” he says. “It’s the heart.”

“I’ve been here for 27 years,” says Gomes. The corporate chef for Tri-Star Restaurant Group also oversees Sarento’s, Nick’s Fishmarket, and Aaron’s atop Ala Moana on O‘ahu. “I’m never going to quit. I love it. It’s in my soul.

“As a chef, I’m also referee, marriage counselor, doctor, psychiatrist,” he laughs. “You have to solve problems, but at the end of the day it’s about the food. Five o’clock, the curtain comes up.”

Passion is a chef’s double-edged knife; just enough is needed to keep the creativity sharp. Aside from proficiency in the five mother sauces, it’s what Gomes looks for when hiring—and found in Geno Sarmeinto, Son’z executive chef. Sarmeinto began cooking at age 18, following his brother into culinary classes at Leeward Community College on O‘ahu. “He said it was easy,” laughs Sarmeinto. “It wasn’t easy. It’s mathematics, it’s science. Chef George really pressed my buttons. He pulled me in. Now I’m hooked.”

Gomes says of his protégé, “Anybody can throw a butter sauce on fish. Cooking to me is braising, or doing a terrine—making something from nothing. I think Geno had that creativity from the start. He’s one of the greatest chefs in the company.”

Now at the helm of Son’z, Sarmeinto is tasked with pressing buttons himself. “We have a young and hungry crew, all willing to learn,” says Sarmeinto. “It’s good because we can mold them, challenge them. We bring in a new product, like foie gras, so there’s always something to learn. If they’ve never seen it before, their eyes light up.”

Relief cook Brandie Voisine exemplifies the benefits of sparking an employee’s hidden interest. She runs the line at Son’z two nights a week, on Sarmeinto’s days off. The rest of the week she’s free to experiment in the cooler end of the kitchen—her first foray into pastry cooking. Mixing bowl in arm, she whips up tonight’s special: a batch of caramel chocolate tarts. “I absolutely love it,” she says. “I look at books and come up with my own twists.” Indeed, the pastries—entwined in savory dishes such as escargot delectably ensconced in profiteroles and ‘ahi prime rib served with fluffy popovers—are among the best items on the Son’z menu.

Ask Richard Olson III about his job at David Paul’s Lahaina Grill, 2007 Restaurant of the Year, and he just beams. The resident sommelier loves sniffing out rare vintages to bring out the beauty of Chef Arnie Gonzalez’s cooking. He glows when describing how his current favorite, a Gigondas grenache-syrah blend, flirts with the flavors in the coffee-roasted lamb. But passion alone wouldn’t have got Olson where he is today; this newly credentialed student of the grape needed others’ investment.

“Your employees are your business, they do such an amazing job,” says Munch. “[They are] a very valuable asset that needs to be protected and nurtured. So we try to get creative and keep sweetening the benefits.”

Sweet benefits indeed; Olson’s include research and buying trips to far-flung wine regions. Next stop: New Zealand, where he’ll hobnob with winemakers so he can bring back treasures that we can all enjoy.

He’s not the only one earning miles on the company, either. When popular bartender Mary Swiger relocated to Michigan, “We stayed in touch,” says Munch. For the savvy restaurateur, this meant flying Swiger back to Maui during busy holiday seasons, to appease guests inquiring after their favorite mixologist. When Swiger decided to return to Maui for good, Munch assisted. “She had to sign a 20-year agreement, which was hidden in the fine print,” he jokes.

Munch complements employee vacation allowances and 401k plans with personal touches. Leo Carbajal, a chef of 14 years and an avid weightlifter, got a boost with competition entry fees. “We helped him out with quite a few events—nationally and locally,” says Munch. “We were proud to be a part of that.”

Future employees are taken under wing as well: Each year an aspiring chef is awarded a scholarship to attend Maui Community College’s Culinary Academy. “If we can continue to foster the local talent, which there is so much of,” says Munch, “we all benefit.” Judging by the accolades David Paul’s has collected over the years, it’s a winning philosophy.

“We don’t do a lot of advertising,” says John Thomas, a longtime waiter at Joe’s. “We don’t need to.

Everybody comes here—from Alice Cooper to Kiss to the governor of California and his wife.” Even during the off-season, weekday evening, the dining room quickly fills. Guests glance at the golden records hanging by the door and greet the bartender by name. “Hey, Z!” Mark Zimmerman, a.k.a. “Z,” reaches across the bar to shake hands.

“It’s a pretty unusual situation that we have,” observes waiter Tony Grindel, who, like Thomas, has worked here for 11 years. “We’re like family. Guests feel at ease right away,” he says. Chef Tom Newcomer’s cooking feels like home too. What better comfort food is there than a hefty slab of prime rib atop buttery garlic mashed potatoes? Before I can order, a guest at the bar pipes in. “Try the pumpkin-crusted mahi,” she says. “My family just goes nuts for that sauce.”

Waiters chat with familiar guests, buzzing between tables without breaking a sweat in their crisp, white shirts and khakis. “The service overlaps,” says Grindel. “That way people aren’t taking on too much work. We share our tips evenly. We may not have as many $300 nights because we’re sharing, but we don’t have $80 nights, either.”

The restaurant’s eight waiters average 10 years’ employment apiece—uncommon in Maui’s transient food-and-beverage industry. “They’ve seen guests’ kids grow up,” says restaurant Manager Sharon Jahns. “When someone tries moving to the Mainland,” she jokes, “they always come back. Bev [Gannon] says it’s like Hotel California—you can check out, but you can never leave.”

Staff satisfaction may not be a trade secret after all. But the simple mix of creative passion, solid investment, and old-fashioned teamwork can be hard to perfect. As far as Maui No Ka‘Oi readers are concerned, these three winners have it nailed.