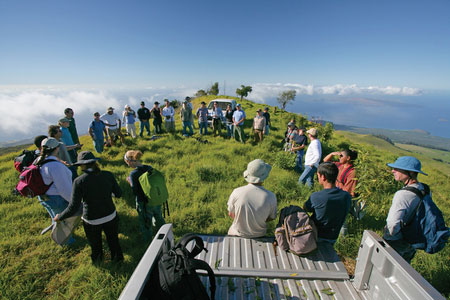 Before heading to breakfast, I spend a moment watching dark, grey dolphins leap and dive in the clear blue water. Empty, golden Honokanaia Beach stretches out invitingly beneath Kaho‘olawe’s Navy camp, my home for the week. I grab my pack from my bunk, feeling like a superhero—at the very least, a tough-but-sexy character in a James Bond flick—and join the others scarfing down fish and rice in the mess hall. Wow. A private dolphin show and fresh mahi for breakfast? I can hardly believe my luck. Just how did I earn this all-expenses-paid trip to a remote and restricted Hawaiian Island? I simply offered to help.

As a volunteer with the Kaho‘olawe Island Restoration Commission, I spent a week replanting the native grasses and shrubs that had been obliterated by decades of feral goat grazing and military bombing. Under the blazing midday sun, I yanked stubborn kiawe roots out with the help of an equally stubborn contraption called a “weed wrench.” It was work without a doubt, but the experience remains one of my best vacations. Before the sun set each day, we hit the surf and frolicked on an otherwise uninhabited beach. Now whenever I look at quiet Kaho‘olawe on the horizon, I hear the echoes of ‘ukulele music played by fellow volunteers late into the starry night. I ponder the future of the seedlings I carefully placed into the battle-scarred red earth. I feel honored to have given something of myself to the island.

The desire to “give back” is a driving force behind the new movement called “voluntourism.” It’s a novel term for an old concept, somewhat awkwardly defined as “the practice of taking a holiday which combines leisure and sightseeing with the opportunity to work for a charity or other worthwhile cause” by Macmillan Dictionary. Basically, it’s what Mom told you to do when visiting a friend’s house—lend a hand with the dishes after dinner. Help out where you can.

National interest in voluntourism spiked after Hurricane Katrina and the 2004 tsunami. In the wake of these disasters, vacationers wanted more than to sip mai tais in Club Med; they wanted to help rebuild their favorite vacation spots and, in doing so, become a part of them.

Helping out is a relatively easy sell in Hawai‘i, where most of the work sites are drop-dead gorgeous and the undertaking itself is cushioned  by good company and awesome recreational activities when all is pau (finished). Another major benefit: workers are privy to remote spots that most tourists will never see, such as Kaho‘olawe or Pu‘u Kukui. By grabbing a pair of gloves and piling into the work truck, you’re granted admission to some of Hawai‘i’s most heart-stopping landscapes.

Pu‘u Makua, on the leeward slope of Haleakala, is one such landscape. After a bone-rattling 4WD ride up to the5,000-foot-elevation work site, we volunteers spill out of the truck and drink in the majestic coastline view stretching from Kanaio to Kanaha. A gentle mist weaves between the silhouettes of native ‘ohi‘a, koa, and ‘iliahi (sandalwood) trees—stunning remnants of a once-great, native dryland forest. For the past 20 years, landowner ‘Ulupalakua Ranch has supported a reforestation project here, generously donating land access to research biologist Art Medeiros and his team—a dedicated bunch of locals and visitors willing to trade a few hours’ labor for a trip somewhere beautiful.

Before entering the work area, we circle up on the bluff. One of the regulars chants an oli (prayer) asking for permission to enter and for blessing on the work about to be done. Medeiros describes the history of the reforestation project, and the outstanding natural resources the volunteer crew is helping to revive: a living museum of more than 50 rare, native tree species used by Hawaiians in the past to build canoes, make medicines, scent and dye kapa (barkcloth), and perform religious ceremonies. “Without our efforts,” says Medeiros, “all of these trees, their uses, their associated animals will all perish forever.”

Armed with that knowledge, we sling on backpacks and carry buckets loaded with a forest’s worth of seedlings. Some workers plunge holes in the ground with an o‘o (a spearlike digging tool). Others slide koa and ‘a‘ali‘i seedlings from tubes into the ready earth, troweling the fragile roots with soil and skirting the little plants with surrounding scrub for protection. When lunchtime rolls around, few picnic spots are as fine as the soft ground beneath one of the older koa trees, surrounded by tired but gleeful new friends.

“I thought it was great to meet other people,” says Leonie Fischer, who ventured up to Pu‘u Makua while visiting from Germany. “Besides planting and talking about ‘scientific’ stuff, it was just a lot of fun.”

The fun lasts all week with the Sierra Club’s Hawai‘i Service Trip Program (HSTP). The O‘ahu-based agency hosts seven-day forays to several islands, including weed-pulling adventures on Lana‘i and trail-building in Kalaupapa on Moloka‘i. This March, the group is repairing fences at Pu‘u Wa‘awa‘a on the Big Island.

Fence repair is grueling work, to be sure, but volunteers have the satisfaction of knowing that they’ve safeguarded the tender shoots of native plants from roving herds of wild deer and goats—an effort that will benefit the forest long after the crew has gone home. After a grunt-filled day of drilling pole holes and twisting wires into place, volunteers can explore the nearby forest-bird sanctuary. If they’re lucky (and how could they not be, after racking up all that good karma?), they may glimpse the rare ‘akepa, a plucky orange-yellow honeycreeper whose survival depends on the preservation of old-growth forests. HSTP trips are a bargain at $200 ($150 for students), which covers air transportation to outer islands, food, and housing. (Ansel Adams-like photo ops are complimentary, as are the night sky’s natural fireworks).

By no means does the forest have the corner market on voluntourism; there’s plenty of work (read that as fun) to be found makai (seaward). At Ko‘ie‘ie Loko I‘a, a traditional Hawaiian fishpond in Kihei, lava rocks need stacking. In ancient times, Hawaiians passed rocks hand-to-hand for miles, from the base of Haleakala to the shore, where they were used to build a highly efficient fishpond. Ke‘eaumoku Kapu and Na Koa Kau I Ka Meheu O Na Kupuna, “the warriors who walk in the path of their ancestors,” carry on the work of their elders with the help of volunteers.

After learning about the site’s royal history—it provided fattened ‘anae (mullet) and ‘awa (milkfish) for several kings, and was a second home for a mo‘o (lizard goddess)—we wade knee-deep in the water. We heave fallen rocks from the sand and stack them for the builders to expertly fit back into the fishpond’s walls. I turn my nose when offered gloves until I hear rumors of fireworms. (A sort of “centipede of the sea” inhabits the fishpond. Perhaps the mo‘o in disguise?) A few older visitors gather and sort limu (seaweed). Invasive limu is left on the sand to dry out, while native limu species are anchored to pieces of coral and planted back in the water.

While most of these “voluntour” adventures require a degree of physical fitness, many do not. A quick inquiry to any of the aforementioned organizations will result in an onslaught of options: folding newsletters, labeling gear, even painting murals. You can pitch in for a day or a week, depending on your interest, time or stamina. Large groups can head to the Hawai‘i Nature Center in ‘Iao Valley, where up to 54 guests can stay in the recently renovated nine-room lodge—a mountain refuge open only to volunteers. Given the outstanding breadth of voluntour activities, there’s really no excuse not to get involved while on vacation.

“I still remember this time as one of the best in my life,” says Fischer, about a longer voluntourism stint at Hawai‘i Volcanoes National Park. “I learned so much—not only about the environment, but also about personal things. The work in teams and out in nature gives you a wonderful perspective on life, and on what really matters.”

As a voluntourist, you’ll likely be asked to do things you wouldn’t ordinarily do—lug fence posts across lava rock, spend a night camping with strangers, or tie seaweed to coral. As a result you, too, might experience moments of feeling like a superhero, having given back to a place you love. All that, and you’ll still go home with a hot tan to brag about.

Volutourism: How You Can Get Involved

Overnighters:
Pack like you’re going camping, even if cabins are provided. Be sure to inquire with the selected organization for specifics about what to bring.