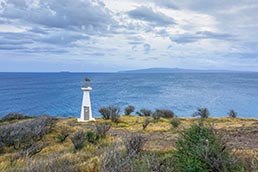 “It’s about getting outdoors and finding places you might not know about,” explains David Hayashida, who goes by the handle Mauison. Hayashida has logged more than 2,500 geocache finds in forty-nine states, most of which he found while living in California. He has also planted a handful of his own throughout the Valley Isle.

“When I first started geocaching on Maui, I was amazed by the ones that took me to places I never knew existed — and at that point I had lived on Maui for over twenty-five years,” says David.

Sometimes a hunt reveals surprises within familiar places — like our second geocache mission, dubbed “Haleakala Hubcap” on the website, hidden just off Haleakala Highway. Brad and I motor a few miles up the serpentine pavement until the GPS tells us we’re close, then take a short walk before uncovering something that resembles a car wreck.

We dive under a pile of abandoned hubcaps, and find a plastic bin wrapped inside two layers of heavy-duty trash bags. Inside, trinkets form a time capsule revealing hints of those before us: foreign currency, a BanBury Golf Club pin, a military figurine. . . . I sign the logbook, and trade a pin of the Canadian flag for another luggage tag.

“With the majority of geocaches, you won’t find anything of great value,” confirms David. “So it’s less about the treasure and more about the hunt.”

He’s right, and as we set the geocache back in its hiding place, I’m already imagining our next pursuit.

“I think we’re ready to step it up,” I tell Brad, confirming his opinion that my story research has evolved into a new obsession. He nods and presses his lips together as if to say, “I knew this would happen.”

Pam Scott is a geocaching veteran who goes by the handle Unimogger and has logged more than 1,850 finds. Earlier in the week she emailed several geocaching suggestions, including one called “Viking Rock.” “This is my absolute favorite, but it’s tricky,” she wrote.

Her words bounce off the screen as if to taunt me. If this is some sort of cryptic dare, I can’t back down now. Brad and I follow the coordinates to McGregor Point near Ma‘alaea, a popular fishing perch and home to a defunct lighthouse. Thousands of cars speed past this oceanside hideaway every day, yet most drivers remain unaware of the scenic wonders just beyond the blacktop.