Above, video: Fisherman Ryan Koshi reeling in a mahimahi

It’s 5:30 a.m., the moon is a sliver, and a cool wind is blowing at fifteen knots. We are standing in the thirty-eight-foot Radon Naomi K. as Layne Nakagawa starts up the diesel engines, sending shivers through the boat. My stomach flutters with excitement. Catching fish is one of the purposes for today’s excursion; the other is to change the satellite beacon on a fish aggregation device. Known as FADs, these structures float on the surface, attached by anchors to the ocean floor, creating habitat where small fish tend to congregate — attracting the larger fish that eat them.

“FADs don’t necessarily make fishing easier,” says Eric Kingma, “but they make it more efficient, by reducing search time and trolling costs.” Kingma coordinates the National Environmental Policy Act for the Western Pacific Fishery Management Council (WESTPAC), established by Congress to promote environmentally responsible fishing. In 2011, WESTPAC placed a couple of FADs in the waters off Kahului. One of them is where we’re heading.

Nakagawa reverses the boat into Kahului Harbor and shouts over the engine. “Floyd and Doris are so committed to sustainable fishing. When they asked me to show you the fish aggregation setup, I told them, ‘No problem.’”

Floyd and Doris Christenson opened Mama’s Fish House on Maui’s north shore in 1973. Today daughter Karen manages the South Seas-themed restaurant that put the little community of Ku‘au on the national map. Mama’s has long been a proponent of local agriculture and sustainable fishing. That support also runs deep.

In 2013, WESTPAC’s FADs detached from their anchors, and Kingma says local fishermen felt the impact of their loss. Mama’s Fish House offered to help, and a public/private partnership was born. “We maintain the permits,” says Kingma, “but Mama’s paid for assembly and deployment of the FADs. When they were redeployed, we named them for Mama’s: MFH1 and MFH2.”

A third-generation fisherman, Nakagawa is also a FAD installation coordinator for WESTPAC; he designed and helped build both of Maui’s FADs. “The one we’re going to, MFH1, [is] anchored at 7,200 feet — almost a mile and a half deep, and twenty-five nautical miles offshore. The other FAD is forty miles out, anchored at 20,000 feet.” That’s twice the height of Haleakala.

An hour passes as the boat cuts through pounding black waves. Slowly, the sky begins to brighten as the sun rises through the clouds. I feel like Hemingway’s seafaring old man; there is a freedom that comes from being set loose on the ocean.

Ricky Pojas, Naomi K.’s cocaptain, sights ‘iwa (frigate birds) diving into the ocean; there are fish ahoy, 200 yards away. As Pojas takes the controls, Nakagawa and fishing partner Ryan Koshi don rubber boots and overalls. Hooks baited with live ‘opelu (Pacific mackerel scad) barely touch the surface when, boom! Fish on! Another line goes in and a wild dance begins as Nakagawa and Koshi reel and lift fish onto the deck.

Twenty minutes and 100 pounds of fish later, we move on to MFH1. Light flashes below the surface: hundreds of fish encircling the FAD. Nakagawa yells, “Brah, the mahi stay swimming around the buoy like koi! Almost can gaff ‘em!” The frenetic dance resumes as Koshi and Nakagawa bait, hook and reel in mahimahi, tossing smaller fish back.

After nearly an hour, Nakagawa calls for Koshi to stop baiting and has Pojas pull up to the buoy for the next task: replacing the beacon.

I had asked Eric Kingma whether FADs encourage overfishing. “Our pelagic species are fairly healthy,” he said, adding that, while globally there’s concern over numbers of striped marlin and yellowfin tuna, “here in the northern subtropics, we’re fishing from large populations. We’re not overharvesting. That said, we still have voluntary data collection through Mama’s and WESTPAC.”

Kingma encourages consumers to “Buy local. We know our fish populations, we know how much we’re taking, and where our fish go. Our fishermen are fishing in an environmentally friendly manner” — which may not be true for imported fish.

Maui’s fishermen know the numbers and species caught, says Nakagawa, because they log their catches daily. “We also log the weight of the fishes at Mama’s,” he says. “And I do a catch, tag and release so we can follow the different species’ age and growth rates. At one point we overfished onaga and ‘opakapaka and had to stop. After a two-year ban, we are able to fish again because the population is up. The research is ongoing. It’s so important in keeping our fisheries healthy and sustainable.”

As we approach the tiny flotation device, it’s obvious to me that this could be dangerous. Earlier, Nakagawa shared a story about a near-unsuccessful jump onto the MFH2 buoy while white-tip sharks circled the slippery, seaweed- and guano-encrusted FAD. Now, as he lowers himself over the rail of the boat with a beacon replacement in hand, I feel my heart racing, until he grabs the pole secured in the middle of the FAD. The ocean is churning as Koshi throws supplies to him: cutters, wrenches, pliers . . . amazingly, nothing falls into the depths.

Twenty minutes later, Nakagawa waves for us to retrieve him. As boat and buoy toss in the waves, he leaps and grabs for the railing. Koshi leans forward to grab his arm, holding on for dear life. Sighs of relief and laughter fill the cabin as Nakagawa steadies himself against the rail.

It’s 2:30 p.m. as we pull back into Kahului Harbor, where the crew will spray down the boat and fishing gear, and transfer a hold full of mahimahi into ice-filled, insulated boxes for early-morning delivery.

Nakagawa arrives at Mama’s Fish House at dawn. The delivery dock bustles as fishermen drop off their catch. Mike Pascher, Mama’s chef de poisson, grabs his clipboard and logs the weight and types of fish, data he will later send to WESTPAC. Pascher is in charge of the temperature-controlled room where whole fish is stored and cut into serving-sized portions that will star in Mama’s award-winning recipes, such as panang curry; kale- or macadamia-nut-crusted; or onaga with papaya-lychee black-bean sauce. 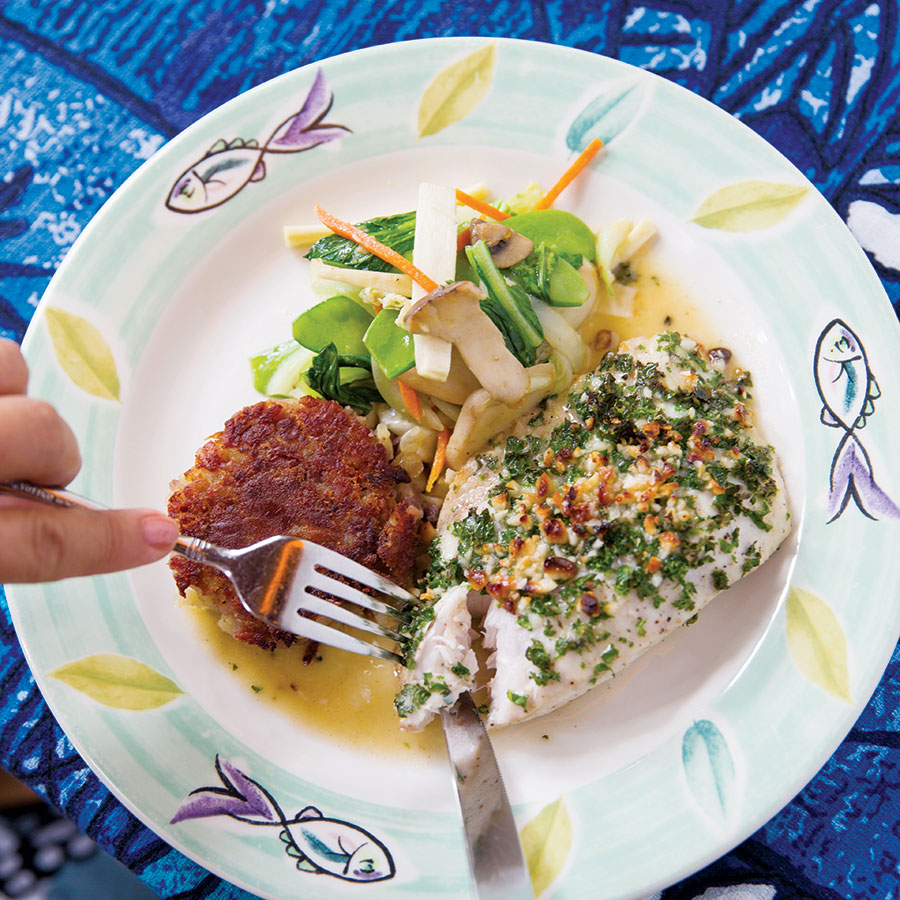 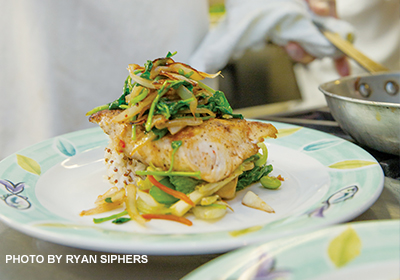 We head into Mama’s kitchen, where Executive Chef Perry Bateman is creating a dish just for us: mahimahi wrapped and baked in ti leaves. While he’s kind enough to share the recipe, he’s a fan of experimentation. For example, he says, this technique also works with other types of fish. “The richer the fish, the less butter or oil you have to add. The leaner the fish, the more butter or oil you may want — but the more you use, the more citrus juice you will want to add to balance the flavor and richness.

“Experiment with your favorite vegetables, herbs, and other ingredients, such as mushrooms, cooked artichoke hearts, capers, olives, basil or fermented black beans. Shrimp, chorizo or Chinese sausage can amp it up even more,” he says. “You get the drift. Be creative and have fun.”

For Chef Bateman, Mama’s support of sustainable fishing follows a tradition as old as the Islands’ pre-Contact past. “Like the ancient fishponds in Hawai‘i, the fish aggregation devices are a part of our fishing culture now. With proper management, they are a guarantee that there will be plenty of fish for future generations.”

And if we’re lucky, plenty to enjoy prepared a la Mama’s Fish House.