After a day at the beach, there is no finer reward for salty lips than a heaping dome of finely shaved ice doused in a rainbow of tangy, sweet syrup. Shave ice—or ice shave, as it’s called on the Big Island—has near-religious importance here in Hawai‘i. On Maui, devotees are flocking to a sweet new shrine: Ululani’s Hawaiian Shave Ice, where heavenly bliss comes in a plastic cup.

The icy dessert arrived in the Islands along with Japanese plantation workers in the late 1800s. Over the years it evolved into a local specialty all its own: Ice cream was added to the sweet adzuki beans at the bottom of the cup. Modern flavors like bubblegum and root beer joined the traditional watermelon and strawberry. As any sidewalk shave-ice expert will tell you, the Hawaiian treat is no mainland snow cone or slushie. Snow-cone ice is chunky and gravelly. Shave ice is feathery and light. And don’t dare call it “shaved” ice.

Several famous shops on O‘ahu have been serving shave ice for decades—one is celebrating sixty years—but I’m willing to risk heresy and claim that the Maui newcomer might just offer the best in the state.

Ululani’s Hawaiian Shave Ice opened on Front Street in Lahaina just before Christmas in 2008. The shop was barely big enough for a shaving machine and operator. And yet, in less than two years, Ululani’s has acquired a devout following. On the recommendation of friends, locals have braved Lahaina’s tourist throngs for the first time in years just for a taste. Tourists have been known to visit the shop every day of their vacation, sometimes more than once. Glowing TripAdvisor reviews rank Ululani’s the number-one restaurant in Lahaina—never mind that shave ice is the only item on the menu. A second location, recently opened in Kahului, promises to be just as popular as the first.

David  and Ululani Yamashiro began making shaving ice seven years ago while living in Vancouver, Washington. The O‘ahu-born couple kept close to their island roots, practicing hula with a Washington halau. David’s sister hosts a Hawaiian-themed festival there every summer—but it was lacking something. Shave ice.

“We grew up eating good shave ice, so we knew what we wanted to emulate,” says David.

Ululani cashed in her retirement funds to buy a shave-ice machine and a supply of syrups. Their festival debut was so  successful they invested in three more machines. “From the moment we opened to when we stopped, we were making shave ice,” she says. “We had four lines, fifty people deep.”

Summer profits in Vancouver were good, but could they do this year-round? They ran the numbers and realized that shave ice could be their ticket back home to Hawai‘i.

Luckily for Mauians, they landed in Lahaina. Their motto: A taste of aloha in every bite. At Ululani’s, customer service is just as important as the product. David’s fine-dining background shows in how he trains employees. They’re encouraged to greet each person, be warm, and ask sincere questions. Take your time, he tells them, don’t rush from one customer to the next—no matter how long the line.

“When you have that personal touch, the whole shave-ice experience is magnified,” says David. 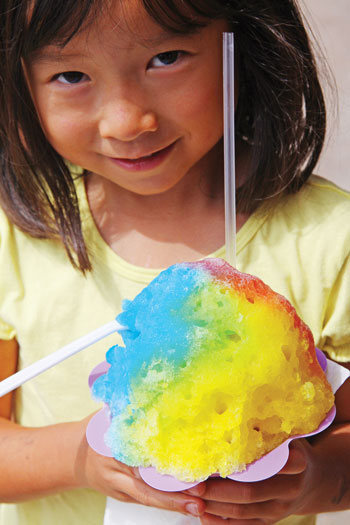 The “whole shave-ice experience” starts with the ice: Guided by the shaver’s calculated pressure, delicate flakes fall from the machine’s blade. The extra-fine shave achieves a creamy softness resembling ice cream, only lighter on the tongue. The shaver hands this sparkling blank canvas to the pourer, who stabs it all over with a straw to allow the syrup to completely saturate the ice.

“When we put in the spoon, if we encounter any resistance we toss it,” says David. Crunchy ice simply won’t suffice.

At first David bought the syrups used by popular shops, but was disappointed by the artificial flavors. “Strawberry is interesting,” he says. “On O‘ahu, everybody likes Harders syrup, but it doesn’t even taste like strawberry. They’re just used to it because they grew up with it.”

The majority of David’s recipes incorporate fresh fruit purée. The guava syrup exactly replicates the flavor of the sweet, fleshy fruit. Order kiwi, and little black seeds will land on your ice.

Purée alone won’t make a superior syrup, says David. “When you bite into mango there’s a little zip, a furriness on your lip. You’re not going to get that with just purée.” How does he recreate the zip? Trade secret.

In addition to the usual flavors, Ululani’s offers exotics like tamarind and hoku, a mix of star fruit and pineapple. The coconut is light and creamy, without being cloying. It’s one half of the Haleakala, one of the most popular combos. Paired with leche and crowned with a snowcap—a drizzle of sweetened condensed milk—it resembles Maui’s tallest peak on the rare occasions when it’s blanketed by snow.

Locals like to sprinkle their shave ice with mochi balls (75¢ extra) or li hing mui powder (free). On occasion, Ululani makes a small batch of tapioca. In this writer’s opinion, a large hoku, liliko‘i (passion fruit), and coconut shave ice topped with a snowcap and spoonful of tapioca is dessert nirvana.

One day David would like to open a shave-ice museum, to illustrate the worldwide appeal of this unlikely tropical dessert through displays of vintage machines, pictures, and paraphernalia. In the meantime, 100 percent customer satisfaction remains the priority. The Yamashiros aren’t in a rush to expand further—at least not until they’ve found a way to guarantee aloha with every bite.