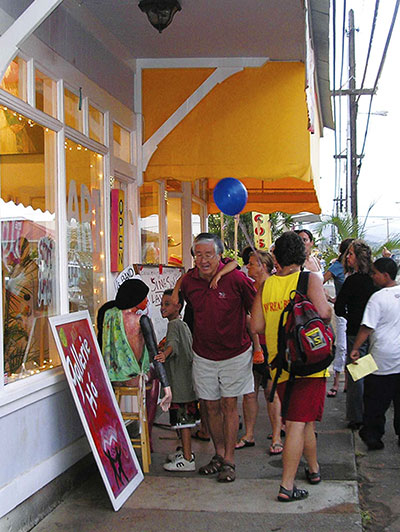 Wailuku’s a sleepy little town; it used to be the sidewalks rolled up after work on a Friday night. But these days, local merchants are stemming the exodus with a monthly block party—folks like Terry Edmonds, president of the Wailuku Community Association and owner of the Market Street shop If the Shoe Fits. The idea, says Edmonds, is to show people that “Wailuku is kind of Soho-ish. We’re trying to make it more that way, to be totally boutique.” And so, inspired by other First Fridays—like the one in O‘ahu’s Chinatown—they’ve come up with their own, one with live entertainment, food, shopping specials and the chance to mingle.

My foray into Wailuku’s First Friday was successful, especially for retail therapy. The bargain of the evening was an eight-dollar pink top I discovered while filtering through Bohemia, a consignment store where I shopped shoulder to shoulder with a blue-haired, tattooed girl. In fact, it was here I noticed the diversity around me: young urban professionals, baby boomers, kids and retirees. And the entertainment! A hula dancer performed to Hawaiian music at the corner of Market and Vineyard Streets, while down the block at Market and Main, twenty-somethings danced to reggae spun by a DJ.

Thanks to the success of the first three, First Fridays are scheduled for January 4—in honor of Dr. Martin Luther King, Jr.—February 1, and March 7. Hours are 5 to 7:30 p.m. See you there!