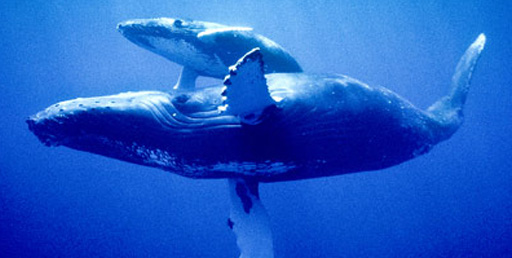 About fifteen years ago I was working for a Maui whale-watch company. Part of my job was to check passengers in as they boarded our boat in Ma‘alaea Harbor. I looked up from my manifest one day and straight into the face of Pulitzer Prize-winning humor columnist Dave Barry. I stammered, he was gracious, my boyfriend got to spend two hours as the trip’s star-struck naturalist, and Mr. Barry turned the event into a column. I read that column now and have to laugh — not because it’s still funny, which it is, but because so much of what we thought we knew about what humpback whales do in Hawaiian waters — the theme of that column — has changed.

The graphic gracing that Dave Barry column shows a whale crooning into a hydrophone dropped from a vessel above. He is singing a la Sinatra, obviously to attract females. It made sense to think that way — humpbacks come to Hawaiian waters to breed and give birth. The males sing: methodically, single-mindedly, loudly and constantly. Why? They must be singing to snag the hearts of females. It worked for Frank Sinatra, Elvis Presley and Eddie Vedder; it must work for humpback whales, too.

I contacted Meagan Jones, executive director of Whale Trust Maui, a nonprofit research and education organization, to find out what we know better now than we did then.

“We were doing research here on Maui and I had lived here for many years. We wanted our research efforts based here. And there was this synergy with Flip and Jim. I remember our first dinner: the artist [Flip], the educator [Meagan], and the researcher [Jim]. Flip said, ‘We need to do something together.’”

The crux of Whale Trust Maui’s research is the social behavior and communication patterns of whales: Why are males singing? What is the function of the song; why invest so much energy and time in it? To get that answer, Meagan, Jim and Flip (and a rotating cast of devoted volunteers) head out of Lahaina every day during whale season in a twenty-four-foot research vessel. They will find a singer and stay with him the entire day, watching and listening to piece this puzzle together. And I call it a puzzle because one of the first revelations of this research was that singers certainly do attract other whales. Males.

“I have yet to see a female approach a singer,” says Meagan. “We know that the females are listening, but that’s not what’s driving singers. They sing until another male comes; those two check each other out, then either split up or, in a minority of cases, team up and join a group with a female. You think because these are breeding grounds that it’s all about competition, but it isn’t. It’s changed the way we look at the social organization, about what’s happening here.”

What the females are doing, and maybe thinking, is the focus of Meagan’s research. “We know very little about females. The majority of them associate with males, but having a calf has a significant impact on how much they travel, rest, and interact with males. We played back to females sounds produced by males in competitive groups. Females with calves wanted nothing to do with those groups.”

Then there’s the question of why females with new calves tolerate the attentions of male escorts. After all, they’ve got a newborn to feed and protect in a sea full of predators. It turns out that older, larger escorts may offer some protection from younger, more aggressive males who don’t know how to behave yet.

Still, this communication and sometimes cooperation between singers and “joiners,” the whales attracted by singers, is food for thought. “I swear if you didn’t know these were males you’d think you were watching a mating dance, it’s that sensuous and graceful,” Meagan observes. “The breeding grounds are much more complex than we thought.”Running a nonprofit means you wear so many hats that your hats are wearing hats. Meagan is a researcher and an educator, among the list of checkboxes that could include PR maven, fiscal manager, grant writer and sailor. “Jim is a researcher twenty-four hours a day. My day is a little more divided,” she laughs.

Each year, Whale Trust Maui conducts a public event called Whale Tales, held this February 16 and 17 at the Maui Theatre in Lahaina, with benefit whale watches all three days. “Whale Tales is about raising awareness of what the research community is learning on Maui about these animals — and raising money for these programs,” Meagan says. The usual history of nonprofits is that they compete fiercely for what seems an ever-shrinking pool of research funding. Whale Trust Maui takes a different approach. “Whale Tales tries to be more inclusive, to support and collaborate with other research organizations. When this event started, Kapalua Land Company came to us and said, ‘We’d like you to develop this program and be the beneficiary,’ but Flip was instrumental in bringing other researchers in to benefit as well, primarily the Center for Whale Studies and Hawai‘i Whale Research Foundation. Last year we raised about $45,000.”

In 2012, an estimated 1,500 people attended Whale Tales presentations by researchers and photographers, children’s educational programs, book signings, and evening events — which culminated in a packed-to-the-rafters presentation by Flip Nicklin. Local whale-watch companies ran benefit cruises all weekend, and donated their profits. “We try to have our presenters on board for those whale watches,” Meagan notes with a grin. “They always sell out.

“So much of what we know about humpback whales has changed from when I moved here twenty years ago. They seem so accessible, but we barely know anything. We’ve never seen them mate or give birth. There’s no way we can protect them if we can’t understand enough about them to manage them and ourselves successfully. The research we’re doing requires so many things to come together — whales, weather, equipment. . . . When they do, those are the best days — when you’ve done everything you expected to do, or saw something you never did before. Every day on the water is that kind of adrenaline. It never gets old.”

No living animals have captured our imaginations as have the great whales. . . . They inspire our art, literature, and music. And so they should. The indescribable blend of grace, power, and beauty of a whale as it glides underwater, leaps towards the sky, or simply lifts its flukes and slides into the sea symbolizes a vanishing poetry of the wild. — Dr. James Darling, With the Whales

Geocaching: Thrill of the Cache

A Perfect Day in Kapalua

The Art of Cassie Pali