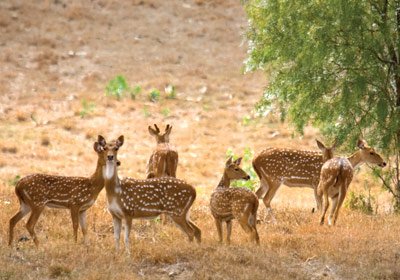 On the leeward slopes of Haleakala, Paula Hegele stands amid tidy rows of twisting vines festooned with fat bunches of purple-blue grapes. Hegele is president of Tedeschi Vineyards, Maui’s only commercial winery. She says that three years ago, the scene was not so pretty.

“We were told they would only eat the tender little tips,” she says of the axis deer. “In the morning we would come in and acres would be eaten. They ate beyond the tips. They ate and pulled the vines. They ripped the canes. The first year we lost the crop. They ate what would have been the following year’s crop.” Even two years later, Hegele kept some acres out of production because vines hadn’t grown large enough to sustain the fruit.

“For farmers,” she says, looking across the vineyard’s twenty-three acres, “watching your hard work just disappear is beyond dollars — it’s an emotional loss.”

Twenty miles away, just below Hali‘imaile, pineapples ripen under cloudy skies and the vigilant eyes of Doug MacCluer. MacCluer has been farming here for over forty years and is a shareholder of Maui Gold Pineapple Company. Despite the challenges of trying to make a living off the land, he hasn’t lost his enthusiasm for the prickly bromeliad. “It’s the sweetest fruit and it grows well here.” But axis deer are cutting into what’s already a very thin profit margin. MacCluer says local farmers need a specialized product to compete with mainland growers, for whom water, fertilizer, fuel, and labor are much less expensive. “Pineapple is a niche. All tourists have to eat pineapple and we have the best product in the world.” 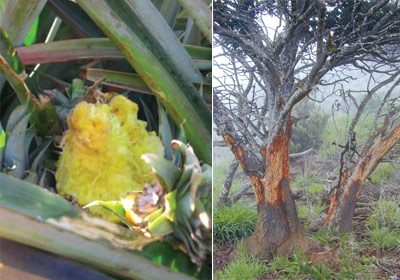 Unfortunately, axis deer think so, too. “We have deer all over the place. They hammer the new plants that we’ve just planted. They damage the drip tube and mulch paper and pull out the plants to eat them.” MacCluer says the deer cost the company two acres of production last year; he estimates losses over the years at over one hundred thousand dollars.

It’s a bit hard to imagine that these rufous creatures from India can wreak such havoc. Adults are only three feet tall at the shoulders. The white spots spattered across their sides conjure images of Disney’s fabled Bambi. Axis deer trace their history in the Islands to King Kamehameha V, who received eight animals as a gift in 1867. The deer have been especially successful at establishing on Moloka‘i and Lana‘i; in 1959 and 1960, after much debate and assurances the deer would not penetrate native forests and that hunting would keep populations in check, axis deer were released on Maui near Ka‘ono‘ulu Ranch and Pu‘u o Kali. History has not been kind to those assumptions.

As the deer spread across the island, Maui’s ranches began to suffer. Alex Franco, president of Maui Cattle Company, says the deer exacerbated problems caused by multiple years of drought. Ranchers often “bank” or rest some pastures to make it through the dry summer months. But cattle fences are no barrier for deer that easily leap their way to greener grass, munching down pastures before ranchers can rotate herds to those fields. Franco says, “They’re taking a lot of the good groceries we need for our cattle.” Some ranches have had to ship animals to the mainland at eight to ten months old, instead of finishing them on Maui, which translates to fewer head for processing and less Maui-grown beef available for the local market. The impact nearly shut down the eleven-year-old company. Franco says ranching is a tough business, but the ranchers want to see the tradition and commitment to producing local food continue. “That would be a big poho [waste of time] if we can’t keep it around for the next generation.”

Axis deer are not a new issue. In 2001, a working group formed to tackle the problem but never got past a draft plan. The informal Maui Deer Working Group restarted three years ago. Participants include farmers and ranchers, hunters, wildlife biologists, government representatives, and leaders from the hospitality industry. The new group has completed a draft management plan focused on a community-based approach and hired a coordinator with funding from the State and County. Biologists say that in the intervening years, the deer population has probably increased by 20 to 30 percent annually. Ranchers have reported herds of up to 1,500, but no one really knows how many deer there are, only that there are a lot more than there used to be.

State Wildlife Biologist Fern Duvall, with the Hawai‘i Department of Land and Natural Resources, says he used to hear deer in the gulch behind his house in Makawao only during the rutting season. Now he hears them throughout the year. Duvall also worries about destruction of native plants and seabirds. “The deer trample plants and strip them down to sticks.” Axis deer ate the last wild plants of Hawai‘i’s rare state flower, the yellow Hibiscus brackenridgei, in the Pu‘u o Kali area. At Kanaha Pond, a wildlife sanctuary for endangered Hawaiian coots and stilts, Duvall says the deer are “selectively eating all the plants we’ve been propagating and putting out.” The deer even eat hardy naupaka plants, whose roots help stabilize dunes and provide habitat for nesting wedge-tailed shearwaters, which lay a single egg deep in a sandy burrow. It’s a one-two punch: the deer’s sharp hooves also poke through the tops of burrows, injuring chicks or leaving them exposed to predators such as feral dogs and cats.

For some residents and visitors, Maui’s deer problem is striking closer to home. Bud Pikrone, general manager of the Wailea Community Association, has had deer jump over the hood of his car on his way to work. Pikrone is concerned about the increasing potential for serious car accidents; in 2011, the association logged nineteen deer-vehicle collisions just in the resort area. 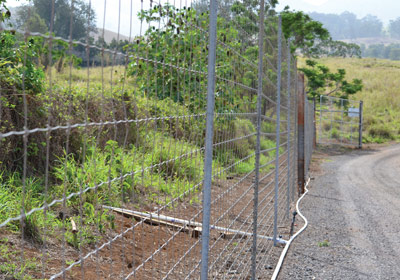 On an early morning, before the sun reveals the muted greens and browns of Maui’s backside, Brian Etheredge, chef-owner of Wailea’s Capische? restaurant, is dressed to blend in. He’s in Kahikinui with a hunter friend. Etheredge picks up his bow, drops to his knees, places his hands in the rust-brown dirt born of ancient volcanic flow, and states his intention — asking for what he hopes to harvest, a practice he learned from a Hawaiian friend who taught him how to hunt. “There’s a shift that happens,” he says. “It’s primal. When I start walking through the woods, I’m a changed man. You can hear every single twig crack in the woods. You can smell everything. You see things differently. I become a part of their world.”

It’s not just about the experience for Etheredge. To the finely tuned palate of a top Maui chef, the lean meat of axis deer is “ten times better than store-bought beef.” Etheredge says he would carry axis deer on the menu “in a heartbeat.” But he can’t offer the deer he hunts to his customers. Food-safety laws require a clean head-shot to the deer, observed by a federal inspector, in order to sell the meat. Technically possible, but financially and logistically impractical, at least for now. A hunter-harvester would have to pay the inspector to tag along on every trip — with no guarantee of a kill. Maui’s public hunting areas are rarely frequented by axis deer, which seem to prefer foraging on the island’s golf courses, farms and home gardens, where there’s a lot less gunfire to upset their digestion.

The difficulties haven’t dissuaded attempts to bring the prized venison to market. With seed funding from the County of Maui, a local harvesting cooperative has begun testing a bait-and-corral approach. According to Mike Tavares, the co-op’s current president, they hope to have Maui-raised venison at a local market and several restaurants in 2013.

But Tavares also admits that even if the pilot venture is successful, it won’t be enough to address what he calls a coming “epidemic.” Duvall agrees, and says scientific studies suggest annual harvests of at least one third of the herd would be required just to keep the population at current levels. Any way you do the math, that’s a lot of deer.

What does the future hold for axis deer on Maui? It’s a challenge that’s been decades in the making, with high personal, environmental and economic stakes. Whatever solutions emerge from the latest initiatives, one thing is clear: axis deer are probably coming soon to a property near you, whether it’s in the backyard or on a dinner plate.