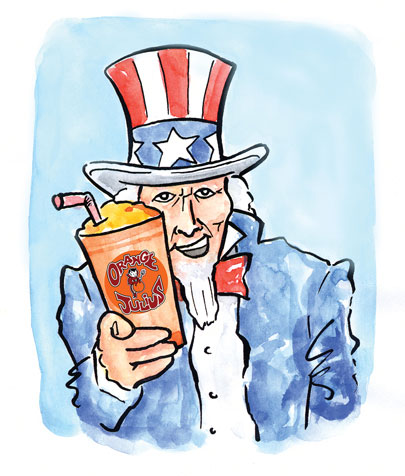 As Hawai‘i this summer marks the fiftieth anniversary of its admission to the Union, learned pundits will explore important social, economic and political changes statehood brought to the islands.

But because most of the pundits weren’t here back then, they might miss the most important one.

Sounds crazy, but stay with me.

Before statehood, Hawai‘i was a U.S. territory, so we had our share of U.S. stuff—U.S. military bases mostly, but also American cars, movies, canned goods and baseball gloves. The Stars and Stripes snapped from every flagpole. U.S. celebrities vacationed at Waikïkï.

Despite all this, Hawai‘i’s ties to the U.S. felt a bit tenuous, and vice versa. When our relatives went to the mainland, we’d say they were “going to America.” For their part, many mainlanders were hesitant to visit something as remote and possibly dangerous as a “territory.” Who knew? There might be cannibals in those grass houses.

Further clouding the issue were competing allegiances. Our schoolbooks and legal system may have come from “America,” but much of our popular culture was Asian. We ate pickled Korean cabbage, watched Japanese samurai movies on TV, listened to Filipino radio, and left our slippers outside the door.

So even as tectonic political forces were nudging Hawai‘i toward statehood, many islanders did not feel fully vested as “Americans.” Likewise, many mainlanders—especially southern senators —were reluctant to award a star on the U.S. flag to a brown-skinned society that ate raw fish and seaweed. It looked like a standoff.

Then the franchises arrived.

The first one I recall was Orange Julius. In 1956, the year I turned ten, a little stand opened inside the Waikïkï Arcade, which also housed a bowling alley and a Japanese tailor shop that sewed custom-order surf shorts.

After watching the bowlers one idle afternoon, I was led by the whine of a blender to the new Orange Julius stand nearby. After seeing several pleased   customers down this frothy cocktail of confectioner’s sugar, crushed ice and orange juice, I ordered one as well. I could feel myself growing more American with each quaff.

After Orange Julius, the floodgates opened. As statehood neared, the territory greeted its first McDonald’s franchise with lines around the block. Burger King came next; then Colonel Sanders raised his silvery head. A&W root beer foamed up, followed by International House of Pancakes, Denny’s, Jack in the Box, Taco Bell, and a small army of pizza purveyors.

Always curious about the new, islanders took these snazzy franchises to heart, but it worked the other way, too. Mainlanders hesitant about visiting a place that might have flying cockroaches as big as barn swallows were comforted by the presence of familiar franchises.

“They have Orange Julius there,” they’d reason. “Maybe those cockroach stories are exaggerated.”

Retail shopping was another Americanizing influence. Back in the Territorial era, our stores had solid island names like Arakawa’s, Okada’s, Ming’s and McInerny’s. If you came to Maui, you could shop at Ikeda’s, Craft’s Drug or Peggy and Johnny’s.

But in the statehood year of 1959, Hawai‘i’s first mega-mall opened at Ala Moana on O‘ahu. Thrill-crazed islanders discovered Sears, Thom McAn, Woolworth, JC Penney. We were already eating American. Now we started shopping American as well.

Today, fifty years after statehood, Hawai‘i has become so solidly American it has started its own franchises. Zippy’s restaurants, Leonard’s bakeries, and Maui Divers have gone statewide, as have dozens of other small businesses. A few courageous isle franchises have even “crossed the pond” to set up on the mainland—L&L Drive-In, Maui Tacos and Roy’s among them.