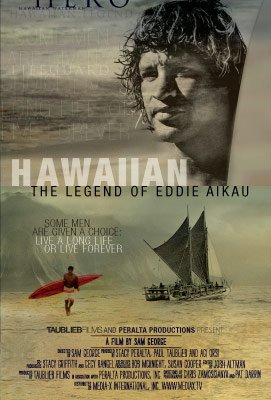 On March 16, 1978, the Hokuleʻa, a Polynesian voyaging canoe bound for Tahiti, capsized in rough waters under a pitch-black Hawaiian sky. With no rescue in sight, one fearless crewmember, a Maui-born big-wave surfer named Eddie Aikau, paddled off on a surfboard in search of help.

The crew was eventually saved, but Aikau was never found.

Hawaiian: The Legend of Eddie Aikau is the remarkable true story of a modern-day hero. The documentary will make its Hawaiʻi debut at the Maui Film Festival’s opening night Celestial Cinema on Wednesday, June 12, hot on the heels of its U.S. premiere at Tribeca.

Through candid interviews and edge-of-your-seat reenactments, this finely detailed film chronicles the life of a surfing icon and pays tribute to the heroism now immortalized in the phrase “Eddie would go.”

Writer and director Sam George, a lifelong surfer familiar with Hawaiʻi’s shore breaks, waved goodbye to the Hokuleʻa as it embarked on its ill-fated voyage thirty-three years ago. “It’s the best story that’s never been told,” he says.

Jaw-dropping footage and occasional surf lingo aside, there is more to this film than catching waves. “It’s not just a biography of a surfer,” says George. “It’s a story about modern Hawaiʻi.”

Like so many other Hawaiians in the twentieth century, Aikau struggled to remain connected to his cultural heritage. In the ocean he reclaimed his identity — riding the waves as Hawaiians have done for more than a thousand years.

“From the outset, we never saw this as a surf movie,” says producer Paul Taublieb. “Very few know Eddie’s story and why he is so important to the Hawaiian culture. His sacrifice helped spark the awareness of Hawaiian cultural identity.”

The poignancy of Hawaiian: The Legend of Eddie Aikau will set the tone for the eclectic slate of films to follow at the 2013 festival, which runs from June 12 through 16 at Wailea and the Maui Arts & Cultural Center’s Castle Theater.

Special-event and multilevel VIP passes are available at mauifilmfestival.com, where you’ll also find updates on screenings and other events.