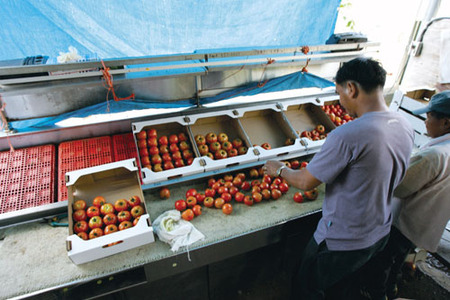 I shouldn’t have been surprised. Over the past decade, island farmers have cultivated highly successful niche markets. This past summer’s “Eat Local Challenge,” sponsored by Bon Appetit magazine, was hardly a challenge here on Maui, where the suggested 150-mile radius extended from Upcountry ranchlands down to the teeming Pacific Ocean. Nowadays, you won’t find just any cheese and tomatoes on Maui menus, but Oma‘opio goat cheese and Olowalu Nui tomatoes. In a climate like ours, who can blame chefs for a little name dropping? The time is ripe for a tour of local restaurants and the celebrity farms that feed them.

I started my tour at Tropica in the Westin Maui Resort—which, judging by Chef Luckey’s tantalizing show of ingredients, was a good idea. Shortly after he and his tray disappeared into the kitchen, I dug into an Olowalu Nui tomato salad. The modified caprese, cleverly served inside the tomato, was perfection. Micro-herbs and a sweet balsamic electrified the tomato’s sunny flavor, softened by rich mozzarella. Next, tangy poha-berry mustard complemented the lamb, served atop a dense, flavorful macadamia polenta. Crisp moi was surrounded by earthy, tender mushrooms. A subtle lavender crème brulee finished a meal composed almost entirely of food from neighborhood farms.

Olowalu Nui farm is hidden along a bend in the Honoapi‘ilani Highway. The soft-fleshed red and golden tomatoes ripen like gems on the vine in three pristine greenhouses. Farm owner John Applegate runs a tidy operation. The fruit is grown hydroponically—in nutrient-rich tubs that allow for maximum use of land and water. Even with year-round harvests, supply barely meets demand. The night I dined at Tropica, Chef Luckey ran out of his perfect tomato salad. Tropica is just one of several restaurants whose menu highlights the tomatoes, including the farm’s neighbor, Chez Paul.

I hardly need an excuse to stop in at Chez Paul. Over dinner I learned that chef/owner Patrick Callarec has an alternate source if he runs out of the “fresh Olowalu village tomatoes” on his menu—his own backyard. Astoundingly, Chef Callarec grows melons, beets, herbs, and more at his home nearby. For other needs—such as the succulent raspberries accompanying his chocolate cake—he scours local farmers’ markets. How he finds time to cook, farm, and shop is anybody’s guess.

Micro-herbs are must-have on nearly every fine restaurant menu, so I headed to the source: Fresh Island Herbs. Much of Maui’s best food comes from pocket-sized farms like this one, tucked into residential areas. On two acres in Kula 200, Michael McCoy grows what he calls “extra paint for the chef’s palette.” Inside a greenhouse, colorful trays of shiso, ruby amaranth, watercress, fennel, and chervil bring new meaning to the word “nursery.” If these baby-sized plants weren’t picked at the peak of youth, they’d grow to fill a farm just twice this size.

Micro-herbs are a pricey crop with a comparatively small yield—but the tender, flavorful sprigs are in high demand. McCoy’s clients include wholesale distributors and around 30 individual chefs. He tailors orders to chefs’ needs. Perry Bateman, executive chef at Mama’s Fish House, reportedly likes the “girly mix”—a blend of especially frilly micro-herbs. Alongside the micro-herb nursery are rows of full-grown cilantro, lavender, and sage. Ever the entrepreneur, McCoy is also testing his success with citrus, cherimoya, loquat, and a new variety of avocado.

The Tastings menu boasted another seasonal orchard treat this fall: Hashimoto persimmons. Chef Derek and his wife Sandy took field trips up to the Kula farm for the glossy, deep orange fruit. Native to China, persimmons grow well in Kula’s temperate climate and are coveted throughout Hawai‘i. Chef Derek lightly smoked the persimmons, drawing out their perfumed flavor. He tossed them with spinach, spiced nuts, and blue cheese, creating a gorgeous alternative to beet or pear salad.

At Pineapple Grill, Chef Joey Macadangdang can nearly reach out a window to pick his fruit—the restaurant is a just block away from Kapalua’s signature “Maui Gold” pineapple fields. This new variety, grown only on Maui, is sweet and deep gold with low acidity. Chef Macadangdang uses the fruit in several dishes, including his braised short ribs and pineapple upside-down cake. Back at Chez Paul, Chef Callarec turns half a Maui Gold pineapple into an edible bowl for his classic crème brulee.

Lest you carnivores think it’s just a bunch of rabbit food, note that Maui Cattle Company now supplies many island restaurants with top-quality beef from Haleakala, Ulupalakua, and Kaupo ranches. Pineapple Grill, Hali‘imaile General Store, Nick’s Fishmarket, and Alan Wong’s on O‘ahu are among the top-class establishments serving local ribeye and tenderloin. Look out, Kobe beef—Kaupo is hot on your hooves.

Eating local is a practice everyone benefits from: Maui’s small farmers benefit from direct sales, the environment benefits from fewer resources exhausted in transporting produce, and the customers benefit from the freshest flavors possible. Fruits and vegetables only keep their vitamins for so long—the quicker we eat them, the more we’re getting. And truthfully, what is more luxurious than a perfectly ripe, homegrown tomato?