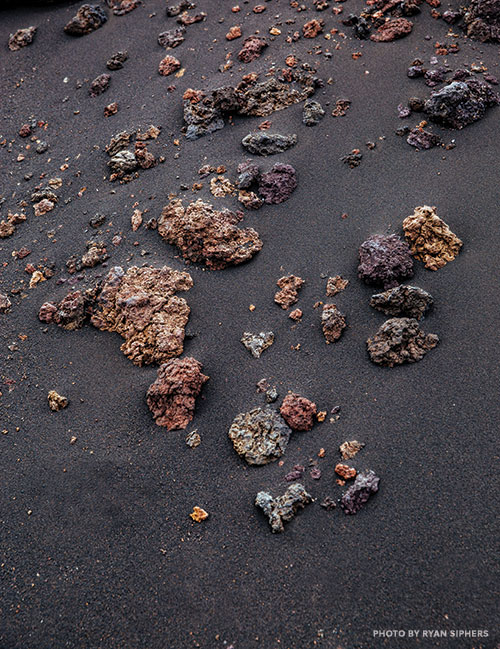 I’ve worked for three national park sites on Hawai‘i Island and on Maui, and rocks would regularly arrive in the mail, most with a letter wrapped carefully around them, profusely apologizing for their removal.

This phenomenon has been known for decades as “Pele’s Curse,” the belief that removing things native to Hawai‘i that belong to Pele, such as rocks, sand and pumice, will bring bad luck to the pilferer. The goddess of fire represents all things volcanic, and as the saying goes, she regards rocks as her children and removing even the smallest stone from the Hawaiian Islands can land you in hot lava. The only way to break the curse is to return the stolen items to their place of origin.

Indeed, many people who have pocketed a pebble or two have reported an unusual amount of bad luck. Pets die, businesses fail, relationships end in an eruption of emotion.

“[Pele’s Curse] is definitely a thing, and we get about 100 packages a month,” says Rachel Hodara, archeologist and cultural resources program manager
at Haleakalā National Park. This, despite the regular public-service announcements the park sends out to discourage rock removal. “We freeze the [returned] rocks for 30 days to kill any possible invasive organisms,” says Hodara. “Then we put rocks [from] the park back in the park and we take boxes of sand down to the beach.”

Before the overwhelm of Western contact, Hawaiians consulted kāhuna (priests) about moving pōhaku (stones), perceiving the islands as alive in every detail, and every detail essential to the vibrancy of the whole. Like so much of traditional Hawaiian life, this is a beautiful and thoughtful way to live with deep respect. It is, however, a nuanced and complex set of concepts, not easily communicated, say, on a tour bus. Over the years, that has made me wonder if it isn’t just easier to let the threat of a curse do the heavy lifting for what Hawaiians might term pono, or intrinsic rightness.

“The curse is [probably] the main reason people don’t take things,” says Hodara. “But we focus on respectful resource protection and the cultural perspective.” What’s more, she reminds me, the National Park Service laws prohibit taking plants, fish, wildlife, or rocks from any national park.

Kainoa Horcajo, former Hawaiian cultural ambassador at the Grand Wailea Resort, unpacks it this way: “I [once received] rocks sent to the hotel with a letter that said, I took these rocks on our vacation even though I was told not to, and my business has suffered ever since. Please return them to their right place so that my business may be restored. Security brings these things to me very carefully, with this idea that the rocks are cursed. But I say the rocks aren’t the problem, the person is the problem. We love to assign blame externally, [but] the idea of a curse is such a Western concept.

“This thing [this rock] that the Western world regards as an inanimate, lifeless object, Hawaiian culture conceptualizes as a physical being that has been able to bind, to make solid, all of the energies from the very beginning of time. So, who is important here? Not us. What’s important is the pōhaku.”