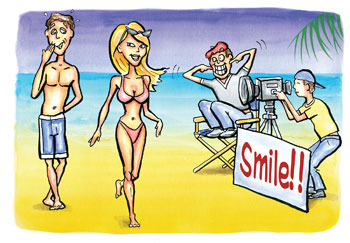 “She’s going to get out of the water and walk straight past you,” said the director. “Keep staring, and don’t, for any reason, take your eyes off her ass. And smile, Jack. Heck, it’s okay to drool.”

Okay, rewind. I should explain that my friend Jack Hagarty recently spent three days as an extra on Adam Sandler’s new romantic comedy Just Go with It, filmed in part on the beach at Maui’s Grand Wailea Resort, and also starring Nicole Kidman and Jennifer Anniston. The okole Jack was being paid to stare at belonged to swimsuit/lingerie supermodel Brooklyn Decker.

Jack’s not the kind of guy you’d normally hire for that kind of work; he’s quiet around strangers, and the model of chivalry toward the opposite sex. I wasn’t surprised to hear that it took four or five takes with him to elicit a suitably lecherous look.

Weeks earlier, Jack had lined up outside the Lipoa Center in Kïhei, along with about 2,500 others, for a casting call.

“It was like Picture Day in high school,” he says. “In the morning, you lock yourself in the bathroom for a prolonged grooming session, practice various smiles in the mirror, change your outfit half a dozen times, then head to the casting location . . . where you fill out a form and wait in line. Hours go by. Just as you think you’ve begun to sprout roots, they call your name, snap your picture, and send you on your way.”

Weeks later, Jack got the call. He spent most of his four days on the set lounging by the pool, wearing the same board shorts day after day, but cast alongside a different romantic interest in every scene. In one, Jack was parked at a poolside table with mock cocktails (watered-down Gatorade) and faux girlfriend.

Their instructions: Order food and drinks, converse and be romantic—all in pantomime, so no microphones picked up their voices. The challenge: To flirt at your pretend sweetie when  the waiter is her real-life boyfriend. Her bigger-than-you-are boyfriend. Attempting flirtatious body language with her, while engaging in reassuring head shakes and hand gestures towards him, was unnerving. By the time the scene called for Jack to order lunch, it was all he could do to point shakily at the menu. “Very well,” the waiter whispered. “‘Cobb salad with extra bananas’ it is.”

On the second day, Jack found himself doubling for another extra who’d just been given a small speaking role. Compared with the first day’s make-believe romance, this was a piece of cake—even if it meant being given a sailor’s crew cut and uniform, and trying to act at ease while filmed from above by a helicopter churning up wind and a deafening roar.

The Great Paparazzi Battle came on day three. Hawai‘i’s coastlines are public domain; you can’t section off an entire beach for filming. The best you can do is establish a line behind which onlookers can gawk. That day, five paparazzi showed up with ladders and cameras, occupying the section with a tenacity that rivaled the Allies landing on the beach at Normandy. What did they care if they’d be in the shot? Enter Jack et. al. Equipped with paddle boards, surfboards, boogie boards and skim boards, Jack and a posse of twenty-plus extras formed what can best be described as a moving human fence with an aquatic sports theme. Like synchronized swimmers in dry dock, they repositioned themselves, blocking the lenses of each paparazzo.

To my surprise, Jack’s most sublime experience was “the moment Nicole Kidman smiled at me. From two feet away, this elegant woman in high heels and a wide-brimmed hat walked towards me . . . and smiled.”