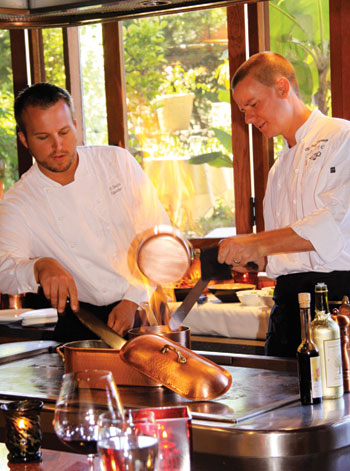 Among the most enviable perks a food writer enjoys is having a skilled chef close the menu and say, “Let me take care of you.” The procession of special dishes sent to the table, the chef’s personal explanation of each course as it arrives—these elevate an ordinary dinner to something truly memorable. Don’t waste time being jealous. Experience this celebrity treatment yourself by booking a seat at Il Teatro, an intimate stage where the chef performs just for you.

To find this culinary hideaway, descend the stairs at Capische restaurant—already a classy destination—and wind your way through the torchlit garden. You’ll be ushered into a private room, a tiny restaurant of its own. Glowing copper pots, bundles of herbs, and ramekins of spice frame the tall windows that open onto the garden.

Guests at Il Teatro sit around two teppanyaki tables that have swapped their Japanese passports for Italian. Forget fried rice and chopped sirloin, these cooktops now produce sous-vide rib eye and hand-cut pastas. But like teppanyaki, every dish, from the amuse bouche to the dinner’s finale, is created right in front you. As your waiter pours prosecco, your chef chops Hana tomatoes for bruschetta dressed with barrel-aged balsamic.

Il Teatro’s curtains go up on weekends only, for a minimum of one thousand dollars (per group) and a maximum of ten guests. During busy holiday seasons, couples can try reserving seats alongside others. Twenty-four hours’ notice is required. The chefs discuss dietary restrictions and desires with guests beforehand, then craft the menu around what’s available from local farmers and fishermen. Each dinner is a labor of love, involving hours of preparation. With limited rehearsal and no hiding backstage, chefs at Il Teatro have to be on their game. And these chefs are.

Brian Etheredge moved to Maui in the late ’90s, after graduating from Hyde Park’s Culinary Institute of America. Leaping up the corporate ladder at the Grand Wailea Resort, he left his sous chef post behind in 2001 to ultimately assume ownership of Capische.

Classically trained and full of energy, he began building a reputation for precise, luxurious Northern Italian cuisine. Hidden in what was then a private, almost-unknown Japanese hotel, the nine-table Capische became the haunt of the Wailea jet set. Etheredge collected one accolade after the other, including the prestigious Chef of the Year ‘Aipono Award in 2008, nominated by his colleagues and bestowed by this magazine.