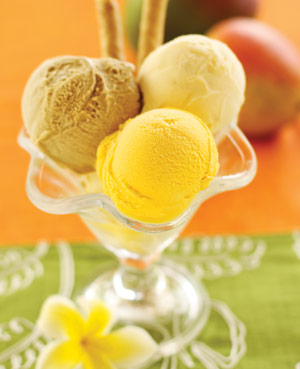 As an only child, I knew from a very young age that my parents hoped I would follow in my father’s footsteps and eventually take over the family business. I would have done that gladly, had our business been ice cream rather than dentistry.

A more dutiful daughter than I, third-generation ice cream maker Cathy Nobriga Kim started working in her family’s ice cream plant when she was fifteen years old, making Popsicles and other frozen novelties. Today she is manager and vice-president of Roselani Ice Cream’s production division, the head and the heart of the operation. If not for her famously warm and generous personality, you might say ice cream runs through her veins.

Cathy’s grandfather, Manuel Nobriga, began making ice cream from scratch at Maui Soda & Ice Works back in 1932, ten years after he joined the company as a horse-and-wagon ice-delivery man. His formal training consisted of reading a book on ice cream technology. Once he understood the science of creating the frozen treat, his instincts and discriminating palate were all he needed to concoct his special recipes — many of which are still used today, including the best-selling haupia, based on that island favorite, coconut pudding.

By 1941, when his son David “Buddy” Nobriga started working for Maui Soda & Ice Works, Manuel was a manager and an investor in the company, and in 1946, the Nobriga family became the majority shareholder. Then, as now, Maui Soda & Ice Works was best known as the local bottler and distributor of Coca-Cola, having held the franchise since 1924.

A stickler for consistency and quality control, Manuel would taste-test the Coke right off the bottling line. “He’d pop the cap off, drink the whole bottle at once, then wait for the burp,” Cathy recalls. If the burp left a certain aftertaste in his throat, the soda had his seal of approval. If not, he’d make adjustments.