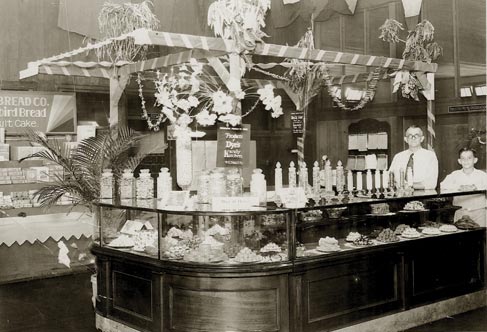 To most folks, Bob Dye is the mild-mannered manager of the upscale Shops at Wailea. But the fifth-generation Islander has two claims to fame. Dye’s great-great-grandfather Augusto Dias was Hawai‘i’s first luthier, and one of three Portuguese immigrants who introduced the ‘ukulele to the Islands.

“My great-grandfather, John Dye, was a candy maker who came to Hawai‘i in 1898,” says Bob. “He married Augusto’s daughter, Georgina, and opened Dye’s Kandy Kitchen in the Alexander Young Hotel around 1908.”

John renamed the store after the birth of his daughter, Ellen. Across three generations and fifty-four years, Ellen Dye Candies was the Godiva of the Pacific. In 1927, John became the first to dip macadamia nuts in chocolate.

“Legend says John dropped a mac in a vat of chocolate,” says Bob, “but it probably wasn’t an accident. Candy makers are very creative.”

In 1960, the family sold Ellen Dye Candies to Mamoru Takitani, who had left his family’s business, Star Ice & Soda, and moved from Maui to O‘ahu to seek his fortune. Takitani renamed the company Hawaiian Host.

Half a century after getting out of the candy business, the Dye family is back. Bob says he, sister Shelly, and a calabash cousin will open Waimea Chocolate Company, beginning with mac nuts covered in dark and milk chocolate, all hand-dipped, and all made from cacao beans grown and roasted in Hawai‘i. If you can’t wait for the first brick-and-mortar shop, log on to www.waimeachocolatecompany.com