The pings of oversized drivers meeting ball, the quiet whir of golf carts, driving ranges jammed to capacity, and the keen looks of golfers watching putts nearing the hole . . . golf season is upon us. From new clubhouses, to fleets of new golf carts, to on-course renovations, Maui golf courses have spruced up for summer. 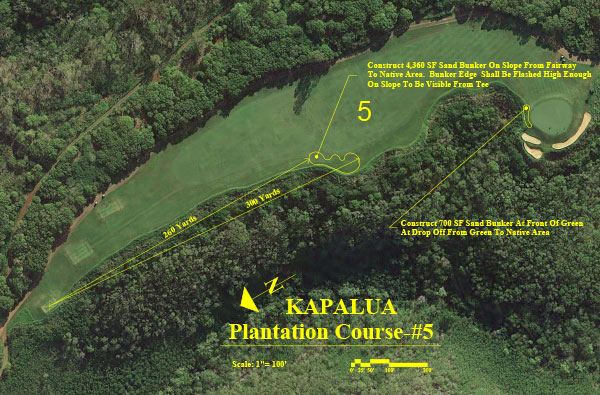 The Kapalua Plantation Course, home of the PGA Tour’s annual Hyundai Tournament of Champions, will see some tweaks over the next seven years, with the 2014 portion well under way.

Ben Crenshaw, the two-time Masters champion who designed the course with Bill Coore, watched the Hyundai in January and came up with ideas for immediate change.

The first, says Mike Jones, director of golf operations for Kapalua, is to add a greenside bunker to the fifth hole. The hazard will actually save balls from worse options that lurk behind: the Moloka‘i fescue that Crenshaw and Coore incorporated in their original design in 1991, and beyond that, a miniature Grand Canyon where many a golf ball has found its final resting place.

The eighteenth hole, once the longest on the PGA Tour, is adding a tee placement between the 663-yard tournament tee and the 585-yard regular tee. “Weather patterns have changed,” Jones explains. Kona winds (from the south or southwest) occur more often now, and they can make the eighteenth play longer than the yardage on the scorecard. “The one complaint we hear from the tour pros and from golfers who challenge themselves on the tournament tee is having to play into the wind on eighteen, which makes the second shot on this challenging par 5 more difficult. The new placement offers an alternative back tee that’s 40 yards closer, thus making the second shot more manageable and giving those players who hit  quality shots a better chance of making par, or even birdie.”

The Plantation will also add a new tee on No. 1 with the same sort of options in mind. At the Kapalua Bay Course, a $500,000 renovation of the bunkers is under way.

Jones says, “The ownership at Kapalua Golf is committed to keeping it one of the best in the world.” 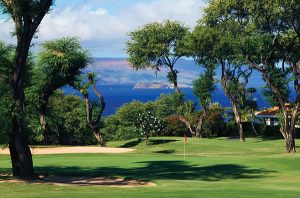 When the Wailea Blue Course opened in 1972, its clubhouse was the very first building to open at that South Maui resort. Now that it’s the Wailea Old Blue, its clubhouse is moving back to that original location on Wailea Ike Drive. (Could it be because its next-door neighbor will be Manoli’s Pizza Company?) The move happens in November.

Playing the course may feel a bit new, too. Barry Helle, the Old Blue’s general manager, says, “We are not going to be changing the golf course per se, but we will be playing it in a different alignment. We are looking at hole No. 6 becoming No. 1, while hole No. 15, which is adjacent to the [old-new] clubhouse, will be the tenth hole.”

According to Helle, the realignment won’t cause any interruption in play. As for why the  clubhouse is moving? “It’s the old real-estate adage,” Helle says — location, location, location. “I think people are really going to enjoy the fact that we will be back where we started in the 1970s, when the Blue Course put Wailea on the map.

“We are right on the main intersection in the number-one resort in the world.”

Wailea Golf Club’s Gold and Emerald Courses are seeing changes, too. Their fleet of 170 electric carts has been equipped with upgraded GPS yardage units, and the locker rooms at the Gold & Emerald Clubhouse have undergone some renovation.

In 2013, Golf Inc. Magazine named Ed Kageyama one of the “Most Innovative People in Golf.” Ka‘anapali Golf Club’s general manager, Kageyama was one of only eighteen industry professionals worldwide to receive the award.

Kageyama’s innovations include Golf My Way, which allows golfers to play eighteen holes over a seven-day span; and the FIT club, a golf membership whose monthly dues of $99 let players do walking golf in the afternoon on the otherwise cart-mandatory course. Working with Roy’s Kā‘anapali restaurant, located in the golf clubhouse, Kageyama also created the Wine, 9 and Dine program, which gives two players nine holes of golf, followed by pupu and wine tasting for $179.

Ka‘anapali also has several summertime programs, and juniors ages seven to seventeen play for free with a paying adult after 2:30 p.m.

The Dunes at Maui Lani has added thirty-two new Yamaha golf carts and twenty-three new sets of Nike golf clubs to its rental program. The Central Valley course also has a new yardage book, and a new drainage basin for the tenth fairway that is grassed and playable.

In Waikapu, the private King Kamehameha Golf Club has reduced initiation fees to $20,000 for unlimited golf and $10,000 for part-time memberships, while its “Guest for a Day” rate is $170. Through

July 31, visitors can play the adjacent public Kahili Golf Course for $49. The $250 Kahili Mahalo Ticket buys two rounds at Kahili and one at King Kamehameha.

Some of the biggest changes in Maui County golf are happening on the little island of Lana‘i, where The Challenge at Manele recently unveiled a new clubhouse restaurant, featuring a contemporary design inspired by the works of early Hawaiian artisans, and views that will inspire the rest of us. (There’s also a  redesign in the works for Manele’s sister course, The Experience at Ko‘ele, with Jack Nicklaus directing the shots.)

Scott Ashworth is the new director of golf for the two courses. A former president of the PGA Aloha Section, Ashworth has more than twenty-five years’ experience in the golf industry.

“It’s a new position,” says Tom Roelens, general manager of Four Seasons Resorts Lana‘i. “We’re delighted to have Scott at the helm as we elevate our golf program.”