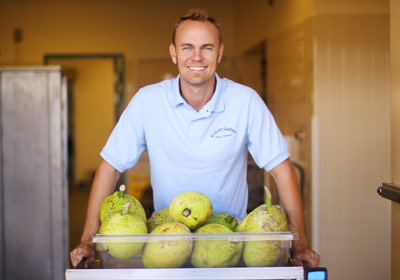 As it turns out, one breadfruit can feed a family, and one variety a people. Packed in coconut-husk fiber and dry leaves, ‘ulu accompanied the Polynesian voyagers in their canoes bound for Hawai‘i. Long domesticated, the seedless fruit relies on human cultivation. And cultivate it they did. The first Hawaiians planted ‘ulu orchards that stretched for miles. In the trees’ dappled shade, they grew bananas, sweet potatoes, and wauke (paper mulberry). The largest of these agroforests, the so-called  “breadfruit belt” in Kona on the island of Hawai‘i, numbered around 144,000 trees.

In 1794, surgeon-naturalist Archibald Menzies of HMS Discovery described marching up from Kealakekua Bay in the “scorching heat . . . across rugged porous lava . . . when we entered the breadfruit plantations whose spreading trees with beautiful foliage were scattered . . . along the side of the mountain as far as we could see.”

Smaller ‘ulu groves flourished across the archipelago, including one stretching from Lahaina to Olowalu on Maui’s west side. “Halau Lahaina, malu i ka ‘ulu,” says the Hawaiian proverb: “Lahaina is like a large house shaded by breadfruit trees.” The small but authoritative book Hawaiian Breadfruit states that pre-Contact orchards produced an estimated 100,000 tons of fruit annually, capable of sustaining hundreds of thousands of people.

What happened? Cole shrugs. “Something made breadfruit less important to the ali‘i [royalty],” he says. “No one knows why — none of the kupuna [elders] we’ve asked. It’s a mystery.”

Breadfruit has always taken a backseat to kalo (taro) in Hawai‘i — in contrast with other Polynesian cultures. But the true significance of ‘ulu in these Islands has likely been underestimated. One mo‘olelo (story) credits the god Ku for introducing ‘ulu to Hawai‘i. During a famine, Ku witnessed his mortal family’s suffering and sacrificed himself, to be reborn as an ‘ulu tree. Hawaiian maidens were thus advised to “Nana no a ka ‘ulu i paki kepau,” or “Look for the gummy breadfruit,” meaning they should marry mature men of substance, like Ku, who would provide for them.