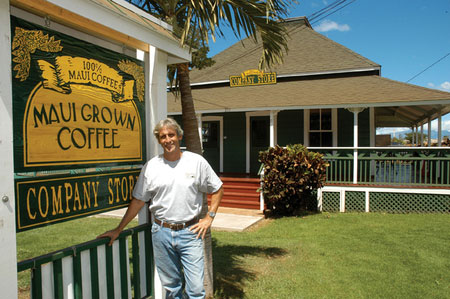 Few visitors leave Hawai‘i without sampling a cup of world-famous Kona coffee or stashing a souvenir pound of beans into their suitcase. Grown on the southwest slopes of Hawai‘i Island, 100 percent Kona coffee is among the world’s best and priciest brews. At $30 a pound, it’s double the cost of coffee grown just about anywhere else in the world. Enterprising Maui farmers hope to dip their cups into the increasingly lucrative specialty coffee market.

Over the past century, little has changed in Kona’s coffee orchards, some of which date back to the 1800s: ripe coffee cherries are still meticulously hand-picked, pulped, washed, and sun-dried. The region’s well-drained volcanic soil and tropical rain showers produce a coffee noted for its floral aromas, smoothness, and bright acidity, which, as with wine, enhances the more subtle flavors. Kona coffee farmers have weathered the tempestuous international market by forming collectives and working together to defend the quality of their product and promote it worldwide. As a result, 100 percent certified Kona coffee occupies the highest echelon of coffee sales, commanding premium prices for labor-intensive, small-batch harvests. Coffee grown on Maui, Moloka‘i, Kaua‘i, and O‘ahu never gained the same momentum, and continues to retail for an average of $15 a pound.

Compared to Kona’s 650 coffee farms, Maui is an upstart with just a handful of growers. Most of these farms, like those in Kona, are less than 8 acres and family-run. Soon however, two new Maui operations will equal a third of Kona’s entire coffee-growing belt. Together, MauiGrown, Inc., and Friendly Isles will put around 700 acres into production. While Kona purists argue that the region’s ideal growing conditions can’t be replicated, Maui growers are exploring new territory. David Gridley, founding member of the Maui Coffee Association and owner of Maui Oma Coffee, advises farmers to create a distinctive flavor profile. “Don’t try to be Kona,” he says. “Do something unique.

“Maui is every bit as marketable and recognizable a name as Kona,” says Gridley. “It’s just about educating the consumer.” Roasters and retailers, such as Maui Oma and Maui Coffee Roasters, are important industry allies; they create the buzz around the bean. Gridley’s doing his part to educate the coffee-drinking masses: at fine restaurants throughout the state he’s sponsoring French press programs—small, individual brews that allow for sampling an assortment of coffees. For example, at Merriman’s (on the Big Island) and Longhi’s (Maui and O‘ahu), diners can order a “flight” of Hawaiian coffees to compare the flavors of Maui, Kona, and other Hawaiian beans.

Maui Coffee Roasters owner Nick Matichyn reports selling around 250 bags of Maui coffee a year, compared to 1,300 bags of Kona. If done well, he says, Maui coffee could claim a much larger percentage of his retail sales. Implementing new varieties and technologies, Maui growers are working toward that goal.

MauiGrown Coffee and the Thousand-year-old Bean

“Maui as an origin can be just as good as Kona,” says Kimo Falconer, owner of MauiGrown Coffee, Inc. “We just need to select the right variety.” He began hunting for that variety 20 years ago, while working as the head of Ag Research for Amfac, one of Hawai‘i’s dominant sugar companies. He imported several types of Arabica coffee trees that he hoped would do well in Ka‘anapali’s hot, dry climate and low elevation. A 500-acre orchard was ripe with coffee cherries ready to be harvested when September 11 shook the nation. The following economic slump caused Amfac to abandon the venture.

“Sitting up in my office, I had to watch the trees die every day. That was horrible,” Falconer recalls, “but it got me to thinking. That was the genesis of the project for me.”

Falconer’s own project, Ka‘anapali Coffee Farms, is an innovative blend of farming and real estate sponsored by Ka‘anapali Development Company (formerly Amfac, one of Hawai‘i’s “Big Five” corporations). Private homeowners enjoy the rural lifestyle and tax benefits of agricultural zoning, while leaving the actual farming to someone else. They build a home on a predetermined acre within a five-acre lot; the remaining acreage functions as one large farm contracted out to MauiGrown Coffee, Inc. The developer picks up the tab for production costs, such as fertilizing and field maintenance. Trees are planted in hedge-style rows that can accommodate the passage of a mechanical picker, significantly reducing labor costs.

“This was the only way to do it without deep pockets,” says Falconer. “It’s another way of subsidizing agriculture—by people who want to live on the property.”

Last year MauiGrown, Inc., harvested 75,000 pounds of coffee, resulting in a gross income of just under a half million  dollars. This year’s projected harvest is 100,000  pounds.

Falconer’s ace in the fields is Moka, a rare coffee he collected in Brazil back in the ‘80s. Originally from ancient Ethiopia, the 1,000-year-old variety has since gone extinct elsewhere. It produces a small, round bean renowned for its full body and exotic, chocolaty flavor. In the past, Moka has received international accolades—even outperforming Kona coffees in taste tests. Coffee aficionados worldwide are clamoring to try the latest crop—currently retailing for upwards of $25 a pound.“Moka is charming,” says Matichyn. “Everyone likes the mystique, the story.”

From Bean to Cup

Falconer isn’t the only entrepreneur who sees his future in a coffee cup. A trio of investors recently purchased the Maui Tropical Plantation in Waikapu, where they’re brewing up a coffee business of their own. The new owners also acquired Coffees of Hawai‘i on Moloka‘i and plan to maximize agri-tourism opportunities at both farms.

“We’ll be promoting coffee in a big way, all the way from bean to cup,” says project manager Avery Chumbley. Customers can view the inner workings of the coffee farm, buy fresh-roasted blends, and experience “cupping,” an exercise in coffee taste-testing usually reserved for experts. The Waikapu plantation’s pineapple tours have been replaced with mule-drawn wagon rides around 200 acres of newly planted coffee trees. When the trees mature in another four years, their red and yellow Catuai beans will be sold under the company’s “Friendly Isles” label. In the meantime, coffee is supplied in part by MauiGrown Coffee, Inc.

Although Friendly Isles and MauiGrown coffee will be bolstered by tourism and real estate respectively, success is far from guaranteed. All farms are subject to the whims of the weather, which may bless them with too much or not enough rain. Some skeptics argue that regardless, great coffee can’t be grown at the low elevation of the two new farms; others are wary of machine-harvested beans. Moka, in particular, is a fickle crop; trees demand frequent pruning and sometimes go without fruiting for a year.

Falconer is undeterred. “In the beginning it’ll be hard and a lot of work,” he says. “But at the end of the day it’s a great opportunity.” He calls his venture “a Cinderella story in ag.  It’s my dream.”

Can Maui coffee contend with Kona? Taste for yourself: stop by the MauiGrown, Inc.’s headquarters in the renovated Pioneer Company store, where you can sip 1,000-year-old coffee and toast to the future of farming on Maui.