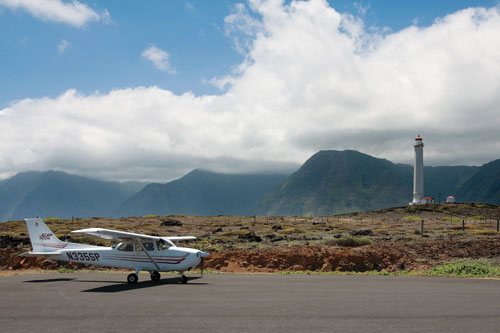 “Learn to Fly Here.” The sign nailed to the tin-roofed hangar announces Maui Aviators, on the far edge of Kahului Airport, just a thousand yards shy of the Pacific Ocean.

Since humans could walk, they’ve dreamt of flying. Everyone from Leonardo da Vinci to Amelia Earhart sought to shed gravity’s fetters and launch into the airy region of birds and clouds. I’ve come to this far-flung pilots’ outpost for my first flight lesson, which happens to include a spectacular coastal tour of West Maui and Moloka‘i. A security guard sees me hail from the parking lot, unlocks the gate, and ushers me onto the hallowed tarmac. My feet feel an inch off the ground already.

I join Jon Muralt in the shade of the hangar. The sun-tanned owner of Maui Aviators, the island’s sole flight school, has been helping novice barnstormers fledge for thirty years. “Maui is a great place to learn to fly,” he says. Not only is the weather ideal year-round, but student pilots benefit from practicing maneuvers in the strong crosswinds that roar through the central valley. “We’re pretty easygoing, too,” Muralt adds with a laugh.

He introduces my instructor for the day, a youthful blonde fellow with the requisite pilot’s crew cut. Joe Anslover left a law-enforcement career in Phoenix, Arizona, two years ago to pursue his dream of teaching others to fly on Maui—a good move, judging by his cheerful aplomb. We survey the chart of where we’ll be flying: around the northwest coast of Maui, across the Pailolo Channel to tiny Kalaupapa Peninsula on Moloka‘i. We’ll touch down briefly and head back.

Without further ado, we walk out to the fleet of tiny planes. Bouncing slightly in the wind, with wings tethered to the tarmac, they look like the anxious mounts of some fantastical army. We select our steed: a 172 Cessna Skyhawk with racing stripes. Anslover tells me we’ll be flying 120 miles per hour. “Phooey,” I jest. “I’ve driven cars that fast!” The ex-policeman arches his eyebrows.

Anslover leads me through an exhaustive series of checks, inspecting the plane from every angle. I drain a capful of fuel from each wing, to ensure that water condensation hasn’t contaminated the tanks. Inside the cockpit I test gauges. The myriad dials, switches, and numeric displays baffle me, but I determine to memorize what I can and let Anslover handle the rest. The seasoned pilot claims that flying is a cinch once you’ve established that your equipment will perform.

It’s time: I strap on my headset and seatbelt and switch on the engine.

Flying might be easy, but taxiing is hard—completely counterintuitive. My feet don’t comprehend that they’re supposed to brake and steer. My arms agonize with nothing to do; the yoke (the plane’s equivalent to a steering wheel) doesn’t activate until we’re in the air. We bump down the runway, careening left and right, nearly wandering into the grass after I spot a migratory bird. Whoops. Back on track, I conjure my best radio voice and alert the control tower that November 533 Sierra Papa is ready for take off. For better or worse, we get clearance.

“Full throttle,” says Anslover. The tiny plane erupts in noise. We’re suddenly racing toward the end of the runway—and a rocky beach—when Anslover tells me to pull back on the yoke. I do. The nose lifts: we’re airborne! 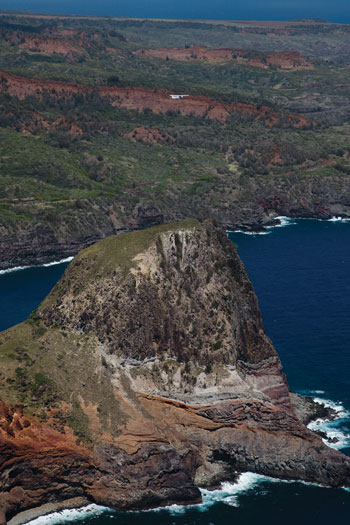 My bravado disappears. I shriek most unladylike into my headset: “I don’t know what I’m doing!” The plane lurches to the left—along with my nerves—then straightens out. Anslover, the picture of calm, smiles. “You’re doing great.” I notice his hands resting in his lap. Huh. This must not be an emergency.

I relax into my seat and absorb the scenery. The West Maui coastline unfolds beneath us like a vast tapestry. We glide over Waiehu Golf Course. Fawn-brown hillsides studded with windblown shrubs tumble into the sea. Near the northwest tip of Maui, Kahakuloa’s 636-foot rocky promontory rises from the water like the head of a curious turtle.

Finally able to steer with my hands, I clench the yoke for a measure of control, then let go. Nothing happens. Anslover tells me the plane is stable enough to right itself if I send it into a spiral. Hmm. I prefer to take his word on that.

We leave Maui behind to soar above the deep lapis-blue Pacific. I fasten my attention to the altimeter, one of the few gauges I understand, and concentrate on holding the plane between 1,200- and 1,500-foot elevation. Yikes! Clouds ahead. What now? Anslover directs me below them.

Moloka‘i appears beneath us, a fairytale landscape of emerald green shrouded in mist. More than 400,000 years ago, a giant landslide shaved off half the island, leaving in its wake vertical walls rising up to 4,000 feet—the tallest sea cliffs in the world.

Waterfalls cleave the mountainside, ribbons of white unfurling down with untold force. Few humans have trespassed on these rain-forested ridges, though we’re cruising low enough to hunt the feral goats that scamper with impunity. White tropicbirds cruise along the green backdrop, trailing splendid long tail feathers. We spot a lone homestead, perched on a ridge overlooking Halawa Valley. Anslover says a single Hawaiian mom raised her sons there, in utter isolation, and sent all four to university.

Picturesque islets dot the coastline: sanctuaries for nesting tropicbirds, noddies, petrels, and boobies. Tiny Huelo sticks like a thumb out of the sea, sporting a fringe of loulu, exceedingly rare Hawaiian palms.

Kalaupapa Peninsula juts from the base of the mountains. Well after that monumental landslide, about 230,000 years ago, a new volcanic eruption created this five-square-mile afterthought—a place of exquisite, haunting beauty. Separated from the rest of the island by vertical cliffs, Kalaupapa is reachable by boat, plane, and mule. Once the lonely exile of Hawaiians diagnosed with Hansen’s disease, or leprosy, it’s now a National Historic Park accessible only with prior permission.

Kalaupapa Airport is little more than a seaside shack and airstrip. During winter months, pilots have to time takeoffs with the surf, lest they get drenched on their way out. Luckily, that’s not an issue today.

I line the plane up with the slender airstrip and reduce speed. Anslover tells me to lift the nose of the plane a touch as we land. Uh, how? Ah yes, by pulling on the yoke. Before I can overcomplicate things, the wheels make contact with terra firma. Stepping from the plane, I’m elated. Jubilant. Alone on the empty runway, I feel like an explorer. Gusts of salty air whip my hair from my face.

On our return flight, Anslover challenges me. “Let’s see what this plane can do,” he says. “Turn it hard right.”

I nudge the yoke to the right.

Okay. I yank it all the way. Whooohooo! As the right wing drops out of my sight, I spot a stunning waterfall. Wow. Butterflies rise in my belly, then vanish. This is freedom.

I agree with Amelia Earhart, who said, “The lure of flying is the lure of beauty.” How marvelous the aviation pioneer must’ve felt, puddle-jumping across the globe in her little Lockheed! And what about those daring WWII pilots, who sped across the Pacific on so many dangerous missions?

Anslover interrupts my reverie, pointing calmly to the vertical speed gauge, which measures our rate of climb, or in this case, descent. It’s rather steep. “So, right now we’re engaged in an acrobatic maneuver,” he says. In other words, we’re nose-diving. I pull up on the yoke. Whew. We settle into a gentle descent. As we approach Kahului, the famous crosswinds don’t offer much of a fight.

Maui Tower crackles across the airwaves to inform us that a jet airliner is barreling in behind us, so could we hurry up? I gape at Anslover, who helps me land smoothly and speedily.

Shot through with excitement, I climb from the plane and dance around it. For a brief time I broke gravity’s hold. I transported myself to a completely different island and back. How miraculous! It’s easy to see how this feeling becomes an addiction, an irrepressible urge to explore the limits of human experience.

I thank Anslover for the lesson. He smiles, filling out the first entry in my logbook. Just thirty-nine more hours airborne and I can earn wings of my own.

The Cessna seats four, and you can split the fee for an economical way to explore the Islands.

Book a flight during winter and watch whales from above.

Maui Aviators is a certified Cessna Flight Center. Log 40-70 hours in the air (with and without an instructor) and complete the required exams to earn your pilot’s certificate.

Licensed pilots can rent planes after completing a checkout flight.