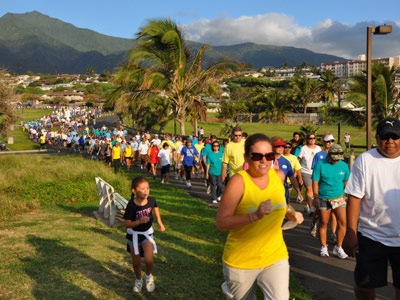 Across the Islands every May, folks by the thousands don sneakers and team t-shirts to take part in the Visitor Industry Charity Walk. Most have day (or night) jobs in Hawaii’s hotels and resorts, but the walk also brings out hundreds of people who work for or are clients of a host of community nonprofits.

This is no mere marathon. Sponsored by the Hawaii Hotel & Lodging Association, the Charity Walk is both the culmination and celebration of a year’s worth of fundraising–millions of dollars that stay right here in the Islands, helping people in need.

And nobody does it better than Maui. For twenty-four of the walk’s thirty-two years, Maui participants have raised more per capita than those of any other island. Three times more, says Carol Reimann, executive director of the Maui Hotel & Lodging Association. “Oahu has 6,000 walkers who raise an average $46 each. Maui has 2,000 walkers who each raise an average $156. This year, the average is $234.

For the past two years, Maui has raised more than Oahu, total.

Since kicking off in 1980, Maui’s Charity Walk has generated  $6 million-plus for nonprofits throughout the county, nearly half a million dollars last year alone. This year Reimann hopes to break the half-million mark–monies that will benefit seventy nonprofit agencies and “touch many lives.”

Of course, a little good-natured competition never hurts. Hotels and other Maui businesses donate spa visits, dining certificates, resort stays and other prizes for top fundraisers in various categories. Larger venues like the Grand Wailea and the Hyatt Regency Maui have a long-standing, fierce but friendly rivalry in the business category, while prizes for properties raising the most per capita give smaller hotels a chance to shine.

“The prizes are stellar,” says Reimann, then laughs, recalling how the Maui Humane Society participated last year. “Jocelyn Bouchard, the executive director, gave an “invisible dog” leash to everyone who raised more than $100 for the Humane Society.” A number of those invisible dogs participated in the walk, even stopping at the aid stations for water.

Each year, a committee of industry and community volunteers allocates the monies raised through the Charity Walk to participating nonprofits. “We set some funds aside for year-round giving,” Reimann says, “and every Christmas we give away 25,000 pounds of rice–5,000 pounds each on Lanai and Molokai. The rest goes to the Maui Food Bank and Feed My Sheep.”

The 5k walk itself takes participants through downtown Kahului, beginning and ending at the War Memorial soccer field. Along the way, business-sponsored aid stations provide the walkers with beverages, snacks and giveaways. Back at the soccer field, everyone is invited inside an enormous tent for awards presentations, refreshments donated by the hotels, and live entertainment—in 2012, comedian Frank DeLima, tropical jazz group Kulewa and local hula halau. There’s a keiki tent with face painting and balloons, health screenings by Maui Memorial Medical Center staff, and fitness activities for the whole family.

Carol Reimann admits to getting a bit teary-eyed over the number of people who participate. “I always have some anxiety, but when I see all the folks show up in the morning, it’s completely worth it. It’s like we threw a party, and everyone came.”

Age Is Just a Number 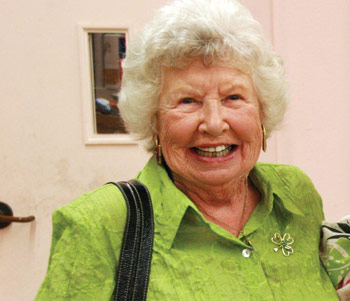 Eight-seven-year-old Dottie Hughes of Kihei grew up during the Great Depression and remembers all too well what it was like to not have enough food on the table. “Back then there was no government assistance, only a soup kitchen,” she recalls. “People had to stand on corners and beg for food.”

Today Hughes raises funds for Hale Kau Kau (House of Meals), a program at Saint Theresa Church in Kihei that serves a free, hot meal on site every day to men, women, and children who would otherwise go hungry; and delivers free evening meals to the homebound.

“Dottie brought in more funds last year for the Charity Walk than anyone else on our team,” says Marie Thomas, development director for Hale Kau Kau. “She raised more than $1,300 on her own, despite a recent stroke. With her leadership we collected more donations than ever before. Dottie is an inspiration to all of us.”

What has your boss done lately to motivate you? Matt Bailey, managing director of the Grand Wailea Resort & Spa, issued a unique challenge last year to inspire his employees to meet the property’s fund-raising goal for the Charity Walk. Succeed, and he would have his head shaved publicly—right smack in the middle of the hotel’s opulent lobby. 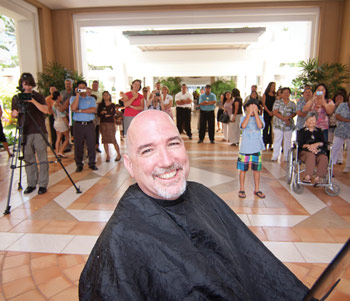 “There’s a strong but friendly rivalry among Maui hotels to be the top fundraiser,” says Bailey. “Last year we set a very high goal of $32,000 to make sure we came out on top. We were about four weeks away from the walk and languishing at around $9,000, so I told everyone ‘it’s crunch time.’ I promised my employees if we met our goal I’d have my head shaved.”

Bailey says his employees were already on a roll, but the challenge focused their attention and “gave all of us a reason to work together. We’re the largest private employer in Maui County, so we feel a big responsibility to give back to our community.”

Bailey’s challenge worked. The Grand Wailea came out on top, raising more than $50,000–a new state record. And Bailey had his head shaved by spa hairstylist Jeanene Sebstad in front of about a hundred employees and other fans.

We’ll have to wait to find out what Bailey did this year to motivate his employees. “I’ve kept my head shaved, so I can’t pull that stunt again,” he says. 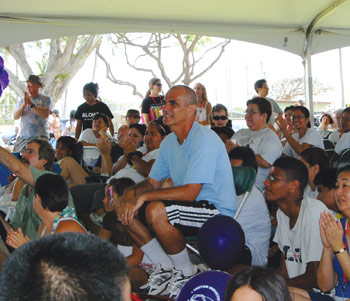 For the clients of Ka Lima O Maui, a nonprofit agency that offers work skills, training and support to developmentally disabled adults, the Visitor Industry Charity Walk is a chance to “let it all loose.”

“Our clients are delighted by the entertainment,” says Chantal Ratte, executive director of Ka Lima. “They’re right up in front, singing along and dancing.”

Nobody enjoys the Charity Walk’s festivities more than Eugene Perreira. “Eugene is in his fifties, but he’s very young at heart,” says Ratte. “We call him ‘Mr. Aloha.’ He grabs the microphone any chance he gets.” 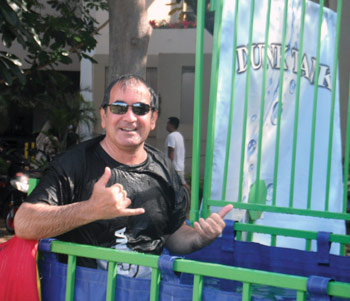 The employees at the Hyatt Regency Resort & Spa are no slouches at fundraising. Last year they came in second in the Charity Walk with an impressive $32,930.

“We raise funds throughout the year,” says General Manager Michael Jokovich. While Hyatt employee pride may have taken a hit last year by their second-place finish in the hotel property category, they’ve come back swinging. “A portion of the proceeds from our Japengo restaurant’s one-year anniversary party this past January benefits this year’s Charity Walk,” Jokovich says.

Hyatt staff, from the top down, have other clever ways of raising funds. The Human Resources Department purchases Komoda Bakery’s famed butter rolls and sells them to hotel employees for a profit, and members of the executive committee wash employee cars for a fee of $7 to $10, depending upon the size of the vehicle. Also popular is the periodic “dunk your boss” event ($3 for one ball, $5 for two). “I’m an especially popular target,” Jokovich says ruefully.

“During the recent economic downturn, it has been more important than ever to give back to our community,” he adds. “We never know when a crisis will affect one of us, or one of our family members. We truly appreciate the value of charities. 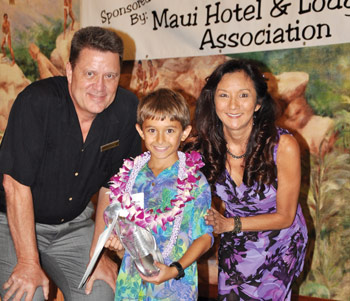 After the fundraising totals are tallied, the folks behind the Charity Walk present awards to the properties and individuals who have raised the most money. They also recognize one person for being particularly inspirational. Mo Maurer, founder of Hawaii Canines for Independence, nominated nine-year-old Declan Levin of Wailuku for the 2011 Charity Walk’s Inspiration Award, and he won.

Declan has been raising funds for HCI, which provides specially trained dogs for people with disabilities, since he was four. Rather than receive birthday presents, Declan asks family and friends to donate to the nonprofit organization. Declan is a popular fellow–he sends letters to about 100 people, and last year he raised more than $700 for the Charity Walk, which was matched dollar for dollar by the hotel properties.

“Every year Declan brings his donations to our office with a huge smile on his face,” Maurer says. “He is so proud to contribute to our organization and truly loves helping others.”

Declan’s own inspiration came when he met Michael, an HCI client who was paralyzed after falling off a horse, and Michael’s service dog, Archie. “I want to help people like Michael have the opportunity for more freedom in their lives,” says Declan.

Someone has to tally up the hundreds of donations for the Visitor Industry Charity Walk. “Each year, we ask that entities turn in their funds the Thursday before the event to be eligible for the fundraising competitions,” says Carol Reimann, executive director of the Maui Hotel & Lodging Association.

“We partner with First Hawaiian Bank, identifying drop-off sites at branch locations around Maui,” Reimann says. The day before the event, retired bank employees Clarita Mitchell, Kathy Oura, and Ray Endo volunteer their time to verify and process all of the checks and cash collected. It often takes them well into the wee hours of the night.

“Clarita, Kathy, and Ray await our call each year, and never say, ‘I’m too busy,’” says Dean Duque, vice president and branch manager of First Hawaiian’s Lahaina branch. “They look forward to their role in supporting the Charity Walk. They may not be able to do the walk or give a monetary donation, so they help out by volunteering their time.”

With donations ranging from $5 to $500, Mitchell, Oura and Endo process upwards of 2,000 checks. And, since everything in banking is done under what’s known as “dual custody,” each entity’s donations must be verified not once, but twice. “If there’s a discrepancy, we keep at it until it’s correct,” says Duque.