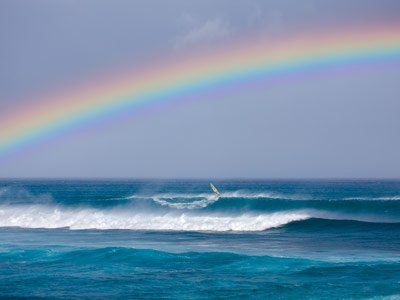 It’s not as though Hawaii is the only place with rainbows. All it takes to conjure one is falling water, sunlight, and the right spot for observing. Why, then, are rainbows at once so common and so spectacular here that they appear on our license plates and in our songs, in the names of our sports teams and the viewfinders of awestruck visitors who abandon their cars by the side of the road to photograph those brilliant bands of light?

The luminous arcs that span Hawaiian skies owe much to the Islands themselves: the height of our mountains, our distance from the equator and from just about anyplace else. Air currents, moving across the Pacific, gather moisture like a blessing or bouquet, and carry it on the trade winds till a mountain — Mauna Loa, Haleakala, Waialeale — blocks the way, forcing the moist air up into cooler elevations and forming clouds. There’s even a word for it: orographic, “an effect induced by the presence of mountains.” As rain falls, each drop separates its portion of sunlight into red, orange, yellow, green, blue, violet. Then the air moves on, warming up over the valleys and leaving the rain behind.

And that’s the key. To see a rainbow, says Michael Nassir, an instructor of physics and astronomy at the University of Hawaii’s Manoa campus, “you need a big curtain of rain in the air, and for you to be between that curtain and the sun. On the mainland, storms are huge, so it’s rare to be on the boundary. You’re usually inside the storm.” In Hawaii, where showers linger over the mountains, “you’re often at the boundary.”

There’s another difference to Hawaii’s rainbows, says Tom Birchard, a senior forecaster with the National Weather Service in Honolulu: salt.

Raindrops need a microscopic particle to form around. Scientists give that mote a grandiloquent name: “cloud condensation nucleus.” On the mainland, says Birchard, dust, car exhaust and other air pollutants serve as nuclei. “In Hawaii, the most isolated landmass in the world, there aren’t a lot of pollutants in the air. Our primary cloud condensation nuclei are salt particles lifted off the ocean’s surface.”

How falling water creates rainbows is simple physics — though if, like me, you consider “simple physics” an oxymoron, you might want to call it magic. Sunlight contains all the colors of the rainbow; when it penetrates a raindrop, it bends. Each color in that ray of light exists on a different wavelength, and bends to a different degree, so that when the light leaves the raindrop, the colors are all fanned out.

Any raindrop can perform this prism effect. Ours excel at variations on a theme.

Sometimes light bends and bounces off the inside of the raindrop not once, but twice. The result is a double rainbow. Because the second bounce reverses the light waves, the colors in the outer, or secondary, rainbow are in opposite order of those in the inner, or primary, bow. 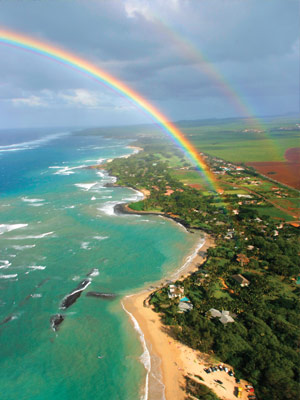 Rainbows happen at night the same as they do by day, except that the light from the sun first reflects off the moon.

“We see them as white,” says Nassir, “but moonbows have color. It’s just that it’s faint. The cones in the eye that detect red, blue and green don’t work in low light, so the eye’s ability to detect colors drops off.”

To reflect enough sunlight for a night rainbow, the moon needs to be full, or nearly so.

Factor that small window in the lunar cycle with the rest of the conditions any rainbow requires, and you begin to grasp why moonbows are so seldom seen. And why, if you’re going to see one at all, it will be in a place like Hawaii, where rainbows more often occur.

Rainbows All about You

If you’ve ever looked out of a plane and seen its shadow on the clouds, encircled by a rainbow, you’ve witnessed a Brocken spectre. The “spectre” is the shadow; the rainbow ring around it is the “glory.” On rare occasions, you can see the same thing if you stand at the edge of Haleakala Crater when it’s filled with clouds. If the sun is behind you, it will cast your shadow on the clouds and surround it with a rainbow. David Lynch and William Livingston, in their book Color and Light in Nature, note that one of the best photographs ever taken of a Brocken spectre was shot in 1968 at Haleakala’s rim. “Five glory rings could be seen on the original transparency.”

In fact, every rainbow is a circle. It just looks like a bow because the ground blocks your view of the bottom. Climb high enough, and you’d see the whole, lovely ring. While you’re up there, draw a line from the sun (which will be behind you), and run it perpendicularly through the exact center of the rainbow circle, a spot that’s called the anti-solar point. The line will go right through the middle of your head. I told you this was magic.

Well, that — and the fact that a rainbow doesn’t exist in any specific space. It’s an optical choreography between you and the sun and a particular group of raindrops. If you and I stand side by side, we will each see a different rainbow, its colors reflecting from a different group of drops.

Do rainbows have any practical use? “Good question,” says Nassir. “They’re similar to what we do in physics when we run light through a prism and split it into its component colors. By looking at the presence and absence of wavelengths in the spectrum, we can identify a compound at a crime scene, or determine the composition of a star.” 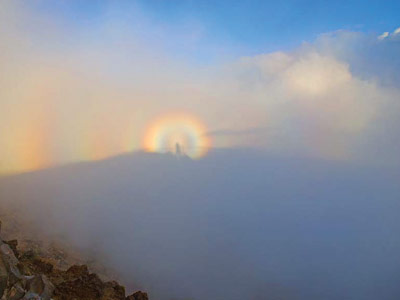 Kimokeo Kapahulehua stands at the edge of Wailea Beach, dressed in traditional garb. Across the water, dark clouds persist above Kahoolawe, though the sun is finally up. Soon two-dozen canoes will round the point and await Kapahulehua’s signal to approach, the ceremonial start to a day of workshops for the Hawaiian Chamber of Commerce. As he raises his conch to welcome the canoes, a rainbow appears and brightens to vivid intensity. It will linger until all twenty-four crews pull their vessels up onto the sand.

Cecilia Fernandez Romero and I were at the beach that day in 2010. The photo she captured of that moment became the cover of our November-December issue. Kahu Lyons Naone was there, as well. Nearly two years later, he reminds me of that morning. “It was not a good day for rainbows,” he says, “but the rainbow appeared. That was a sign from the ancestors that what we were doing was proper.”

Hawaiians have mixed views about rainbows. In such respected source books as Olelo Noeau and Nana I Ke Kumu, rainbows sometimes foretell misfortune, presage a death, or announce that a chief is journeying, watched over by the gods.

“It depends on when it happens,” says Naone, “and what the person is looking for. Many times the rainbow is a hoailona, or omen, that the ancestors or gods favor what you did or plan to do.”

Naone’s Hawaiian grandmother trained him in traditional practices almost from the time he learned to walk. Today he teaches Hawaiian healing around the world. In Austria, a men’s group asked him to design a tattoo to represent their commitment as spiritual warriors — with a rainbow to show the connection between indigenous and nonindigenous cultures.

“Physicists talk about the scientific reasons Hawaii is full of rainbows,” says Naone. “We see rainbows as a symbol; we are a bridge to the rest of the world for spirituality and healing.”