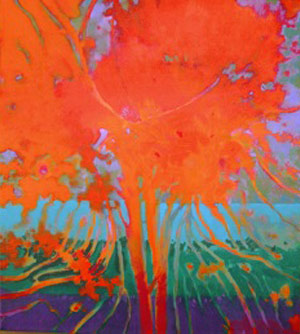 Beyond the windows of the studio in Douglas Chun’s Kula home, Nature is reveling in silent fecundity. Coffee, citrus and pepper trees, jacarandas and a Chinese magnolia preside over clumps of night-blooming jasmine, agapanthus, tree ferns and roses. Out there, gardener Chun maintains a civilized order over all that floral exuberance. In here, artist Chun celebrates it with canvas and color.

He nods toward a pair of paintings exploding with turquoise, green and red, and says Germination I and II pay homage to nature’s creative force. “I wanted to capture the miracle of life,” he says, “the seed — so simple — germinating into something so complex that no human being can create it.”

As he recounts the arc of his life and artistic career, it becomes clear that, for Douglas Chun, nature is at once inspiration, refuge and metaphor.

A native of Guangzhou whose family fled China’s Maoist revolution, Douglas pursued fine art at the San Francisco Art Institute, but when his first child came along, his career path took an abrupt detour.

“I needed a job, and there weren’t any want ads for fine artists,” he says with a slight smile. “By chance, I saw an opening for an architectural illustrator.”

He got the position, and for nearly four decades, fine art took a back seat, though he continued to pursue it in his free time. Finally, at the stage of life when most people consider retiring, Douglas gave up his day job and devoted himself to painting.

By the time he and wife Janet arrived on Maui, some twenty years ago, Douglas had become an accomplished watercolorist. His work hung in galleries along the West Coast, was in public and private collections throughout the U.S. and abroad, and quickly won fans and collectors on Maui.

Despite that success, Douglas was restless. “I had always wanted to do abstraction; I explored it early in life. It’s much easier to market representational work,” he adds candidly, “but I find it difficult to express my emotions through representational art. When you paint a landscape, what you see is what you get: sunrise or high noon, windy or rainy day.” 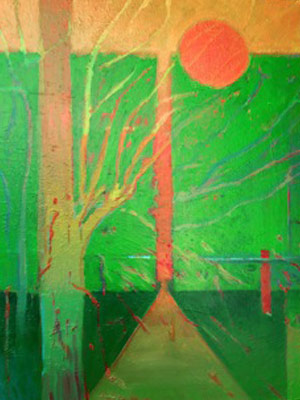 For Douglas, abstraction not only offers more avenues for expressing emotion, it invites greater involvement from viewers, encouraging them to bring their own interpretations to the act of seeing.

In the late 1990s, Douglas began to experiment with abstracts, moving between that style and representational painting.

Then, in 2005, he stopped painting altogether.

“I got sidetracked into Buddhism and calligraphy,” he says.

“I grew up during a turbulent time in China. I was brought up to believe you have to produce something. That old pattern was hard to break away from.

“The path is not always straight. Sometimes you go in and out; sometimes you fall off the cliff.”

“Practicing calligraphy, and studying the sutras [Buddhist scripture] taught me that it’s okay not to do anything, that you don’t have to take things so seriously. That’s when I began to spend my days in the garden. I would do my calligraphy in the morning, and garden the rest of the time. I did calligraphy every day for five years; it was very meditative.

“Chinese calligraphy is a very abstract form of expression, like hieroglyphics or pictographs,” Douglas adds. “The origin of the word ‘bird’ was a picture of a bird; over four- or five-thousand years of evolution, it got simplified.”

Eventually, calligraphy drew Douglas back to painting. At the age of seventy-nine, he began to paint the way he had always wanted. He switched to acrylic, a medium that allows him to work on a larger scale, and is more forgiving than watercolor.

“I begin with a basic concept,” he says, “but the painting may not end up the way I visualized it. It’s a process of search and discovery, sometimes search and destroy. With watercolor, I might go through five or six paintings to arrive at my concept. With acrylic, I can paint over. The path is not always straight. Sometimes you go in and out; sometimes you fall off the cliff.”

That willingness to start over, to remain enthusiastic and open to discovery long after you have mastered the technical skill, is an attribute Zen Buddhists call shoshin, “beginner’s mind.” To paraphrase Zen monk Shunryu Suzuki: the expert’s mind holds few possibilities; the beginner’s mind holds many.

“It’s interesting to watch someone with Doug’s skill with a brush,” says Richard Nelson, a Maui artist and educator who has used one of Chun’s paintings to teach other artists concepts of volume, space and atmosphere. “He knows perspective, how to render a form in 3D space — a skill that seems lacking today. Doug had for so many years been in architectural rendering. That fenced him in. It’s not an easy transition from there to fine art; it’s almost easier for someone with an empty plate to do.”

Douglas views this accomplishment with quiet aplomb, crediting a long life for helping him become more confident in expressing his emotions. “I’m more mature,” he says, “not technically, but as a person.

“Age brings greater patience,” he adds with a grin. “I don’t tear up paintings anymore.

“I’m painting what I always wanted to paint.”

Find more of Douglas Chun’s oeuvre at www.douglaschun.com, and meet the artist in person at his Kula studio during Maui Open Studios.