Halau O Kekuhi performing at the 2011 Merrie Monarch Hula Festival. This Hula was a dedication to traditional KAPA.

Whenever a storm rattles the trees on Maui, most island residents focus on battening down the hatches. Lei Ishikawa thinks of resin. Shortly after the gusts stop, she’ll venture out to a kukui grove and look for damaged limbs. Kukui trees produce a sticky resin in response to injuries. Ishikawa collects this fortuitous substance, and later applies it to her handmade Hawaiian kapa, or barkcloth, to “fix” her colorful natural dyes.

Kapa makers are crazy like that; they’ll brave storms, plunge knee-deep into mud, and grapple with fermented slime if it means a better product. Like their ancestors, modern kapa makers are studious observers of the natural world, intuitive chemists, and fine artists with no small dose of perfectionism. 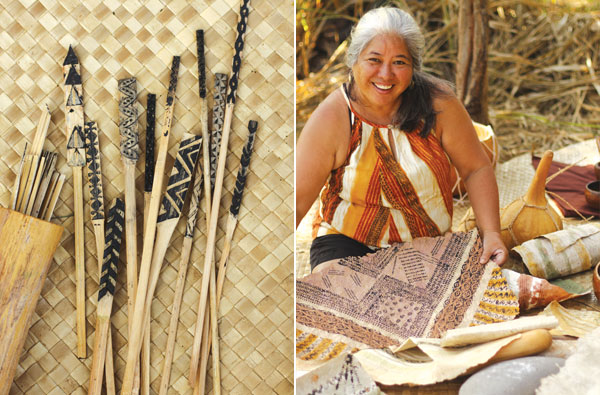 For centuries, fashioning beautiful, pliant cloth from plant material was a Hawaiian woman’s daily chore. The Islands echoed with the sound of carved kapa beaters knock-knock-knocking against anvils hewn from native woods. In between, wet strips of wauke took shape.

Wauke, or paper mulberry, is one of the few plants Polynesians brought to Hawai‘i in their voyaging canoes. Cloth made from its bark is ubiquitous throughout the Pacific — it’s called tapa in Tahiti and masi in Fiji — but the finest pieces came from ancient Hawai‘i, where the craft was elevated to high art. Hawaiians were the only ones to ferment wauke before pounding it, a slimy, stinky process that nevertheless produces a soft, luxuriant material. The Hawaiians’ handiwork is further distinguished by decorative watermarks beaten into the barkcloth, and by bold natural pigments. 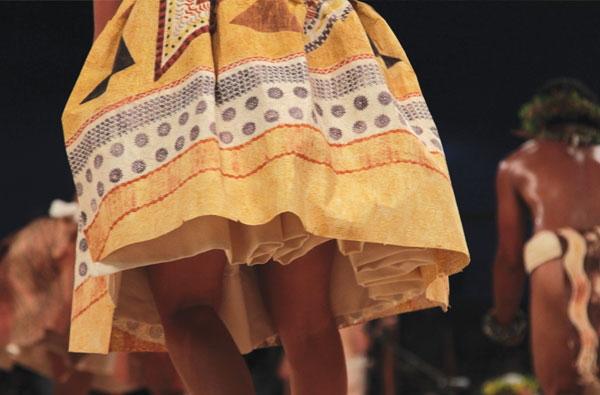 Kapa was once the literal and metaphoric fabric of Hawai‘i: it swaddled newborns, softened beds, clothed warriors and dancers, and accompanied elders’ bones into the grave. Like so much of Hawaiian culture, kapa had a spiritual dimension; it held the mana (life force) of the plants it was made from and the persons who made and wore it.

But after Westerners arrived in these islands, European trends supplanted native traditions. Even Kamehameha the Great shed his kapa loincloth for cotton trousers. By 1870, the native Hawaiian historian Samuel Kamakau reported that, “all are dead who knew how to make coverings . . . and adornments . . . that made the wearers look dignified and proud and distinguished.”

A century passed before kapa came back into fashion. During the Hawaiian cultural renaissance of the 1970s, a few dedicated (some might say obsessed) individuals began breathing life into the lost art.

This second wave of kapa makers has had to figure out every step anew, aided only by a few clues hidden in mele (songs), Hawaiian-language newspapers, and museum relics. For modern crafters, the Bishop Museum’s collection of centuries-old kapa is confounding: How did the ancients construct such delicate, lacy barkcloth? Why haven’t the dyes dimmed over time? Which plants produced such vivid colors?

Marie McDonald has dedicated decades of her life to solving these puzzles. Through trial and error, she grew her own wauke and made her own tools: the round hohoa used to loosen the bark’s fibers before fermentation, the square-sided i‘e kuku that impresses complex watermarks into the pounded cloth, and the ʻohe kapala, delicate bamboo stamps that decorate the final creation. 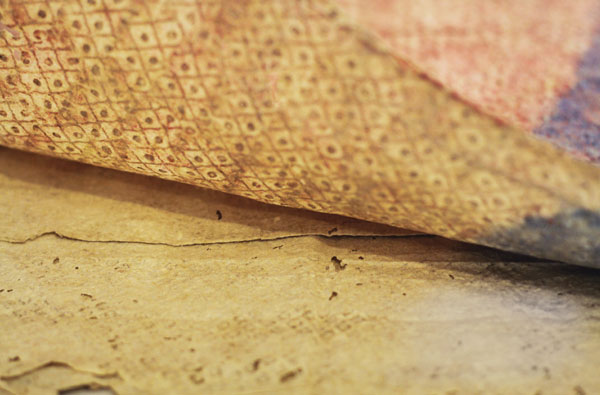 A single piece of kapa can take months to make. It’s backbreaking work that requires a steady hand and infinite patience. “I have learned to appreciate the women that came before me,” says McDonald. “They had so much fortitude.”

Though well into her eighties, McDonald continues to expand the modern kapa-making frontier. In 2011, she collaborated with several other artists to craft authentic costumes for the acclaimed hula troupe Halau O Kekuhi to wear during the Merrie Monarch Festival. When the dancers stepped into the spotlight dressed in barkcloth malo (loincloths), kihei (capes) and pa‘u (skirts), it was the first time in over a century that hula and kapa were reunited on stage.

The challenge of creating functional garments opened up a new line of inquiry for the kapa makers. It’s one thing to sleep on or be buried in barkcloth, quite another to sweat, strain, and still look handsome in it. The fabricators needed to ensure that their inks wouldn’t smear and that the finished outfits moved as gracefully as the dancers wearing them. “I found I had to make the kapa thinner and softer,” says McDonald. “When we first did the Merrie Monarch, we all made discoveries. That’s what I hoped would happen.”

The experience so energized the kapa makers and the halau, they decided to replicate it on the other islands. McDonald approached the Maui Arts & Cultural Center with the proposal of a hula performance showcasing the creative arts of ancient Hawai‘i. The Center agreed, and offered the group a two-month exhibit in the Schaefer International Gallery. From January 21 through March 9, Mohala Hou Ke Kapa: Kapa Blossoms Anew will feature new work by some two-dozen kapa makers, plus historic artifacts from the Bailey House Museum and private collections. 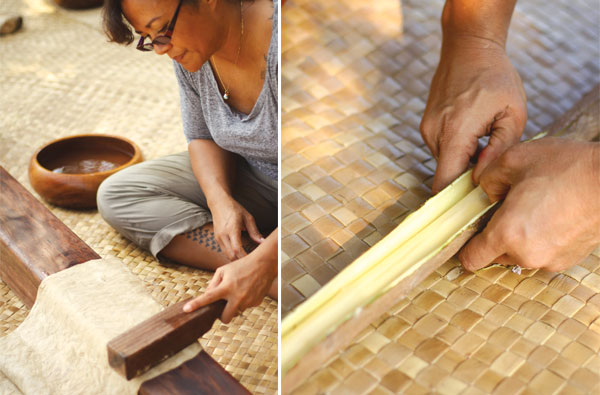 The show has now been several years in the making. During that time, the few dozen kapa makers scattered across the state have grown into a mutually supportive hui (alliance). In October of 2012, they gathered on Maui for a three-day retreat at the Bailey House Museum. They shared techniques born from their individual experiments in botany and chemistry: precisely how many drops of oil turn ‘a‘ali‘i soot into smudge-proof ink; which roots and resins produce the longest-lasting dyes.

The artists participating in Mohala Hou Ke Kapa each agreed to produce three new kapa pieces for the exhibit: a traditional and a contemporary work, and a garment to be given to the halau. Those who’ve chosen to make pa‘u will likely have sore arms by the time they’re finished: the skirts historically measured twelve feet long and twenty-seven inches wide.

“Kapa is an art form that’s truly Hawaiian,” says McDonald. “It will grow, develop, and evolve. Even though it’s influenced by times past, the kapa produced today tells a story of our time.”

Much as they might have done a century or so ago, Lei Ishikawa and another kapa maker, U‘ilani Naho‘olewa, sit outside in Waiehu, surrounded by their handsome tools. Ishikawa shows Naho‘olewa how the kukui resin has imbued her kapa with a light metallic sheen. Ishikawa is a teacher by profession, Naho‘olewa a graphic designer. Both devote nearly every spare hour to perpetuating Hawai‘i’s native visual art.

A large pinao (dragonfly) darts behind the ladies into a grove of spindly wauke trees. Naho‘olewa snaps off a thin wauke branch, slices it lengthwise with a shark-tooth knife, and strips its bark off in a single piece. She’s making a modern ki‘i (totem) for the upcoming exhibit. She plans to carve kapa designs into a hefty ‘ohi‘a stump, and dress it in barkcloth.

The contemporary artist delights in the pursuit of her ancestors’ arcane knowledge. “I’m not just tinkering, but channeling,” says Naho‘olewa. “They must have been like us, looking at the vibrant coral reefs and thinking: how can I get that color in my next piece?”

Among the artisans who rediscovered the craft of kapa making, Marie Emilia Leilehua McDonald was a legend. She continued to expand contemporary knowledge of this ancient art well into her eighties, learning through trial and error to grow her own wauke, transform its bark into cloth and fashion the traditional tools with which she inscribed her designs.

“I have learned to appreciate the women who came before me,” she told author Shannon Wianecki in 2014. “They had so much fortitude.”

Marie was one of the kapa makers who introduced this traditional apparel to the 2011 Merrie Monarch Festival and helped coordinate the 2013 kapa exhibit at the Maui Arts & Cultural Center.

In 1992, the Buddhist temple Honpa Hongwanji Mission of Hawai‘i named her a Living Treasure. Recipients of this honor are chosen, in part, for their “significant contributions toward a more humane and fraternal society,” and for having shown “an ongoing striving for excellence and a high level of accomplishment.”

Marie McDonald passed away in 2019, but her many contributions live on. “Kapa is an art form that’s truly Hawaiian,” she once said. “It will grow, develop and evolve. Even though it’s influenced by times past, the kapa produced today tells a story of our time.”