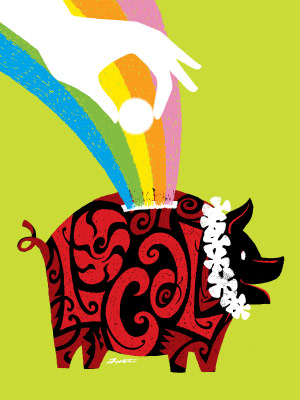 “Uncle Clay” Chang fulfilled a lifelong dream in 1996 when he bought Doe Fang, the tiny sweet shop he’d salivated over as a child. Packed with crack seed (pickled, sweetened fruits), the neighborhood institution had been tempting kids in ‘Ainahaina, O‘ahu, for over fifty years. Its new, wide-grinned proprietor loved talking story with customers big and small while dishing out treats. Uncle Clay wanted to expand and buy a shave-ice machine, but was struggling just to keep up with the rising costs of business. Doe Fang was in danger of disappearing, like so many beloved mom-and-pops.

Luckily, Uncle Clay’s nephew returned from college with a business degree and fresh ideas for financing. In 2010, Uncle Clay and Bronson Chang reached out to friends, family, classmates, and loyal customers, and raised $54,000. With it, they built a shiny new shop, Uncle Clay’s House of Pure Aloha; bought equipment; and developed a marketing campaign for further expansion. Their investors lucked out too: not only will they receive 2 percent of the company’s revenues over the next four years, they’re also invited to private tastings of new shave-ice flavors.

This sweet deal is an example of “locavesting,” a term coined by Amy Cortese in her book Locavesting: The Revolution in Local Investing and How to Profit from It. At the 2012 TEDxMaui conference, Cortese took the podium to explain how it works. She began by asking the question that first inspired her: “What would the world look like if we invested 50 percent of our investment dollars within fifty miles of where we live?”

Cortese suggests that many of our modern financial plagues can be ameliorated with even a small change in our investment habits. “If Americans shifted just 1 percent of their investments to locally owned companies,” she says, “more than $260 billion would be injected into the Main Street economy, without costing the government a dime.”

High unemployment, blighted downtowns, and rural decline can be replaced with thriving business districts, diversified economies, and healthy tax revenues. Hawai‘i, in particular, can move towards self-reliance. Not only can we keep our shave-ice stands, we can support local farms and renewable energy providers.

There are two sides to the typical investment coin: the entrepreneur, who gets much-needed capital to grow his or her business; and the investor, who earns interest or dividends for supplying that capital. Locavesting creates a third beneficiary: the community.

During her talk, Cortese singled out two Maui residents who are both on the cutting edge of the locavesting movement: David Fisher and James Frazier.

“It used to be that Wall Street raised money for companies,” says David Fisher. “Now it raises money for traders.”

Fisher is a community-minded economist with thirty years’ experience in small-business development. He’d like to see a new kind of stock exchange come to life: one that not only fattens investment portfolios, but also infuses the local economy with smart ventures that nourish their community. In 2010, he helped found the Friends of the Hawai‘i Local Exchange, a group researching the viability of a Hawai‘i-based stock exchange.

It won’t be the first.

In 1898, soon after the U.S. annexed Hawai‘i as a territory, business leaders formed the Honolulu Stock Exchange to raise capital for the Islands’ infrastructure. Hawai‘i traders funded railroads, telephone and electric companies, and sugar plantations. They even snapped up Japanese, Indonesian, and Filipino securities. Situated between East and West, the Honolulu exchange served as a nexus connecting investors and entrepreneurs across the Pacific. But by the 1970s, Hawai‘i’s big companies like Amfac, Castle & Cooke, and Hawaiian Electric had migrated to the dizzying world of Wall Street. Left with little to trade, the Honolulu Stock Exchange closed in 1976.

While there used to be scores of regional exchanges, less than a handful still exist. Communications technology and economies of scale have rendered them less viable. Meanwhile, smaller businesses, which are the true engines of local economies, have been squeezed out of the investment arena. They can’t afford the $1 million-plus in audits and fees required to list on the NYSE or NASDAQ. So when small businesses need capital to grow, they turn to banks, which are reluctant to lend after the recent credit crisis. Finally, businesses are forced to rely on credit cards and high-cost financing.

Fisher believes reviving a Hawai‘i exchange can address this problem. Giving entrepreneurs access to local investors can encourage development of new infrastructure, just as the Honolulu exchange once did. Hawai‘i is dangerously dependent on imported fuel and food. Fisher envisions a local exchange that raises capital for renewable energy and sustainable agriculture. Investors could finance a new dairy farm, for example. Milk cows won’t provide whopping returns, but Fisher says it’s a stable investment and something the community sorely needs.

The Friends of the Hawai‘i Local Exchange started by gathering the support of local regulators. They met with state legislators, who passed a resolution in 2011 to explore the feasibility of a local exchange. Their task force found that the idea was legally possible and offered recommendations and guidelines. In fall of 2012, the Friends began building the scaffolding of an exchange: acquiring the necessary licenses and researching online platforms to facilitate trading.

“Instead of a big brick building,” says Fisher, “we’ll have a website.”

But the community he hopes to foster will be face-to-face, not virtual. To that end, the Friends host venture forums where entrepreneurs give “under the hood” presentations of their companies. At these meet-and-greet events, investors can discover new ventures, entrepreneurs can get feedback on their business models, and regular folks can learn the ropes of investing. At the first forum on Maui, Michael Snyder of the Hawaiian Electric Vehicle Network and local farmer Vince Mina presented their ideas to an audience of forty-five, including investors, entrepreneurs, and professional service providers.

“The whole point of a community exchange,” says Fisher, “is to create a nurturing, transparent environment where people can meet who they’re investing in.” This kind of environment will generate robust, responsive businesses, he says. There are social impacts as well. In addition to talking about profits and revenues, stockholders can influence business practices, such as job creation and the relation of CEO pay to employee pay.

“It used to be that Wall Street raised money for companies. Now it raises money for traders.”

The U.S. Securities and Exchange Commission has strict rules governing how stocks and loans are advertised and sold. Unless companies go public, they can only sell securities to people with whom they have an existing relationship, or to accredited investors: individuals with a net worth exceeding $1 million. To start, the future Hawai‘i exchange’s transactions will be limited to such investors, with a registered broker-dealer supervising all activity. Once the exchange has proven itself, its members hope to engage a broader audience, using the SEC’s intrastate exemption: investors must be Hawai‘i residents, and most of the revenue from the business is generated in Hawai‘i.

Do locavesting options exist for non-millionaires? I turned to financial consultant James Frazier for more information. He helped launch the nation’s first Local Investment Opportunities Network (LION) in Port Townsend, Washington, and would like to start one here on Maui.

A LION is simply a network of people who meet to discuss business opportunities. At informal gatherings, potential partners get to know one another, ultimately qualifying for the existing-relationship exemption. The resulting investment deals aren’t mediated by broker-dealers; LION members must do their own due diligence. These transactions hark back to simpler days when a handshake constituted a deal.

“It requires a little more legwork by the investor, but the rewards are great,” says Frazier. “You can go by the business and check up on it. You can be creative. Some people get dividends in cheese or blueberries.”

Frazier has personally financed three ventures. He loaned money to a storyteller who produced a DVD and to a theatrical troupe that went on tour. In his experience, this kind of person-to-person lending builds strong relationships in the community and can be an optimal choice for both parties. By eliminating the middleman, borrowers get a lower rate on loans and investors get higher returns.

“There’s always risk,” he says. “Some local investments have run into trouble. The business owners ask to refinance, or restructure their payments. Each situation is different.” Since 2006, he’s witnessed forty-three deals. He has yet to see a default.

Frazier plans to launch the Local Investing Resource Center in April, an online tool that will help familiarize people with the ins and outs of locavesting. To raise funds for this project, he’s using a third investment route: “crowdfunding.”

Popularized by sites like Kickstarter, Indiegogo, and Kiva, crowdfunding allows entrepreneurs to raise money through small donations from many people. While LIONs and the future Hawai‘i exchange foster relationships between qualified investors and entrepreneurs during face-to-face meetings, crowdfunding transpires almost exclusively over the Internet. In the past, U.S. securities laws have preventing crowdfunding sites from offering equity. Instead, investors received rewards: original artwork or tickets to events, for example.

Uncle Clay’s House of Aloha raised money through the crowdfunding site ProFunder — among the first to experiment with offering equity. ProFunder was unfortunately ahead of its time. It closed, citing difficulty in navigating the regulatory hoops. But in April of 2012, President Obama signed into law the Jumpstart Our Business Startups (JOBS) Act. This legislation eases the restrictions hampering crowdfunding and other locavesting strategies. Amy Cortese was present at the Rose Garden for the historic occasion.

The investment landscape is changing. Hawai‘i’s mom-and-pops may soon find their place in your portfolio alongside multinationals. To learn more about locavesting in the Islands, visit hilocalexchange.org or sign up for James Frazier’s newsletter at info@local-investing.com.