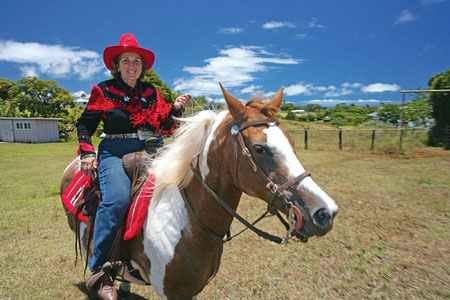 The living room of Rose Cambra Freitas’ Makawao home brims with four generations of family photos that cover her walls, and the trophies, buckles, artifacts, and trinkets that clutter her shelves. Right now, the living room is an obstacle course of silver lamé, tooled leather, and red-white-and-blue silk flowers. For the past 11 months, Rose has been crafting the Statue-of-Liberty costume she will wear when she rides her horse Glory in Makawao’s annual Fourth of July parade. Leaning against her handmade parade saddle, she drapes an expertly crunched sleeve against her shoulder and holds aloft the glitter-dipped section of curtain rod that forms her torch, beaming like a bride-to-be modeling her gown.

At 74, Rose Freitas is a woman whose life is as packed as her living room—miraculously tidy for something so barely contained.

She has a simple passion: horses, anything to do with them. And into one lifetime she’s squeezed as much of that passion as she could fit, and then some. 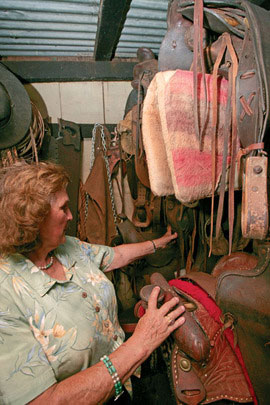 It was that unbridled enthusiasm for life that caught the notice of the National Cowgirl Museum and Hall of Fame, said museum curator Tricia Taylor Dixon. The organization selected Rose for the Hall of Fame in June, making her the first woman from Hawai‘i to receive the honor.

More than any exploits in the arena or out on the range, the museum looks for women showing the “cowgirl spirit,” celebrating the western traditions and independent ways of the cowgirl, Taylor Dixon says. After Rose’s induction in an October ceremony in Fort Worth, Texas, she will join the ranks of 181 other pioneering women, including Annie Oakley, Dale Evans, and Sacagawea.

Rose’s passion started when she was a girl, watching her father ride off on horseback to his job as a plantation luna (foreman). She and her brother begged for mounts of their own, and spent every moment they could riding the dusty streets of their Pu‘unene camp, with only empty flour sacks for saddles.

Since those small-kid days, the island’s never quite been big enough to contain Rose and her enthusiasm. After running out of horse shows to keep them interested, she and her daughter, Sharon, organized an alternative to the males-only roping clubs on Maui, founding the Maui All-Girls and Junior Boys and Girls Rodeo in 1974—blazing a trail for future generations of Maui girls that Taylor Dixon says especially impressed the Hall of Fame selection committee. 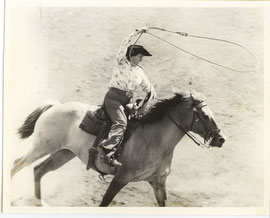 Rose won the first trophy for all-around cowgirl at the rodeo she founded, a feat that required her to win or place in nearly every event open to women, including steer undecorating, where riders race to pull a ribbon off a running steer, team roping, goat tying, breakaway roping, and barrel racing. If there’s a secret to her success in the arena, it must be her willingness to try anything and everything.

“I did it for fun,” she says. “I loved the horsemanship, the challenge. I loved my friends and my competitors, and enjoyed it to the fullest.”

Over the years she’s entered competitions ranging from rodeo to English jumping, until she had to have a special display case built to hold all her buckles and ribbons. But fast-paced barrel racing, where the winner can be decided by a tenth of a second, remained her favorite. (Barrel racing is a timed event in which horse and rider run in a certain pattern circling three barrels.)

“That’s my sport,” she says. “Just like some people love to sit down and smoke tobacco or drink beer, I love to barrel race.”

When she wasn’t in the arena, Rose was never happier than when she and her cowboy husband, Raymond, packed up their rifles for a family camping trip into Haleakala Crater, where they rode down Sliding Sands Trail, passing around her pewter flask of Crown Royal to keep warm, and hunted goats until their horses staggered home under the weight of the meat.

Clomping through her rosebush-planted backyard in blue jeans and red ruffled cowgirl shirt, one of her gleaming trophy buckles pressed against her middle, Rose stops to check on a pair of peeping chicks she’s boxed up in her tool shed. She found them cold and abandoned hours after they’d hatched; only the rise and fall of their shallow breaths showed they had a chance at life. That was enough for Rose, who raced them to her kitchen and dunked them in a dish of warm water until they revived.

Not that she needed any more chickens. She’s been trying to clean house ever since she took stock of the wild hens and roosters pecking around her yard and counted more than 80 birds. She rigged a trap—a bit of metal cage propped on an overturned bucket—and now spends what spare minutes she has lurking just inside the tool shed waiting to tug on the string and surprise a hen or two. She totes off her catch in burlap sacks.

“I’m giving them away to friends,” she explains.

Marching out to her barn, past a kiawe-post fence decorated with a steer’s skull, bird feeders dangling from its sun-bleached horns, Rose dodges the kittens skittering at her feet and calls her horses into the covered wash rack. They nose around, blowing on the back of her neck and sniffing for corn, as she begins the long, daily ritual of grooming, stirring up the familiar flurry of horse hair, dust, and dandruff. They stand fussily as she works them over one by one, starting at brushing their forelocks and finishing with a dab of ointment on their hooves.

“Now you see why I can’t go too many wheres,” she beams, crinkling.

Rose’s smile is a full-body experience. Delight wells up in her grin, overflowing her eyes and spilling over her entire face.

In the tack room, standing on a sturdy plank floor worn smooth with time, Rose turns among the neatly arranged bric-a-brac made necessary by a life with horses: hemp lassoes stacked a foot deep on pegs against the wall; buckets of stray stirrups and horseshoes; the pahiolo (saw-knife) Raymond fashioned from her father’s old blade; a wall of hung bridles, some of them brought by her grandparents from Portugal 125 years ago, their bits still marked by a long-dead blacksmith’s hammer strikes.

Her saddles are stacked against a wall all to themselves, her favorites within easy reach. A showpiece made by her husband in 1974 is emblazoned “RF” on the horn, and stamped with scores and scores of roses. High up in the back is her daughter’s baby saddle, tucked away but still available when a child comes for a ride. Closest to the door is the one she still reaches for most, its leather dark and shiny with years of use, the one her mother-in-law gave her when she married Raymond in 1952.

“She said, ‘From one cowgirl to another,’” Rose says.

Rose once lived in this tack room for two years while keeping watch over a horse with a broken leg. The family piled the wash-rack floor with a bed of grass and straw for the horse, then dragged in a pair of lounge chairs in among the saddles and cobwebs for Rose and Raymond. Her husband only lasted a year before moving back into the house, but Rose stayed, keeping a dog and her pistol close by in case of emergencies.

Those cold Makawao nights out in the barn were worth it, Rose says, and she’d do it all over again in a heartbeat.

“My friends all tell me, ‘When I die, I want to come back as one of your animals,’” she winks.