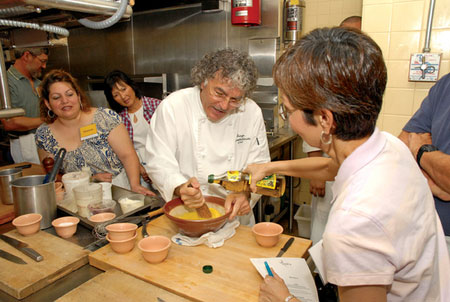 “No short cuts!” Honolulu Chef George Mavrothalassitis promises his students for the day as they tie on aprons. Their classroom is the kitchen at Mavro’s—one of North America’s top-rated restaurants. Stainless steel ovens tower over shelves stocked with neatly labeled spices and puzzling utensils. A giant slab of beef rests beside sharp knives that undoubtedly cost a small fortune—foodie heaven. The class looks on attentively as Chef Mavro demonstrates his grandmother’s no-short-cuts aioli—a laborious recipe utilizing a mortar and pestle. “Everyone else uses a whisk,” he says. “Only in Provence are we crazy enough to make it this way.” A whisk, he claims, is much easier, but gives the aioli a slight bitterness. Huh? Tools affect the taste? Pay attention: this is the type of alchemical secret one can glean from a professional.

If you fancy yourself a quick study in the kitchen—or if you don’t—consider sharpening your skills in a gourmet cooking class. You’ll get to learn trade secrets and, often, savor the results of your research in a terrific meal paired with wines.

Chef Mavro is just one of several professional chefs booked by Gourmet Cooking Hawaii, a Honolulu-based company that hosts private classes for groups of 15. Other chef-teachers hail from the state’s top restaurants: Hiroshi, Sansei, Vino, Roy’s, Sam Choy’s, and Chai’s Island Bistro—to name a few. Company president Kathleen Lin-Hurtubise says culinary expertise isn’t the only factor she considers when booking a chef. “They have to be good with people,” she says. “Introverted chefs don’t work.”

Chef Mavro is no introvert; he gets positively exultant over watercress. “In Hawai‘i we have the best watercress in the world,” he says adoringly. “I always find a niche on the menu for my watercress.” Students are taught to submerge their watercress in ice water so it “comes alive again, as if fresh from the field.” Later they try their luck at rolling brioche dough into malasadas. Never mind that most melt into irretrievable blobs of butter; no one is being graded. The final exam? Lunch with the chef in the restaurant’s classy dining room. Gourmet Cooking Hawaii does it up nicely; after lunch students are presented with a gourmet goody bag and a photo with the chef.

At the annual Kapalua Wine & Food Festival, Chef Ming Tsai of Boston’s Blue Ginger is another natural performer; the Iron Chef champion and festival regular cracks jokes as smoothly as he juliennes peppers. “Squirt bottles are fantastic inventions,” he says as he splashes a trio of wasabi cream droplets onto a plate of miso butterfish. “They allow chefs to charge $29.95 a dish.” Later he reminds the audience that “the idea behind the shows and cookbooks is to inspire you to experiment, not to follow our recipes to a tee.” Still, a little expert know-how never hurt anyone.

Throughout the Wine & Food Festival, chefs from around the nation dish out the advice of hardened professionals. Chef J. Joho of Chicago’s Everest restaurant stunned last year’s crowd when he poached salmon fillets in gently boiling olive oil. He then proceeded to reveal the secret of perfect risotto—aged Arborio rice. In the sumptuous Ritz-Carlton ballroom, two giant screens display the chef’s handiwork to 60 banquet guests. Classes really take off when the panel of Master Sommeliers begins debating which wines work best with each course. Audience members are invited to experiment—courses are delivered as they’re finished on stage, along with six short pours to choose from. These demo lunches are a great way to sharpen your palate. While most of the festival’s cooking experiences are demos, a hands-on lesson was hosted this year by Chef Julian Serrano of the Bellagio’s famed restaurant Picasso in Las Vegas. The event quickly sold out; 30 eager students crammed into the private kitchen of the Ritz-Carlton’s Anuenue Room for warm lobster salad, U-10 Day Boat scallops, and quail farci, with pairings recommended by two notable master sommeliers. Sign up early next year.

On the other end of the island, the Hotel Hana Maui’s guest-artist program often brings great chefs to East Maui. Cookbook author and executive chef at Half Moon Bay’s Sierra Mar restaurant, Craig Von Foerster, recently popped in to entertain guests with an informative cooking demonstration. This year the resort hosted Hana—a Culinary Adventure, a new annual event that draws reputed chefs to the remote locale, where they collaborate on menus using local fish and fruits they harvest themselves. Guests can purchase hotel packages that include invitations to the culinary events.

Don’t think that you have to hit the resorts to get gourmet advice. You can learn to sniff out a syrah from a shiraz, and plate desserts like a pro at Maui Community College’s Culinary Academy. You don’t have to enroll officially as a student, either. Noncredit classes range from a half-day to a series of several evenings, and cost roughly $70. In World-class Wines of Germany and Wines on the Cutting Edge, wine instructor Alan Jahns takes pains to unveil the mysteries of the grape. Students taste 10 to 12 wines per class and learn to casually drop wine-savvy vocab words like “buttery,” “legs,” and “mouthfeel.” Award-winning pastry chef Teresa “Cheech”

Shurilla shares her wisdom in classes such as Plated Desserts from A-Z and Tarts and Pies. Other subjects explored in non-credit courses include sushi-rolling, entertaining, and banquet service. Students benefit from the school’s state-of-the-art equipment and get plenty of hands-on practice.

Unexpectedly, some of the most practical cooking classes are offered by the Maui Electric Company (MECO). What does a utility company know about the gourmet world, you wonder? MECO’s community educator, Ruth Yamamura, explains the connection: “When I first started [at MECO] 30 years ago, microwaves were coming into play. Many people were coming off the plantation and moving into homes with electric appliances. We’d go teach people how to use their electric range, since most were used to using kerosene stoves outside.” Over the years, MECO’s parent company, Hawaiian Electric Company, sponsored a fairly comprehensive culinary program, including cooking classes throughout the state, recipes published in the company newsletter, and even a TV show called Electric Kitchen. You can find decades of recipes at www.heco.com. On Maui, MECO hosts classes twice a year—in summer and before the holidays—in its auditorium. Past guest chefs include Joey Macadangdang of Roy’s, Adrian Aina of the Grand Wailea Resort & Spa, and Lloyd Yokoyama of Broke Da Mouth Cookie Company. Executive Chef Brian Ashlock from the Sheraton Maui recently demonstrated carving and garnishing techniques; carved pineapples served as door prizes. Best of all? Classes are free. Be sure to arrive early for a spot with a good view of the demonstration mirror.